The Pop-Hop Bookstore Opens Under New Owners Amid Pandemic

Rosario Calatayud-Serna, along with three other co-owners, purchased The Pop-Hop, established in Los Angeles, California, in 2010, after its previous owner put the store up for sale due to the COVID-19 outbreak. Since reopening on July 24, Calatayud-Serna told BTW that she and the other owners plan to transform the bookstore’s role in the community. 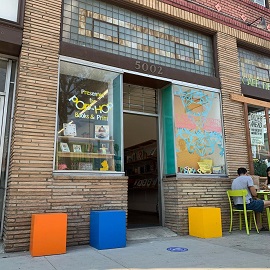 The Pop-Hop's storefront in Los Angeles.

“We are hoping to keep the bookselling retail space while also making the store available as a community arts and education/activism space,” said Calatayud-Serna. “We may shift to nonprofit status at some point in the future.”

The store’s four owners, Jonathan Hinton, Kenzo Martinez, Adriana Yugovich, and Calatayud-Serna, each bring their own specialized experience to the table.“One used to help the former owner at the store, but is by no means a bookselling expert (though he is getting a crash course now). One has run arts/education nonprofits but has not been involved in bookselling specifically," said Calatayud-Serna. "One is a schoolteacher and avid reader. One has been closely involved in LA’s self-publishing world for a number of years, and has the most retail experience of any of us.”

She noted that they were drawn to this bookstore specifically for its potential as a space for community education and activism; bookselling will remain a big part of that mission.

So far, the community response to the store has been strong. Calatayud-Serna noted that customers often say how happy they are to see the store open, and for now, the store’s priority is cultivating community relationships in addition to keeping the bills paid.

But, she added, there are challenges. The COVID-19 outbreak has resulted in limited cashflow, which makes it difficult to purchase new books. While they are able to replenish their used collection, the owners hope to be able to buy new stock before the holiday season.

“We recently joined the ABA and made an account on Bookshop, both of which have made us feel part of a larger community of independent bookstores,” Calatayud-Serna said. “And since we are not in a position to purchase new stock, Bookshop is a good source of a little extra cash flow.”

Overall, The Pop-Hop’s owners are happy to serve their community in a meaningful way. “It also helps that all of the store’s workers are volunteers,” Calatayud-Serna added. “The community has been welcoming and supportive. Our group is enthusiastic, helpful, and supportive of one another, which has also been a blessing.”