A Q&A With Alex George, Author of Wi8’s “One Institute, One Read”

Booksellers who are registered for next month’s Winter Institute will soon receive a complimentary copy of Alex George’s A Good American, courtesy of Amy Einhorn Books/Putnam, an imprint of the Penguin Group. The novel, chosen as this year’s One Institute, One Read title for its insight into the culture and character of Wi8’s host city, will start shipping to all Wi8 bookseller attendees via FedEx Ground on Monday, January 21, in a package bearing a Wi8 sticker. 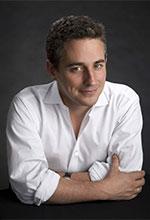 The American Booksellers Association is encouraging booksellers to arrive in Kansas City prepared to discuss The Good American with their colleagues and to come to a conversation with Alex George on Saturday, February 23, from 5:40 p.m. – 6:40 p.m.

George, an Englishman who lives, works, and writes in Missouri, recently spoke to BTW about what it means to be a “good American,” the importance of finding a place to call home, and what the support of indie booksellers has meant to his work.

BTW: A Good American focuses on a family’s journey to find a place to call home. Why did you choose this subject, and why do you think it has resonated with so many people?

Alex George: I am 42 years old and still don’t quite know where home is.

I was born and raised in England, but have lived in the United States for nearly 10 years now. My daughter was born here. I own real estate here; I pay taxes and get summoned for jury duty. Last year I became a U.S. citizen. But is this place my home? Well, in some obvious senses, yes. It is, for example — to take an aphoristic approach to the matter — where my heart is. And yet when I return to England I feel a sense of identity and communion that I will never experience on these shores. I will forever be, in some way, an outsider here. A longing for home — to be somewhere where we truly belong — is a near-universal yearning, and so it seemed like a good idea to write about it.

I think A Good American has struck a chord with many readers because at its heart lies a story that almost every family in America has somewhere in its past. Since the book was published, I have received hundreds of letters and e-mails from readers telling me their own immigrant stories. Many have written to say that when they read this story it felt as if they were listening to their own family members telling their own tale. Because this is a nation of immigrants. As one of the characters in the book says, “We all came here from somewhere.”

BTW: As the title suggests, you also wrote about what it means to be an American, and a good one at that. As a native Englishman, what was it like to write about belonging to another country? Do you think the experience of immigrating to the U.S. helped you see the country through a different lens?

AG: I think so, yes. It was my own experience of moving to the U.S. from England that prompted me to tell this story. Even though my experience of coming to Missouri in 2003 was very different from my characters’ arrival here 99 years earlier, I believe that we probably shared many of the same emotions on our respective journeys. I had mixed feelings about moving here. In an attempt to explore those emotions, I decided to perform a weird act of schizophrenia and split myself down the middle. I attributed all my positive emotions about the move to one character, Frederick, and all the negative ones to his wife, Jette. Then I sat back and watched to see how that conflict played out. In that way I was able to explore many of the contradictions that are inherent in moving away from the place of one’s birth and trying to establish a new life elsewhere. I’m not sure I could have done that if I hadn’t gone through the process myself. And it was significantly cheaper than therapy.

Even now, having lived here for more than nine years, every day I am confronted with small reminders that this is not the country I grew up in. There remains a vast cultural chasm down which I am apt to tumble at inopportune moments. Whether it’s people’s obsession with college sports, Colby Jack cheese, or Sean Hannity, there are some things I guess I’ll just never get. But that’s OK. This country’s richly diverse cultural heritage is one of the things that makes it such an interesting place to live. I value my different perspective.

BTW: A Good American was chosen as the One Institute, One Read title for ABA’s upcoming Winter Institute, to be held in Kansas City, Missouri. This was largely due to the way you captured the culture and characters of the novel’s setting of Beatrice, Missouri. What do you hope booksellers will gain from reading about Beatrice, and what do you hope they will take away from visiting the state you now call home?

AG: Rural Missouri is not, perhaps, the most obvious setting for a novel, but that was rather why it appealed to me. There is something refreshingly unpretentious about this place. It is, some might say, the quintessential “fly-over” state. As such, I hope that readers will come to the novel without too many preconceived ideas about what to expect. Before I moved to Missouri I lived in London and Paris for 13 years. That time in big cities allowed me to appreciate some of the pleasures of small-town living, and I hope that the novel is, in some small way, a quiet hymn to those delights.

Missouri, of course, is known as the “Show Me” State, which I have always found an odd kind of a motto. Skepticism seems to me to be a peculiar thing to celebrate. But don’t be deceived — Missourians do not (for the most part) wander about suspiciously, never taking people at their word. We are a friendly bunch. I hope that booksellers coming to Winter Institute 8 will have an opportunity to explore Kansas City while they’re here. It’s a cool town. As a jazz fan, I like its long and storied role in the history of that music (there is an excellent jazz museum, and it is the birthplace of Charlie Parker.) Also, while they’re here, visitors should, of course, get some good Kansas City barbecue. I would recommend Arthur Bryant’s. That is, as they say around here, some good eatin’. (I can write this down but would never dream of saying it out loud.)

BTW: A Good American is a story of immigration, but not a typical one. Your characters end up in Missouri by way of New Orleans (which, incidentally, was the host city of last year’s Winter Institute). Why did you choose this route, and how did it enrich the characters’ stories?

AG: There were a number of reasons why I decided to have my characters arrive in New Orleans rather than the more traditional route of New York. First of all, I think a novelist should subvert readers’ expectations every so often. Given how synonymous Ellis Island is with immigration stories, I wanted to have my characters arrive in a different port. Also, I needed them to get to Missouri, and a boat journey up the Mississippi was always going to be more interesting than days of endless trundling westwards in a wagon. Most importantly, though, I wanted to show from the very start how different America was from the country they had left behind, and I thought that New Orleans would present the best opportunity of doing that. On his first night in his new country, Frederick ventures out into the French Quarter and hears Buddy Bolden playing jazz. The echoes of that legendary cornet follow Frederick to Missouri and re-ignite his passion for music of all kinds. I couldn’t think of a better introduction to America.

BTW: Indie booksellers have been talking about A Good American both in and outside of their stores since February, when it was the #1 Indie Next List Pick and a handselling challenge was issued by Fairway, Kansas’ Rainy Day Books to see which ABA member could sell the most copies between then and mid-November. What does it mean to you to have the support of so many independent booksellers across the country?

AG: It has been fabulous and rather overwhelming, in the best possible way. During my book tour last February, I visited many wonderful indie bookshops. People love to make gloomy predictions about the state of the industry and ponder the demise of the book, and we all know that the industry faces many seemingly intractable challenges right now. But step into any one of those vibrant, creative spaces and meet the committed, brilliant people who sell books in them, and the doubts vanish. Across the country, independent bookstores are working hard, adapting to changing conditions, and proactively finding ways to succeed in what should be impossible conditions. And they are winning, because in the end there is no substitute for customer service, a warm atmosphere, and experienced recommendations. Visiting an independent bookstore and buying a book (or books!) remains one of life’s deepest, abiding pleasures.

There is no question that being selected as the #1 Indie Next List Pick for February 2012 was the most gratifying of all the accolades I’ve been lucky enough to receive for A Good American. I remember very clearly getting the phone call with that news from my editor, Amy Einhorn. She was as excited as I was. Everyone recognizes the crucial role indie bookstores play in championing books they love. The industry is not, thank heavens, all about corporate mandates and vast marketing spends. Word-of-mouth recommendations from trusted and knowledgeable booksellers still play a huge role in shaping tastes and book-buying trends. For that both readers and writers should be grateful to independent booksellers everywhere.

BTW: Do you have a new project in the works, and can you share some of the details with our readers?

AG: I do. I am hard at work on my next novel. I’m a little wary about saying too much about stuff I’m still working on, mainly because I’m still a little in the dark about it myself. Also, if past experience is anything to go by, it’s liable to undergo massive changes before it sees the light of day. What I can tell you is that it’s a quite different kind of story than A Good American. It’s set in Maine in the 1970s and tells the story of a friendship of two boys. It’s about gravity, and amusement parks, and punk rock. At least for the moment.

Along with The Good American, the package shipping next week to all Wi8 bookseller attendees will include a copy of VISITKC magazine, the official guide published by the Kansas City Convention and Visitors Association, a map of the CAMEX exhibit show floor provided by National Association of College Stores, a mini-guide to Kansas City provided by Lonely Planet, and a cover letter from ABA.