A Q&A With Anthony Horowitz, Author of the #1 Indie Next List Pick for June

Booksellers across the U.S. have chosen Anthony Horowitz’s Magpie Murders (Harper, June 6), a mystery novel within a mystery novel, as their top pick for the June 2017 Indie Next List. 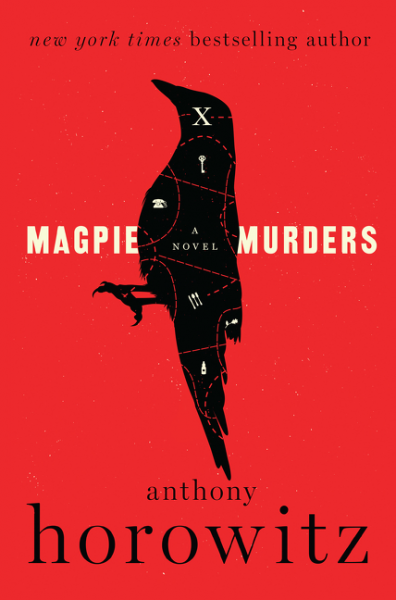 Ken Favell, a bookseller at Books & Company in Oconomowoc, Wisconsin, described Magpie Murders as “a perfect book to read in a cushy chair with a cup of tea (hot or iced).”

“Who better than the talented Anthony Horowitz to create this marvelous mystery within a mystery?” said Favell. “Yes, we’re treated to two mysteries for the price of one: One set in a peaceful village in England during the 1950s with the one and only Detective Atticus Pünd taking the case, and the other set in contemporary times with a book editor who becomes an amateur sleuth. Horowitz pays tribute to the golden age of British crime fiction with references to mysteries created by the likes of Dorothy Sayers and Agatha Christie.”

Horowitz has written more than 40 books, including Trigger Mortis, a James Bond novel commissioned by the estate of Ian Fleming, and two Sherlock Holmes novels commissioned by the estate of Sir Arthur Conan Doyle: The House of Silk and its sequel, Moriarty. He is also the author of the bestselling Alex Rider books, a series of spy thrillers for young adults. As a television screenwriter, Horowitz created the British crime dramas Midsomer Murders and Foyle’s War, which are featured in the U.S. on the PBS series Masterpiece Mystery.

Here, Horowitz talks about his inspiration for writing two mystery novels in one, what he likes about the mystery genre, and what booksellers can say to hand-sell his new book.

Bookselling This Week: Where did the idea to write two mystery novels in one begin? 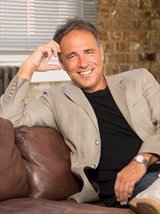 Anthony Horowitz: It was inspired partly by my love of Sherlock Holmes and by the fact that Sir Arthur Conan Doyle created the greatest detective in fiction ever but disliked him and thought he wasn’t worthy of his talents, and so he got rid of him by hurling him off the Reichenbach Falls. That gave me the idea of writing a story about a writer, Alan Conway, and a detective, Atticus Pünd, and exploring the relationship between them. From there, I immediately knew that it was going to be a book within a book. There would be the book that the writer was writing and the book that I was writing about the writer.

BTW: When you are writing a mystery, especially one as complex as this, how do you puzzle out the story? Do you have a system or use storyboards?

AH: I don’t use boards. I don’t like them. I use notepads and I do doodles and drawings and diagrams. On my desk right now, I have a notebook which has, I think, 14 or 15 pages of squiggles, diagrams, notes, and questions to myself. I have to see the book — it has to be sort of drawn before I can begin writing it. The trick with Magpie Murders was to write a book that on one level is incredibly complicated but is also a very easy read. To me, a whodunit fails if you find yourself flipping back and forth wondering what’s going on.

BTW: What do you like about mystery novels and what do you think makes for a good mystery story?

AH: I don’t really read a lot of mysteries anymore because it would interrupt my thinking processes and I worry that I would start taking ideas from other people. When I was younger, I read from the golden age of detective fiction: Agatha Christie, Dorothy Sayers, Margery Allingham, and other writers. Ellery Queen was a huge favorite of mine, and what I loved was the ingenuity of it, the chase, the sense of beguilement. I’ve always loved magic, illusion, secret passages, things that aren’t quite what they seem. This has been my passion since I was a boy and that’s what you get in a good murder mystery. I can’t think of a genre of writing that offers such optimized pleasure.

To me, it’s not enough to write a whodunit. I love whodunits, but my thinking is this: If you are going to read a mystery, you should get more out of the book than just “The butler did it!” in the last sentence. A whodunit can be an opportunity to do other things, and I’ve become very interested in the whole world of murder mystery and why there are so many murders in literature and in drama, why we have such an obsession with detectives, how whodunits work, how they are written, the nature of writing. This is something I’ve begun to explore in the book and I hope it’s sort of an added bonus. Ideally you want more than just a series of clues and red herrings; you want some thought and introspection going on as well.

BTW: Would you say mysteries by British writers have a certain point of view or certain characteristics that distinguish them from mysteries of a different origin?

AH: I think that the British do the murder mystery very well. Obviously, we have a great tradition: Agatha Christie, for one, Sir Arthur Conan Doyle, Ruth Rendell, and many others. One of the reasons for this, I guess, is that we tend as a race to be less emotional than maybe you are in America: we are less upfront with our emotions, we’re more restrained, more secretive, we have more to hide. We are, in many ways, a more repressed nation. That is very helpful if you are writing about people who are hiding and who are hiding, possibly, murder. Also, villages are very peculiar places. They are small: everybody in an English village is linked, everybody knows everybody, and yet there are also a great many emotions seething around the village green and that can lead to extremes of violence and death. So I think there is something about the English character, the topography of our country that does lend itself very, very well.

BTW: How did you create the character of Atticus Pünd?

AH: Obviously, he’s influenced by Hercule Poirot. I found it quite difficult to escape from his shadow. There are elements of Holmes in him as well, and I felt at times he even had a bit of Father Brown in him. He’s one removed from me because I had to create Alan Conway, the writer who had to create Atticus Pünd; he’s like a character within a character, and he wasn’t easy to draw.

I think the most successful aspect of him is the fact that because he had been in the camps in the Second World War and has this sort of acquaintanceship with the greatest evil that man can do, it gives him quite an interesting edge that I think other detectives might not have.

BTW: The character of Alan Conway is somewhat of a literary snob who values literary fiction above the mystery/thriller genre novels he actually writes. Were you attempting to explore this prejudice in Magpie Murders?

AH: That begins with Doyle. Sir Arthur Conan Doyle had written Sherlock Holmes but he really wanted to write historical romance. He thought the books of his that people would be reading were The White Company and Micah Clarke. These were the books he thought were classics but which we now in the 21st century have completely forgotten. I understand that antipathy because other writers have had it, too. Ian Fleming and James Bond, Agatha Christie and Hercule Poirot. Christie had some quite cruel things to say about Poirot; she called him “a detestable, bombastic, tiresome, ego-centric little creep.”

I think the relationship between an author and his or her creation is an interesting one. Look at me with Alex Rider, I’ve got a 14- or 15-year-old boy who is loved by millions of people, who saves the world time and time again, and I sit here in my London office at age 62 and sometimes I’m jealous of him, so I get it. But within Magpie Murders, I am not for one minute decrying crime fiction. I love crime fiction. Magpie Murders is not a book that is attacking the genre.

BTW: Booksellers voted Magpie Murders the number one Indie Next List pick for June. What advice would you give to booksellers when it comes to hand-selling your book?

AH: I would say the headline is: It’s two mysteries for the price of one. I have been told the book is very enjoyable because nobody has yet managed to guess either of the solutions, even though it is possible to guess the ending of one of them from the very first page. The clues are all there but people are being tantalized and puzzled and they are enjoying it. I would also add that I’m so happy to have a very handsomely produced book out there on the shelves. We live in a time when booksellers are at risk, independents in particular, and I said this before: a High Street without a bookseller is a High Street without a soul. So I am very hopeful that this book will bring profits and pleasure to booksellers and their customers.