Wade Hudson and Cheryl Willis Hudson, the editors of the upcoming children’s anthology We Rise, We Resist, We Raise Our Voices (Crown Books for Young Readers, September 4), will appear at the sixth Children’s Institute (Ci6), which will be held June 19–21 in New Orleans. 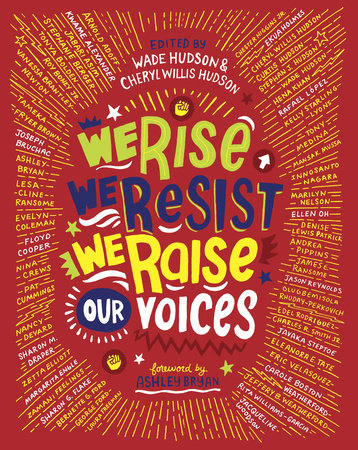 The Hudsons, who are married, are the founders of Just Us Books, a leading publisher for 30 years of black interest and multicultural books for young readers. They will appear at the institute in conversation with Phoebe Yeh, their editor at Crown Books for Young Readers, and author Kwame Alexander, a friend of the couple and a contributor to the collection. Each will share their perspective, encouragement, hope, and inspiration to help parents, educators, and young readers ignite lasting change in their communities in an increasingly polarized country that, since the 2016 presidential election, has seen a rise in overt racism and government policies that support xenophobia.

The book will launch on September 4 with an event at the Schomburg Center in New York City; September also marks the 30th anniversary of Just Us Books. The Ci6 keynote “We Rise, We Resist, We Raise Our Voices!: Phoebe Yeh in Conversation with Cheryl Willis Hudson, Wade Hudson, and Kwame Alexander” is scheduled for Thursday, June 21, from 10:15 a.m. to 11:00 a.m. in Room Grand D at the Sheraton New Orleans.

Here, Bookselling This Week speaks with the Hudsons about their new anthology in partnership with Crown.

Bookselling This Week: How did you get the idea to do an anthology in this format?

Wade Hudson: The idea came following the presidential election. I was on Facebook reading some of the posts by people who were upset and devastated by the results of the election, and I ran across a post written by my niece. In the post she said how devastated her six-year-old daughter, Jordan, was because she had heard all of the vile and nasty things that the President-elect said about people of color, immigrants, and people with disabilities, and she was frightened about what would happen to her and her family and friends.

I thought about how there are a lot of other children like her who feel the same, who are devastated and wondering what the future is going to be for them, and I started thinking: What can we do to let them know that it will be ok, in spite of what the trend is in terms of upsetting the norms of the country? How can we support them? How can we offer them words of encouragement and love and let them know that we will be there with them and that eventually it will be ok? That we’ve been through struggles like this one before and that we’ve come through as a nation? Since we’re writers and we have a lot of writer friends, I thought maybe we could bring them in to share their words of encouragement to let children know that it will be ok.

We sent letters of inquiry to a number of our friends about the idea for the anthology and selected a title, and the response was phenomenal. Everybody wanted to participate. In fact, the response was so great that we really didn’t get through our long laundry list of names we wanted to reach out to.

BTW: Where did the title We Rise, We Resist, We Raise Our Voices come from? Did you start out intending to incorporate the term “resist” into the title?

Cheryl Willis Hudson: When we did the call-out, we didn’t ask for essays or poems on any particular subjects from the writers who contributed something. We just had a word count, but the words “resist” and “lifting voices” came up several times in the entries. An entry by Rita Williams-Garcia is kind of an explanation of the Preamble to the Constitution — “We the People” — and she talked about raising voices. The same thing comes through in an essay by Bernette Ford that talks about lifting voices in the Civil Rights struggle of the ’60s. So the frame was there in terms of lifting voices and resistance, and after a few variations that’s the one that came together.

WH: The initial title that we sent to potential contributors was “What Shall We Tell Them?” What they contributed actually answered that question, but we changed the title as we moved forward with the book.

BTW: Did you get any responses from these authors and artists that you didn’t expect to get? Anything that came out of the blue or was especially creative or radical?

CWH: I wouldn’t say any of them were radical per se. All of them were delightful, like, oh wow, this is an interesting take! Marilyn Nelson wrote a poem titled “It Helps to Look at Old Front Page Headlines,” and that was the perspective that when you’re dealing with the news of today you can look back into the past and get some lessons from that. Another one was called “You Can Change the World.” So the themes were mostly familiar to us.

One piece that was very interesting was the artwork that Innosanto Nagara contributed. He illustrated a piece, “Where Are the Good People?” If you remember Mr. Rogers, he used to say to look for the good people, look for the helpers. That was also the theme in the poem by Tamika Fryer Brown, which illustrated the tumbling of a Confederate statue. I think that idea came out of his experience in Indonesia and the tyrannical rule there, so it’s an interesting juxtaposition of resistance and civil disobedience and what was happening in Charlottesville.

BTW: What topics will you be discussing with Phoebe Yeh and Kwame Alexander during your keynote at Children’s Institute?

WH: We’ll be talking about how the book came to be, the process of putting it together, of matching the illustrations and the text and working with the various authors. There are 50 contributors, so the volume of work was great, so we’re going to share some stories that evolved as we put this project together. We’ll talk about what we feel this book can do once it is in the hands of children and parents and educators.

CWH: There’s a tremendous amount of diversity in the pieces — even though the call was for “What Shall We Tell Them?” each author came up with a unique perspective through poetry and letters and essays and photojournalism, so it was really interesting to curate a collection like this.

BTW: Do you have any advice for booksellers on presenting this book and its content to kids?

WH: I think we will probably share some thoughts about how to position the book, how to present it in the store, and some marketing ideas that will come from Cheryl and me but also from Phoebe and Kwame.

CWH: We’ve had a relationship with Kwame for quite a while; we were friends with his father. Early on in the beginning of our company we established ourselves as independent publishers; Kwame’s father was also an independent publisher, so we go back a number of years and we’re also from the same area of Virginia. But again, the contributions to this anthology show the importance of diverse books, that diverse books are not just for diverse people or people of color. I think the anthology is something that will appeal to classes and classrooms and discussions all over the country because we are really a diverse nation and there is so much diversity in this collection.

BTW: What have you learned by doing this project?

WH: For me, I was devastated by the results of the election and concerned about our country and the attempt to roll back some of the changes that were hard-fought and earned over the decades. I was feeling low. But in working with the contributors and trying to come up with an anthology that put a positive spin on the future if we resist and embrace raising our voices, I started to feel better about moving forward in spite of the challenges. It put me back in touch with some of the challenges I faced when I was younger and recognizing how we came through some of those, not necessarily the way we would have wanted them to end, but that was progress. So at the end of this project, I came away feeling encouraged and more hopeful than when we first started.

WH: What we hope to do with this anthology is to encourage children and to let them know that they are loved, they are supported by a vast number of folks, whether they are writers, parents, or teachers. We see what is happening with the resistance movement now and, fortunately, how many young people have stepped up and are fighting for the future of this country as well. That’s also an indication that we’ll be ok and we’ll get through this.