Independent booksellers across the country have chosen The Glass Hotel (Knopf) by Emily St. John Mandel as their number-one pick for the April 2020 Indie Next List. 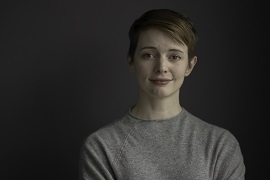 Mandel’s novel follows a cast of characters over the course of their lives, as they work in the service industry and international shipping, go to underground electronica clubs, come into extraordinary wealth, and weather the extended aftermath of a collapsed international Ponzi scheme, all while being inexplicably haunted by their pasts.

“In this ghostly story of ignoring what’s right in front of you, a group of characters try to grapple with what seems like inevitable choices. Mandel’s book is like the glass in the title: her language glitters while offering clarity and reflection, and her characters are like broken shards, mesmerizing in one light and dangerously ordinary in another,” said Marika McCoola of Porter Square Books in Cambridge, Massachusetts. “Combining the humanity and structure of Station Eleven with the brutal realism of her earlier works, The Glass Hotel is an exceptional novel.”

Bookselling This Week: Where did the idea for The Glass Hotel come from? 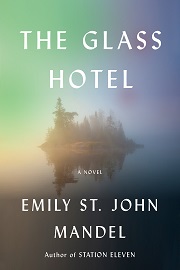 Emily St. John Mandel: The starting point for the book was that I was fascinated by the Bernie Madoff Ponzi scheme. I didn’t find the actual people involved in that crime particularly interesting — if you read interviews with Bernie Madoff, he just seems like a garden variety narcissistic sociopath. But the crime was fascinating to me. At the time the story broke, I was an administrative assistant at a cancer research lab, and I really adored my coworkers. I started to find myself thinking about the kind of camaraderie you have with any group of people, particularly coworkers, and how much more intense that camaraderie would be if you were showing up to work on Monday to perpetuate a massive crime. Who are those people? Who would perpetuate a crime like that?

It was originally just going to be a novel about white-collar crime and people caught up in this massive fraud. But I don’t write from an outline. That has definite positives and negatives. It means my first draft is actually kind of a mess, but it also means there’s a real possibility of surprise. Sometimes the book can take an unexpected direction for me, and that was definitely the case here. As I started writing the book and going through round after round after round of revisions, it morphed into a ghost story where the financial crime was only one element. So, I would say the starting point was actually quite different from where the book ended up.

BTW: This book is set in many different places, but the main setting doesn’t seem to be a physical place at all. It’s an idea that Vincent makes a reference to — money as “its own country.” Why did you decide to center the story on wealth?

ESJM: I think it came from the starting point of the Ponzi scheme. If you’re writing about a financial crime, then you’re automatically writing about money, and money is something we think about all the time but don’t always talk about. In terms of this idea of money being its own country, that’s something I’ve been thinking about for a while. It’s this idea that money can lend this sameness of experience across multiple geographic locations. It can kind of feel like its own space that you enter into.

Back in October, I had a couple of trips to Los Angeles because I was working on a TV project, and I have a crazy number of miles on Delta from all the touring I did for Station Eleven. On two occasions, I used the miles to upgrade to Delta One, which is their highest class of service. And what that experience did in practical terms is I would leave Los Angeles at 10:30 p.m., take a five-hour nap in a lay-flat bed, and wake up in a plane landed in New York. Both times I did that, it was like the luxury rendered the distance unconvincing. I would wake up from a five-hour nap and sometimes I wouldn’t really believe that I was in a different city. It was like the luxury of the experience made the travel so frictionless that it didn’t really feel like travel. I think if you live in a bubble of extreme wealth, your life probably doesn’t feel very different in Singapore than it would in London or New York. I think to some extent, changing location could feel like a change of backdrop.

BTW: While Paul isn’t exactly the main character of the story, he provides a point of access and is the first character we get to know. Why did you start with him?

ESJM: He’s a bit of a red herring, isn’t he? He was actually a really late addition to the book, but I was writing toward him through a lot of the drafts. There were early drafts of the book where Jonathon Alkaitis had a son who was very much like Paul — a little bit derelict, first-world problems. But part of Paul for me was filling in Vincent’s backstory. He was also an interesting avenue for me to write about ghosts, which was something I was thinking about while writing this book. I lived in Toronto in the late ’90s and I remember the club scene there. I was never into drugs myself, but I certainly knew people who were, and I remember these periodic waves of bad ecstasy pills going around. I guess it haunted me a bit, and I liked the idea of telling a ghost story around that with Paul.

BTW: In this book, ghosts aren’t just the dead — they’re also the past. What made you want to explore this idea?

ESJM: To be honest, I don’t really remember the moment I was like, wait a minute, let’s have Alkaitis see ghosts, which, from there, balloons out to all the ghosts that you see in the novel. But I found it interesting to think about different kinds of hauntedness. When we use the phrase “ghost story,” we tend to think about it in the classical sense, the spectral hooded figure glowing down the hallway. But it can be interesting to think of different ways of being haunted. There are “classical ghosts” in the book, like the figures Alkaitis sees, or the way Paul might or might not be seeing that kid Charlie who died at the club. But I feel like all of us are probably haunted by bad decisions that we made earlier in our lives, things that we shouldn’t have said, moments that we weren’t kind. That can be a kind of haunting, the way those things preoccupy your life. An idea that I find really interesting that I go into pretty deeply in the chapters about Alkaitis in prison is this idea of the counterlife, the life he didn’t live. I like this sinking notion of a life being haunted by a life you didn’t live. So, when Alkaitis is having these sort of dreams or visions in prison where he actually got away with it and is in Dubai, I liked the idea of it becoming less and less clear that those are just dreams. It was really interesting for me to write about different ways of being haunted.

BTW: After deciding to pose as Alkaitis’ wife, Vincent finds a friend in Mirella. Their friendship is in many ways one of the more honest ones in the book. How did you craft their dynamic?

ESJM: I saw them as not quite having a shared secret, but they have a shared knowledge because they both grew up without money. And here they are as almost interlopers in the country of money. They’re relationship is kind of like being in a foreign country and finding a fellow New Yorker. They’re compatriots, and while Vincent is literally an immigrant from Canada, they’re both sort of immigrants from the world of no money. I saw them as having a close bond partly based on that. But what I was also thinking about with them was the way a close friendship can have an element of romance, not necessarily in a sexual way, but the way you can be in love with someone in the sense that you absolutely adore having them as a friend and want to spend time with them. That was one of my favorite relationships in the book.

ESJM: I just started a new novel that I’m not far into at all. I’ve also been working on a television adaptation of The Glass Hotel. Right now, I’m working on the pilot script for that, and it’s been fun. I love writing novels, but after five novels it’s fun to try something different.