A Q&A With Gary Fisketjon, Editor of Kent Haruf’s “Our Souls at Night,” June’s #1 Indie Next List Pick

When Kent Haruf died on November 30, 2014, at the age of 71 from terminal lung disease, he was only a few days away from finishing copyediting on his final novel, Our Souls at Night (Knopf), booksellers’ #1 pick for the June 2015 Indie Next List. 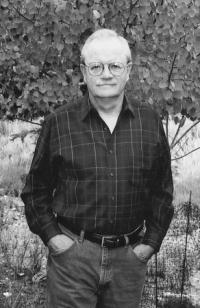 The novel about a widow and widower finding each other late in life takes place, as all of Haruf’s books do, in the fictional town of Holt, Colorado, the state where Haruf lived with his wife, Cathy, until his death. Among the subjects it explores are the definition of family, the power of human connection and community, and human fallibility and forgiveness.

In an interview with Denver Centerstage a few days before his death, Haruf said of Our Souls at Night: “I want to think that I have written as close to the bone as I could. By that I mean that I was trying to get down to the fundamental, irreducible structure of life, and of our lives with one another.”

Mark Ingraham of Powell’s Books in Portland, Oregon, who was among the booksellers booksellers nominating Our Souls at Night to the Indie Next List, said, “As in a minister’s benediction, Haruf extends a wise and compassionate resolution to this story, the quintessence of his life’s work.”

Gary Fisketjon, Haruf’s longtime editor and friend, recently spoke to Bookselling This Week about the author’s legacy and his final book. 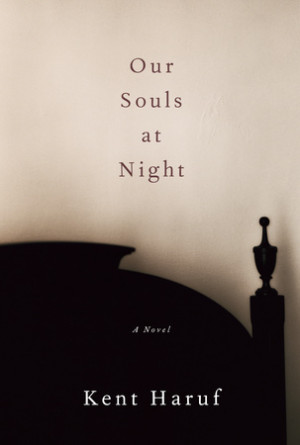 Bookselling This Week: The story of Our Souls at Night examines what happens at the end of a life: Is redemption from a life of mistakes possible? How important is this redemption and what is its meaning even, if your soul is at peace? Besides these questions, what are some of the others this book explores?

Gary Fisketjon: The question of whether redemption is possible after a lifetime’s worth of mistakes cuts to the very core of Kent’s previous novel, Benediction, in which the fatally ill Dad Lewis is wrestling with that very thing, particularly with regard to his son.  In Our Souls, of course Addie and Louis share their regrets and sense of failure, which I think is part and parcel of growing old or even growing up, and certainly this self-accounting is also involved and even heightened when people are falling in love. But the main concern of this novel, it seems to me, is whether life can be resumed after so much of it has already been lived. Do we have this capability within ourselves? If so, how vulnerable is it to the strictures of family and friends and community? The first question is answered affirmatively here, while the second is the complication — even violation — at the heart of this novel.

BTW: Was Kent aware he was sick when he wrote this book? Did he think of Our Souls at Night as his last book? To you, does the book take on greater meaning in the context of his passing?

GF: Kent knew he was dying as of February 2014, he just didn’t know when… In his last interview, within the week of his death, Kent explained what a pulmonologist had told him: “You may just smolder on for a while ... until you stop smoldering.”  Then, on May 1, he started writing this book, with no reason to think he’d live to finish it — only the will to do so. He certainly knew as he worked on Our Souls that it would be his last book, though the writing itself, and then the editing and even the copyediting, seemed to keep him alive in some strange way.

Now, finishing a book is, for any author, always a draining experience: You’re worn out and almost overnight have nothing in front of you, after months and years of having that one thing sitting there waiting for you to get back to work. Given Kent’s condition, I was fearful that he might become depressed and, to counter that possibility, for the first time I gave him a notion of a new book, and he was making notes on that only days before he died. So when this long-expected death finally arrived, I believe it took him by surprise. But at that point he knew he had no strength left to fight it off yet again, and in fact he died on the fourth anniversary of the onslaught of one medical calamity after another.

This book certainly has great, great meaning and importance for me — first because it’s a very different sort of book from his others. Also, I’m sure, because of his illness, his death — the shock and horror of losing a dear friend. I’ll never be able to reread or think about Our Souls outside of that context.

BTW: What are some themes in Kent’s writing that show up in this book and that are consistent throughout his oeuvre?

GF: Well, certain concerns abide in Kent’s fiction, chief among them: What if the ties that bind — foremost, those within families — unravel instead?

That’s what happens to the teenaged (and pregnant) Victoria in Plainsong, and what imperils six-year-old Jamie and his grandmother in Our Souls at Night. In fact, this — or worse — happens anew throughout Kent’s novels. Or what if, within a close community, someone dares to question perceived truths? Consider here the travails of Reverend Lyle in Benediction. There often is, I believe, a naive assumption that the small town where these books are set is somehow immune from all the modern calamities that are visited upon the rest of the country, but Kent recognized that as a self-important falsehood. Holt, Colorado, is not a place where good, decent people do good, decent things as they supposedly did in the good old days, however indecent those days actually were. Life here isn’t a different, special, and local version; it is merely life itself. As such, it is marked by loss, regret, and death, just as it is everywhere else. And these feature in Kent’s writing for the simple reason that these blights are always there, however much we try to ignore that fact and just pretend it isn’t so. But even in Benediction, where those hard truths are paramount, there are other countervailing things — contributing factors, you might say — that were every bit as important to him.

A great hallmark of Kent’s is his subtle grasp of the various communities that emerge in place of — or even despite — the conventional, expected ones: Two old bachelor brothers taking in young Victoria and then, along with her newborn baby, making their own distinctive family, whose ties do bind. In this new novel, an aging widow having the courage to ask an aging widower to risk making a new life for themselves, so very far down the line. Kent’s deepest hopes reside in friendship and love and community, however contrary and idiosyncratic; in our ability to at times become our better selves despite all the odds. Kent never once seemed to me embittered in any respect, and thus his work never will.

BTW: What was it like to work with Kent over the years? In particular, what was your experience like working with him on this last book?

GF: A sheer pleasure. Kent was serious about his work, I’m serious about mine, so that’s a level field we both enjoyed meeting on, a rewarding experience from start to finish, thanks to him (and I’d like to think he tolerated my participation).

With Our Souls at Night, we were once again back on the horse, with the only difference being that we now had an indefinite but literal and pressing deadline. As before, Kent had revised the book several times before I read it. As before, I gave him every comment I could offer. As before, he had the last word on those suggestions (with his wife, Cathy, as his indispensable amanuensis). Except for the incredible time pressure, the editing process was the same as it had been for the three previous novels that Knopf was so fortunate to have published. Nine weeks after this all began, Ken finished going over the copyediting — around Thanksgiving, as it happens — and died the following Sunday, November 30.  A shock and heartbreak I’ll never forget.

BTW: In your view, what will be Kent’s legacy as a writer?

GF: To tell you the truth, I’m too caught up in my work with individual writers to ever step back and claim an impossible objectivity and reckon what their reputations or, god forbid, legacies might amount to. I’d bet my life that none of them have ever done this, either.

The future is always the next book, regardless of the success or failure of the most recent. The future is always starting all over again, doing something new, defying once more the laws of physics in creating something out of nothing. That is a supremely daunting task, and wondering about what posterity will end up making of you and your work only gets in the way.

But certainly Kent knew what he wanted to accomplish as a writer. And he had the rare opportunity to summarize his goals in that last interview, with John Moore of the Denver Center for the Performing Arts, which staged Benediction in February of this year. When asked very directly about this, Kent told Mr. Moore: “I do want to be remembered as someone who was loving and compassionate toward other people. And the older I have gotten, and the closer to death I have gotten, people have grown more and more dear to me so that now I want to be completely present when I am with anybody. I can’t say that has always been the case. It hasn’t been. And as a writer, I want to be thought of as somebody who had a very small talent but worked as best he could at using that talent. I want to think that I have written as close to the bone as I could. By that I mean that I was trying to get down to the fundamental, irreducible structure of life, and of our lives with one another.”

That really says it all, with Kent putting the human being first and the writer second. By explaining himself with humility (less credit than he’s clearly due) and grace (which was natural to him) and honesty (to me some of it seems a bit harsh). By talking about what I was trying to do instead of pronouncing on what I have done... Needless to say, I think it’s obvious from all the years we had together, and from the outpouring of sorrow and love upon his death, and in the reaction people are having to this last book, that what he had hoped for is indeed what he delivered to us and exactly what he will be remembered for.

And every day his presence is and will always be something I gravely miss, but I have had the great good fortune to have been his friend, to have witnessed how this man made something out of nothing over and over again, how he showed us truly what life has to offer, both the bad and the good. And for this I will thank Kent as I’m long as I’m around to do it — gratefully, sadly, happily, the whole gamut.