A Q&A With John Green, Author of the #1 Winter Kids’ Indie Next List Pick

Booksellers have chosen John Green’s newest novel, Turtles All the Way Down (Dutton Books for Young Readers), as their number-one pick for the Winter 2017–2018 Kids’ Indie Next List. 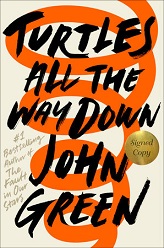 Green’s first book in the five years since 2012’s The Fault in Our Stars, Turtles All the Way Down is a deeply felt, heart-wrenching novel about learning how to live when the inside of your own head is a scary place to be. Its publication on October 10 inspired midnight release parties at indie bookstores across the country; since then, it has become a New York Times, Wall Street Journal, USA Today, and international bestseller.

Turtles All the Way Down tells the story of Aza, a 16-year-old suffering from obsessive-compulsive disorder, which results in the constant, inescapable worry that she is developing C. diff, a deadly bacterial illness. She and her best friend, Daisy, set out to win the $100,000 reward offered for finding local missing billionaire Russell Pickett; during the search, Aza crosses paths with an old childhood friend — Pickett’s son. As Aza attempts to solve the mystery and deal with growing romantic feelings, she must struggle to keep the ever-tightening spiral of her own thoughts from taking her all the way down.

“Turtles All the Way Down has all the hallmarks of John Green’s work: an elusive mystery, offbeat but endearing friendships, and a healthy worship of nerd culture (this time Star Wars fan fiction),” said Sami Thomason, a bookseller at Square Books in Oxford, Mississippi. “This long-awaited new novel is an intimate examination of living with mental illness, an issue which with Green shares a personal relationship. Avid fans can expect to laugh, cry, and pass this book on to everyone they know; Green’s words are the kind that are best shared.” 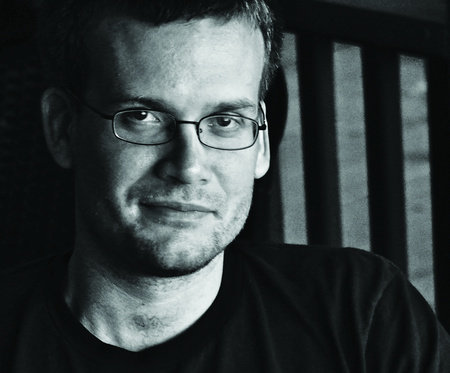 Green’s other bestselling, award-winning novels are Looking for Alaska, An Abundance of Katherines, Paper Towns, and Will Grayson, Will Grayson (with David Levithan), and his numerous literary awards include the Printz Medal, a Printz Honor, and the Edgar Award. He has twice been named a finalist for the L.A. Times Book Prize and was selected by TIME magazine as one of the 100 Most Influential People in the World. Green is the creator of

Vlogbrothers with his brother, Hank, and the co-creator of the online educational series Crash Course. He lives with his family in Indianapolis, Indiana.

Bookselling This Week spoke with Green about book recommendations he’s received from indie bookstores, where he first heard the phrase “turtles all the way down,” and the difficulty of finding words to describe pain.

Bookselling This Week: This is your first novel since The Fault in Our Stars was published in 2012. How do you feel now that indie booksellers have chosen your long-awaited new book as the number-one Kids’ Indie Next List pick for Winter 2017–2018?

John Green: It means so much to me, especially because I have benefited so much as a reader from indie booksellers’ recommendations. It was through a bookseller recommendation at Square Books in Oxford that I came to read The Untelling by Tayari Jones. I read Rachel Kushner’s The Flamethrowers because it was recommended at Malaprop’s in Asheville. And here at home, Kids Ink has recommended so many great books for our kids. While on tour for Turtles All the Way Down, I visited Mitzi’s Books in Rapid City, South Dakota, and the Country Bookshelf in Bozeman, Montana. I’ve LOVED the books that were recommended to me by booksellers at those stores, including Dear Martin by Nic Stone and The Gods of Gotham by Lyndsay Faye. My reading life (and my family’s) is enriched so much by thoughtful, human-to-human book recommendations, and so to have my book highlighted by this wonderful community is really gratifying.

BTW: Turtles All the Way Down has been described as the book that, more than any of your others, most deeply dives into mental illness. You have been public about your struggle with severe anxiety and obsessive-compulsive disorder for a long time. Was it hard to write about something this personal? Have you always wanted to write a book that took on OCD?

JG: For a long time, it felt way too personal to write about, like writing about it would give it even more power and presence in my life. But eventually it became the only thing I could write about. For a variety of reasons, I was desperate to find some kind of direct form or expression for the experience of having your consciousness hijacked by intrusive thoughts. But I also felt all along like I was writing a novel. Aza’s challenges are vastly different from mine, and I wanted to put the reader as deeply as I could inside her head, which is very different from allowing the reader into my head.

BTW: One idea presented in the book is the failure of human language to describe emotional pain, or any kind of pain, really. When Aza is in the hospital, she says, “You lie there not even thinking really, except to try to consider how to describe the hurt, as if finding language for it might bring it up out of you. If you can make something real, if you can see it and smell it and touch it, then you can kill it.”

Words seem to fail Aza a lot, at least out loud. Do you usually feel more of an affinity toward writing introverted characters than those who are more extroverted?

JG: I definitely like writing from inside the perspectives of people who are extremely attentive, but that can mean very different things. In The Fault in Our Stars, Hazel is a really empathetic and outwardly focused person, and that was fun to write because she can see other people with something like clarity. In this book, Aza really struggles to pay attention to anything outside herself, because she can’t escape the world within, teeming with trillions of cohabitants. But I also think that no matter who you are, there are places where language struggles, and pain is one of them. Pain — especially physical pain but I think also psychic pain — is so abstract and internal and way-down that it’s difficult to find direct expression for it. So we almost always approach it through metaphor — we say that pain is like an icepick or like a punch in the gut, like a weight on our chests or like an ever-tightening spiral. The challenge for Aza is to find some language for the pain that will allow her to see it well enough to understand it and also to SHARE it. Part of what makes pain so horrifying, at least in my experience, is that it can be so isolating, because it’s so difficult to share.

So what I really hoped was that somehow the reader could travel with Aza deeply enough to understand not just what the pain is like, but maybe glimpse what the pain IS.

BTW: It takes more than 200 pages for the reader to learn the meaning of “turtles all the way down,” which comes from a story told to Aza by her best friend, Daisy. “You’re trying to find the turtle at the bottom of the pile, but that’s not how it works,” says Daisy. When did you first hear of that story and why did you decide to use it in the book?

JG: I first heard this story in a religion class in college, and I thought it was a story about how stupid superstition is. But then years later, I came across it again while watching The Art Assignment, the PBS Digital show my wife hosts. And now it came to me with a different meaning, because I realized that so often when I was stuck inside an obsessive thought spiral, I was looking for the bottom turtle. But there is no bottom turtle. It’s turtles all the way down.

BTW: You’re involved in a lot besides writing novels, from the Dear Hank & John podcast to Vlogbrothers to Project for Awesome. Can you give our readers any news regarding what you’re working on now, literary or otherwise?

JG: I am working on a few things — we’re recording a new series of videos about literature for our educational channel Crash Course, and working to improve our free curricular materials for high school history students. I’m starting to think about what I might write next, but who knows. If I learned anything in the last six years, it’s not to promise a new book will be coming soon, because they always take longer than I expect.

BTW: Finally, what has it been like interacting with indie booksellers and readers on your tour for Turtles All the Way Down?

JG: It has been such fun, and also so professionally invigorating. I love being able to talk with people about books and authors we love, and since I’ve known many of the people who hosted the events for over 10 years, it’s also a great opportunity to catch up. Plus, I can always snag a few great book recommendations.