A Q&A With Katherine May, Author of December’s #1 Indie Next List Pick

Independent booksellers across the country have chosen Wintering: The Power of Rest and Retreat in Difficult Times by Katherine May (Riverhead Books) as their number-one pick for the December 2020 Indie Next List. 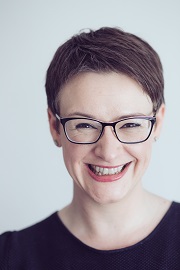 Drawing on solstice celebrations and dormice hibernation, beloved literary figures, and her own personal experiences with what she called “wintering,” May’s book offers a guiding philosophy for transforming the hardships that arise before the ushering in of a new season.

“When we all started our own ‘winters’ in March, some of us were more prepared than others,” said Emma Warren of Oblong Books & Music in Millerton, New York. “May writes delicately of the struggles of life and the ways we may be able to prepare ourselves for such times, something I feel we all need to learn in order to survive the emotional winter that is a worldwide pandemic. Grab a cup of tea, find a cozy blanket, and burrow into this book of thoughtfulness and comfort.”

May is a writer of both fiction and nonfiction. Her journalism and essays have appeared in a range of publications, including The Times (London), Good Housekeeping, and Cosmopolitan. She lives by the sea in Whitstable, England, and is an avid lover of the outdoors.

Here, Bookselling This Week talks with May about the inspiration behind writing this book.

Katherine May: It came into my head all at once while I was talking to a friend who was going through a tough time — I suddenly realized how well I knew her state of mind. It struck me that this was an almost animal experience, something innate to us as humans, but which we can hardly bear to look at. I found myself saying “you’re wintering!” and then I had to go home and spend some time writing in my notebook to understand what I meant by that. It felt urgent to share this idea that there’s commonality in our suffering.

BTW: Can you define what “wintering” means to you? 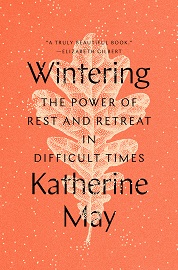 KM: Wintering is a time when life is frozen, when everything stops and you feel as though the world is carrying on without you. It might come from an illness or a life event like bereavement or divorce, but it can also just land for seemingly no reason. I think it’s a universal experience, and it’s cyclical: We winter again and again across our lifetimes, for many different reasons. It’s unavoidable, and yet we tend to blame ourselves and think we’ve failed somehow. I don’t think we should ever shrink from acknowledging that it’s deeply painful, but we do gain in wisdom each time it happens, and find new reserves of compassion.

BTW: You weave a lot of your personal experiences in with your research. What was the process of writing the book like?

KM: Fairly chaotic! I never meant to write a memoir when I first planned Wintering. I’d just published a deeply personal book, and I didn’t feel I could go through that again. But as I was writing, so many things were happening in my life that spoke to the themes I was dealing with. The text wasn’t really working until I inserted that first chapter on my husband’s sudden illness, and then began to own up to my own health problems, too. I felt almost ashamed to do so — I wanted to finally be the expert and keep my distance! But then my son started struggling in school, and so I finished the book in cafés while he played, and at strange hours of the morning while he was asleep. I’m still now sure how I actually managed it.

BTW: Throughout your times of wintering, you return to reading as a comfort. Can you talk about your relationship with reading, in particular rereading childhood favorites?

KM: I rarely re-read adult books, but I take huge comfort in children’s books. Maybe it’s the familiarity, or maybe it’s the simple moral world they create, but I always feel that they’re absolutely what I need in times of crisis. I also think that children’s authors are in the business of showing us a wise route through life, and I need that now as much as I ever needed it as a child. They take me back to a moment when the world still felt newly-made and possible, before I became cynical. I’m currently itching to pick up The Children of Green Knowe again!

BTW: In addition to thinking about the active things people can do to get through their own periods of wintering, a good portion of this book discusses sleep, including a pre-industrial sleeping process in which the night was divided into a “first sleep” and a “morning” sleep. Can you talk more about why you included this?

KM: Our sleep often becomes disrupted in times of crisis: we can’t get to sleep, or we wake in the night, and spend all day feeling exhausted. While I was researching the book, I was thinking about what a natural winter sleep might look like, and I remembered reading about the first and second sleep years ago in A. Roger Ekirch’s At Day’s Close. I realized that our current attitude to sleep is a crisis in itself — we’re so busy trying to make sleep fit a very specific pattern that we’ve become anxious about it. I wanted to reimagine what sleep might look like before electric light, fitness apps, and even clocks. It would have been very different to today, and it would open up calm, contemplative space in the quietest hours of the night.

BTW: Another point of focus in this book were pagan ceremonies and festivals. What drew you to these events?

KM: As a starting point, I noticed how many festivals of light cluster in winter — it’s clear that we’ve long tried to find a way to break up the gloom. After I attended the Midwinter festivities at Stonehenge, I interviewed Philip Carr-Gomm, who at the time was the Chief Druid, to ask what attracted people to celebrating that moment. He convinced me that the festivals were (and are) a wise way of marking time through the year, helping us to get the measure of the most difficult moments in the calendar. We’ve let go of so many of them, which is why that time between January and April feels so endless. I’ve started to mark the pagan festivals in my own life, even if that just means lighting a fire in my backyard. It helps me to notice how time is passing — how I’m changing across the year, and how the natural world is changing around me. Ultimately, it’s a mindful process of tuning in to the progress of the seasons.

KM: Fairly random! Initially, I contacted everyone I could think of who had lived in a cold country, and asked them how they felt about winter. Then I did a lot of reading. I absolutely love camping out in the British Library to read into every corner of my topic. I also booked myself into wintery experiences, like visiting Iceland, attending the Santa Lucia service in London’s Swedish Church, and meeting hibernating dormice. I tried to live winter as much as I possibly could. But most of all, I started writing a reflective diary about my own feelings and experiences as soon I realized I was going through a personal winter.

BTW: You also wrote about helping your son through his own bout of wintering. As many around the world head into a long winter — both literally and figuratively — do you have any advice? How can we help each other?

KM: I think the most important thing we can do for each other as we winter is to learn to hold space for negative emotions. Our culture so often flinches away from admissions of sadness or hopelessness, and we try to hide behind a brand of fake positivity that I find frankly cruel. The time has come for us to acknowledge that life can be awful sometimes. We can’t skip wintering. Those darkest moments are where the true learning of winter happens, and they’re often where we can begin to imagine our next steps. We’re all going to need to dig deep to find our reserves of empathy and compassion, so that we can accept our loved ones’ winters, and listen to them. That can only start by finding compassion for ourselves.

KM: That life happens in cycles. We don’t tread a straight path from knowing nothing to being perfect. We meander between sunny seasons and freezing ones. This is not a failure. It’s a fundamental part of being human.