A Q&A With Mary Laura Philpott, Author of April’s #1 Indie Next List Pick

Booksellers from stores across the country have chosen I Miss You When I Blink: Essays, (Atria, April 2) by Mary Laura Philpott as their number-one pick for the April Indie Next List. 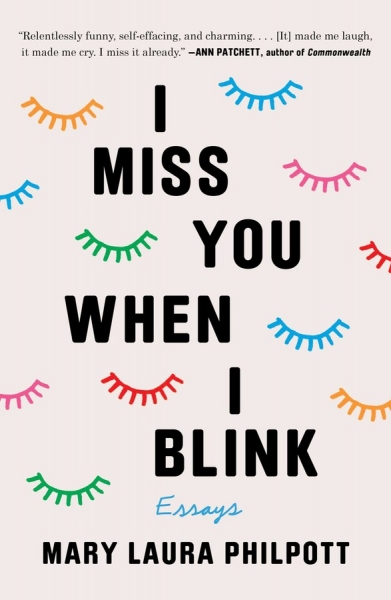 As she writes in this new memoir-in-essays, Philpott thought she had checked off all the boxes of traditional adulthood: a home, a career, a marriage, children. But in the midst of this ostensible success, she found herself awash in anxiety, plagued by the feeling that something was missing. Maybe, she thought, living a model life really doesn’t guarantee happiness. In I Miss You When I Blink, Philpott explores everything from the monotony of traffic and small talk, to having a penchant for perfectionism, to her life transition from copywriter in Atlanta to bookseller at Nashville’s Parnassus Books. By book’s end, Philpott has concluded that it’s never too late to start over, multiple times if necessary.

Nancy Simpson-Brice, co-founder and manager of Book Vault in Oskaloosa, Iowa, called I Miss You When I Blink a “marvelously frank and witty book of essays” about today’s American woman. “Women of all ages will nod their heads when reading about the decision to have babies (or not), the pitfalls of volunteering, the difficulty of getting a cat out from under the bed, the reward of crossing things off ‘the list,’ the challenge of finding time for relaxation, and, above all, the acceleration of time as we age,” said Simpson-Brice. “Philpott shares pivotal moments from her life in such a relatable way that, through both laughter and tears, readers will exclaim, ‘Yes, yes, this is ME!’ Don’t miss this gem!” 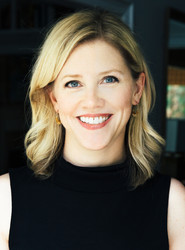 Philpott wrote and illustrated the humor book Penguins with People Problems (TarcherPerigree, 2015), and her writing has appeared in publications including the New York Times, The Paris Review, the Washington Post, and O, The Oprah Magazine, among others. The author, who lives in Nashville, Tennessee, with her family, is a bookseller at Parnassus Books and the founding editor of MUSING, the store’s digital magazine, as well as the Emmy-award winning co-host of A Word on Words, a literary interview show on Nashville Public Television.

In January, the writer and bookseller also served as moderator for the bookseller education session “Yes She Can — Programs and Partnerships to Empower Women“ at Winter Institute 14 in Albuquerque. “I think especially if you’re part of the bookselling world and you understand how hard booksellers work, [getting chosen for the Indie Next List] is particularly meaningful,” Philpott told Bookselling This Week. Here, BTW talks to Philpott about her upcoming book.

Bookselling This Week: Some of the essays in I Miss You When I Blink have been published in other publications, so what made you decide to put them all together in one memoir-in-essays?

Mary Laura Philpott: I had a little pile of published essays going at a certain point a few years ago, and people had said, “Aren’t you ever going to put them together?” And I thought, well, there’s nothing holding these together, there’s no thematic thread, they don’t really stick together. But over time as I wrote more, I started to see that there were some thematic threads, there were some commonalities among the essays, and I thought, OK, what if I wrote a few and didn’t send them out and just added to this pile to see what comes together. And these themes kind of started to bubble up, the themes of reinvention, and the more I would talk about what I was writing with friends they would go, oh my god, that’s what I’m going through, too! Write more about that so we have this as a book! So it was sort of a gradual awareness that there might be enough to put together as a book if I kept writing.

BTW: You made the point that many of the memoirs about reinvention currently out there are very dramatic, like Wild by Cheryl Strayed and Eat, Pray, Love by Elizabeth Gilbert, where the writer goes off on a grand journey to find him or herself. Do you think this kind of narrative is harmful or misleading for regular people? Or did you just feel like the world needed a book that was a little more down to earth?

MLP: I don’t think it’s harmful or misleading at all — I think it can be very inspiring and refreshing if you feel stuck in your life to read about somebody who made some really grand gesture or struck off on a huge journey. But I do think it’s worth having some other narratives because if that’s the only reinvention narrative you’ve had, it can make it seem so daunting to change everything in your life. So I thought, you know, I read those books and loved those books when I felt like I needed a change, but it would be wonderful for people to be able to read about things that can happen on a more manageable, smaller, ongoing scale.

BTW: Your book explores the nuances of identity and personal fulfillment as we experience them over time, including why nobody feels like they can share any dissatisfaction they may have about their choices in life. Why do you think we’re uncomfortable talking about such topics with others?

MLP: I hesitate to say that this is just a book for women, because it’s not, it’s a book for anybody, but I do think women in particular place a little more pressure on themselves to juggle a lot of things perfectly. I do think women sometimes face more of that pressure to do that than men do, and I think social media can make you feel like everybody’s got their stuff together but you. When you start to feel like you’re the one who’s the outlier, who is broken, it’s isolating, and once you start to feel sort of isolated and lonely, that can snowball. You start thinking, I’m the different one, something is wrong with me, and it gets harder and harder to talk about it with people.

In everyday life, it’s so much easier to talk about surface things, and those small talk conversations become like refrains; it’s a song where you can almost say the words without thinking. But I do find that the real conversations are the ones that happen on the periphery of other conversations, like after a dinner party, the friend who lingers afterward doing dishes who’s like, hey, I need to talk to you about something, or the friend who pulls you aside and says, have you ever felt like this? And I thought, wouldn’t it be wonderful if these conversations that happen along the periphery were brought into the light and were made the main conversation for a little bit? So that we could all know that nobody quite has it together perfectly and therefore we can talk about it? And at least if we don’t get our act together perfectly, we can know that nobody has it together perfectly and we’re not alone.

BTW: What do you hope people who read your book take away from it?

MLP: I hope two things: when people read the book and find that they relate to it — and not everyone will because not every book is for every person — I hope that, first off, it will allow them to exhale and feel like they’ve been seen, and alleviate some of the loneliness that comes along with feeling like you don’t fit in your life. So I hope that’s the first wave of feeling: relief and companionship in that phase of life. The next thing that I hope happens is that they will pass the book to their friends so that when people have these peripheral conversations and say, hey, I’m not super happy in my life and I don’t know what to do about it, they have a tool to hand each other and go, oh wait, you should read this, in much the same way that people have done with the memoirs and essays about the big blow-up-your-life reinventions.

BTW: What was it like writing this book while also working at Parnassus Books? And are you planning to hold your book launch there?

MLP: It was wonderful. A lot of people come through Nashville for book tours so we get a lot of really wonderful high-profile authors, so if you concentrate too much on that part of it, it can be a little daunting. You go, oh gosh, am I really going to try to put a book into the world while all these people are also putting books into the world? But being surrounded by readers and booksellers is a very safe-feeling environment for writing because you know there are people out there who are going to read it and you know there are people out there who are going to sell it and take care of it and help it get into the right hands. Whenever I did hit a point in the writing process where I felt like, ugh, I just cannot go on, this is too hard, it’s not coming together, it’s too difficult, I would remember those conversations with women who would come into the store and go, I need something. They would stand in front of the memoir section and go, where is the book that I need? And I’d be thinking, OK, maybe I’m writing the book that they need, so I’ve got to get back in my chair and keep going.

We’re having the book launch the night before it officially comes out; so it will be Monday, April 1. We’re having an April Fools’ night launch party at 6:30 p.m. at the store, and I’ll be in conversation with Ann Patchett. It’s going to be really fun.

BTW: You end the book with a message to readers that it’s never too late to start over. Can you personally imagine ever making such a big life transition again, like when you moved away from the life you’d established in Atlanta to a new life and career in Nashville?

MLP: Totally. Much like anything else that seems daunting, once you do it once it’s like, oh, that wasn’t that hard. Call a moving truck, call a realtor, you pick where you want to go, and you go, and if you don’t like it you can come back. Pretty much anything you do you can change your mind, or go back, or do it differently. So, yes, I can totally see doing it again. Which is not to say I’m ready to do it now or I’m done with Nashville and with this creative job I do and I want to go do something else, but I can see doing it easily. And it’s kind of fun to think about, like, oh, I wonder when my kids have left the nest if my husband and I would want to live somewhere else? I wonder if I would want to do a different job? It’s actually really a relief to know that that is a doable option.