A Q&A With Stephanie Land, Author of February’s Indie Next List Pick

Booksellers around the country have chosen Maid: Hard Work, Low Pay, and a Mother’s Will to Survive, the debut memoir by Stephanie Land (Hachette Books, January 22), as their number-one pick on the February Indie Next List. 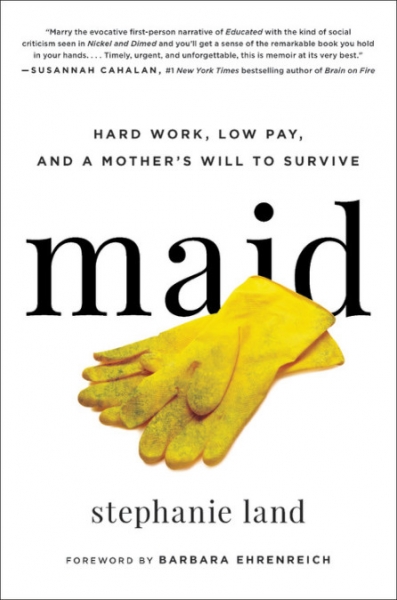 In the book, which features a foreword written by Nickel and Dimed author Barbara Ehrenreich, Land describes the journey that ensues when she turns to cleaning houses to make ends meet after an unplanned pregnancy at 28 disrupts her plans to go to college and become a writer. Land writes about living on food stamps and making use of government housing programs, all while being a single parent to her young daughter and taking online classes toward a college degree. Land’s memoir sheds light on the lives of the working poor and the stigma society has against those pursuing the American dream from below the poverty line.

“Stephanie Land’s Maid is a must-read of the highest order, a memoir of a single mother struggling to survive while performing the household labor that many of us take for granted,” said Emilie Sommer of East City Bookshop in Washington, D.C. “While at once deeply personal — you’ll fall hard for Stephanie and her daughter, Mia — it is also essential social commentary about how we treat the myriad domestic laborers who toil in our homes, oftentimes unseen and unappreciated. Read it alongside Nickel and Dimed or Evicted for a stunning, unforgettable look at American poverty and determination.”

Land’s work has been featured in the New York Times, the Washington Post, The Guardian, Vox, Salon, and many other publications. She focuses on social and economic justice as a writing fellow through both the Center for Community Change and the Economic Hardship Reporting Project, co-founded by Barbara Ehrenreich, and chronicled her struggles as a housecleaner, mother, and aspiring writer in her Stepville blog prior to writing Maid. She lives in Missoula, Montana, with her family.

Here, Bookselling This Week and Land discuss her journey from housecleaner to author and advocate.

Bookselling This Week: How did this book come to be? 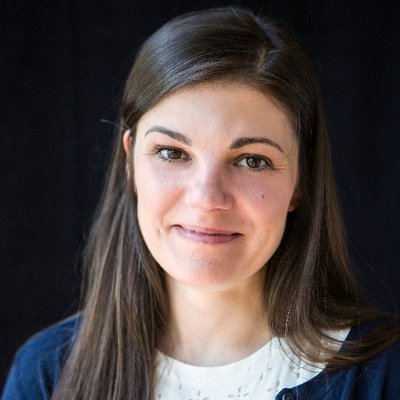 Stephanie Land: After graduating college I decided to get into freelance writing. I had no idea what I was doing, but I knew somehow that books were published when people had platforms to support them. My thought was, the more I get my name out there and in bigger and better places, the higher the chances I have of getting published. Then the housecleaning essay I wrote for Vox in July 2015 went incredibly viral, and an agent contacted me, and I was like, “Oh, ok, this is the story that people really want to read.” So that is how the book came to be.

Vox has posted the article a few times since then and each time I kind of brace myself for a lot of e-mails and comments, some of which are negative or hurtful; I upset a lot of people with that piece. Now I’ve learned to distance myself from it, but for a while it was really hard to deal with. I think by the time I was revising and editing this book, I was the most secure in writing about what had happened as far as being on food stamps and the social justice side of it. It’s a scary thing to admit to when you know what a lot of people think about it.

BTW: The format of your book includes your insights about the upper-middle-class owners of the houses you cleaned. Was it important for you to show what you learned about people?

SL: Yes, because so much of the job stuck with me and changed me fundamentally. I always thought that the big house on the hill was happiness, but I realized throughout those years of cleaning and also throughout the last 10 years that you can have a really small place and be perfectly happy; you don’t need a lot of fancy furniture.

I don’t know if I was ever the type of person to want fancy stuff, but commercialism tells you that all the shiny new things are the best ones and those are the ones you’re supposed to have, and if you don’t, then your value isn’t as much as the next person. As I was writing the book, I tried to not only point out how invisible I was to the homeowners, but how visible the homeowners were to me, just in cleaning up after them, and how I kind of learned that they were human beings, too. And that was all I really wanted for myself.

BTW: Was it hard to relive those years?

SL: There was a lot of stuff that was hard to write about, but I also found a lot of compassion for myself in writing my story. I wrote it from a much different place — I had the book advance to live off of, and I was in a privileged situation to be able to sit down and put all of my energy and focus into writing, which still blows my mind.

I wrote the first draft straight through without looking back. During the editing and revision process, going back and rereading things that I had written months before and hadn’t looked at since, I saw myself more as a character than as the previous self that I had always been so negative about. I’d still kind of felt like I had failed during those years. But when I went back, I was like, “Oh my god, that was so hard! I can’t believe I did that!” It was really great for me to not have that empty hole of my life where I just felt so awful about myself. It changed that and it gave me a lot more confidence today; I can hold my head a little bit higher, so there was that side of it, too.

BTW: Since the events of the book, do you feel like the stigma against the poor has increased or decreased?

SL: As someone who has been writing about living on food stamps on the Internet for the last three and a half years, I’ve noticed that people don’t default to the poor-shaming and the single-mom-shaming as much anymore, but I’m not sure if that’s because my bio has changed a lot, too, now that I’m the author of a book. I’ve noticed a little more compassion in the comments sections because today, things like a medical condition suddenly bankrupting you are happening more and more frequently, so people are more empathetic because they are realizing this could actually happen to them. There is still the myth that if you work hard and pull yourself up by the bootstraps then we’re all going to make it, but people are starting to see how impossible that is and that that myth needs to be completely shattered.

Also, there are things in place that make it easier for people to listen to my story — I’m white and educated and I’ve obviously come out on the other side as a “success story,” even though I hate that term. But I recognize that my book certainly does not represent every aspect of being poor, so I’m hoping that it will open the curtain and set the stage for more stories like mine to be out there, and I’m hoping people will be willing to listen to stories by people who are from more diverse and adverse circumstances.

BTW: Looking at the support system in place via U.S. government programs, what do you think is the most important substantive policy change that could be made to improve life for working parents?

SL: I think kids should all have health insurance for free; that should be a no-brainer. And I think daycare or at least pre-school should be a universally public aid program. If I could have known without a doubt that my kid would at least be taken care of, that would have been a huge stress relief. But instead it was constant paperwork; I was audited for childcare because I was self-employed. With free medical care and basic childcare, parents could go to work knowing their kid was safe and if anything happened that they could take them to the doctor. That would be an enormous amount of stress lifted. Out of everything, that might be something other people can get behind.

BTW: Your memoir does not end with a man swooping in like Prince Charming, a common narrative in certain “struggle-to-success” memoirs written by women. Was it intentional to have the story end with a triumphant scene of just you and your daughter?

SL: That was very intentional, and I said in every meeting with every publisher and editor: “This book will not end with a man coming in.” Because we need more stories like that, where the woman ends up ok and she doesn’t have a man to come in and keep her safe and warm and take care of her from that point on. The book really ended at more of a mental and emotional spot of hope. I was still a college student and still cleaning and still on food stamps, but it was a good spot to end; it caught me by surprise when I was writing it.

BTW: How did Barbara Ehrenreich come to write the foreword for Maid?

SL: By the time we were submitting the book out on proposal, I think I had written for the Economic Hardship Reporting Project three times before, so they were aware of me. I had just had a piece out in the New York Times op-ed section that Barbara helped edit a little bit, and in our e-mail correspondence I asked her to blurb the proposal, which she did and it was amazing. Then I was in D.C. at a Community Change meeting and I got to sit down and have lunch with her, and I asked her if she would write the foreword. And now we’re doing an event together at Politics and Prose on January 28, so I’ll get to see her again.

We’ve also talked on the phone a few times and she has been a very wise voice in my ear. It’s a hard subject to write about because there are so many stigmas surrounding it, but Barbara told me, “Don’t be afraid to be angry, and don’t be afraid to be funny.” She’s been wonderful throughout the last few years.