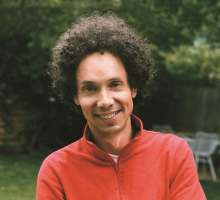 Malcolm Gladwell, author of the #1 bestsellers The Tipping Point, Blink, and Outliers, will share insights from his forthcoming book, David and Goliath (Little, Brown, October 2013), with booksellers at Winter Institute 8’s Sunday morning plenary session. During breakfast, at 9:00 a.m. on Sunday, Gladwell will discuss the complex and surprising ways in which the Davids of the world can successfully compete against the Goliaths, and how goals (often culturally determined) can make a huge difference in our ultimate sense of success. David and Goliath draws upon examples from the world of business, sports, culture, cutting-edge psychology, and an array of unforgettable characters around the world.

Gladwell has been a staff writer for The New Yorker magazine since 1996. What the Dog Saw (Back Bay Books) is a compilation of his New Yorker stories. In 2005, Gladwell was named one of Time magazine’s 100 Most Influential People.

Here, Gladwell talks about what drew him to the theme of David and Goliath and some of the opportunities for bookselling “Davids.”

BTW: In a 2009 New Yorker piece entitled “How David Beats Goliath,” you wrote about an unassuming basketball team of inexperienced 12-year-old girls who made it to the California state championship in large part by changing the way the game is typically played. What drew you to this story, and how much of your upcoming book is based on it?

Malcolm Gladwell: My new book picks up on the themes of that story. But the story itself is not part of my book. I like to keep the overlap between my New Yorker work and my books as small as possible. It was that piece, though, that got me thinking about all the strategies available to the weak. That story was about a group of relatively untalented girls who made it all the way to the national basketball championships by playing unconventionally: in fact, by playing basketball in a way that can be best described as obnoxious. They were 11-year-olds who played the full court press all game. That got me thinking. Underdogs don’t have to play by the rules, do they? And they don’t have to worry about pleasing others. That makes them pretty formidable opponents!

BTW: You have said that the biblical account implies that David beating Goliath was an anomaly, but statistically it is not. “Davids win all the time,” you have written. “When underdogs choose not to play by Goliath’s rules, they win.” Independent bookstores are often represented in the media as the “Davids” of bookselling. How do you think they fit into this theory — that size or strength can be overcome by strategy and unconventional techniques?

MG: What independent booksellers have, by virtue of their “weakness,” is the opportunity to offer a personal and intimate shopping and browsing experience. That is a great example of a weakness that isn’t really a weakness — especially in the age of Amazon. An impersonal mega-store is not qualitatively different from an online retailer. The neighborhood bookseller is.

BTW: In laying out a strategy to defeat a Goliath, where does one begin? Have you found there are one or two key elements to every successful plan?

MG: In my book I talk a lot about the blind spots that accompany power and advantage. For example, I have a section on the idea of the U-shaped curve. Strategies that work very well at a low level can have the opposite effect when applied with maximum force. Goliaths constantly make this mistake. I could go on. But I would be giving away the book!

BTW: In your 1999 piece “The Science of the Sleeper,” you talked a lot about Mary Gay Shipley of That Bookstore in Blytheville, Arkansas, and her ability to successfully hand-sell often little-known books that she was passionate about, and to successfully match book buyers with their next great read. Your piece also talked about the then nascent work in collaborative filtering technology, which tried to replicate what Mary Gay was doing in her store. Now, more than 13 years later, do you think a well-staffed bricks-and-mortar bookstore still offers a unique opportunity for discovering new titles?

MG: All I know is what I see in my weekly visits to the bookshop three blocks away from my house. I buy a book a week there, and I am almost never disappointed. The store is tiny. It can’t be more than 700 square feet. But that intimacy forces the proprietor to make real decisions about what to stock, and the result of those decisions is that I feel like I am getting a thoughtfully edited picture of what I ought to be reading. In a world overwhelmed by choice, that is a priceless gift.

The Morning Plenary With Malcolm Gladwell: David and Goliath will take place on Sunday, February 24, from 9:00 a.m. - 10:15 a.m. in the Westin Kansas City at Crowne Plaza’s Century Ballroom. All Wi8 badged attendees are invited.