To celebrate National Coming Out Day on October 11, The Quarto Group, a leading global publisher of illustrated books, is offering a free bookstore display kit that indie booksellers can use to set up a display for National Coming Out Day on Friday, October 11. The kit was inspired in part by Yay! You’re Gay! Now What?: A Gay Boy's Guide to Life by Riyadh Khalaf, illustrated by Melissa McFeeters (Frances Lincoln Children’s Books), 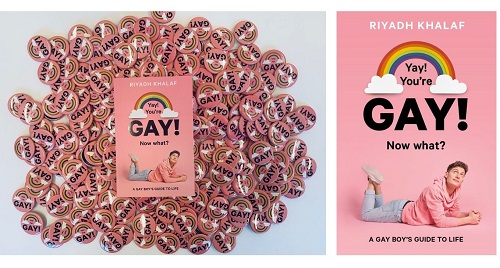 Quarto, which is based in London and has U.S. headquarters in Beverly, Massachusetts, is also making the “Coming Out” chapter of Yay! You’re Gay! Now What? available as a free download for everyone, whether they are thinking about coming out or have recently come out, or they are looking to be an ally to friends and family in the LGBTQ+ community.

“In an ideal world, LGBTQ+ people wouldn’t need to come out,” Khalaf writes in Yay! You’re Gay! Now What?. “Society would accept that everyone is different and that there is no such thing as 'normal,’ and your sexuality would be as interesting as your eye color.”

A link to the free “Coming Out” chapter from Yay! You’re Gay! Now What?, which came out in April 2019, is available here. As part of Quarto’s Equality for Every Reader campaign, the company is also offering a stock offer on all of its books that promote equality, which will last until the end of the year.

With the launch of Yay! You’re Gay! Now What?, Quarto aimed to do something that would help bookstores and organizations support those coming out in their communities, said Moushabeck. Booksellers can sign up for Quarto's complimentary National Coming Out Day display kit here while supplies last; the free kit features goodies and resources for booksellers and the organizations supporting the LGBTQ+ community. Kits will start being sent out next week, so booksellers should sign up by Tuesday, September 24, to receive theirs in time.

More than 100 bookstores and organizations from across the country have already signed up to receive a display kit, which includes:

Moushabeck, who formerly worked as a bookseller at The Odyssey Bookshop in South Hadley, Massachusetts, told BTW that Quarto, which is distributed by Hachette, created the new kit in order to celebrate “the time in a person’s life when they decide to come out. With National Coming Out Day around the corner, we wanted to make these resources available for free, not just for people who can buy the book, but to allow anyone to download the coming out chapter for free.”

“We’re also making fliers that will have a link on the rip tab that takes you to a landing page where you can download the coming out chapter, and it also links you to the Human Rights Campaign’s resources for coming out. We’re also putting in the link to Khalaf's YouTube video as well,” said Moushabeck.

“We just really want to encourage people to make the display so that they are supporting their communities and making those materials available to everyone," she added. “Since we launched the kit we’ve also heard from booksellers who are participating in pride events in their communities who have requested it for those events, too.”

Author, broadcaster, YouTuber, and LGBTQ+ advocate Riyadh Khalaf is best known for the BBC docuseries Queer Britain; his YouTube channel has amassed over 45 million views and has been featured on CNN, NBC, The Guardian, Huffington Post, BuzzFeed, and more. He is currently a host on BBC Radio 1’s Life Hacks and Unexpected Fluids shows.

Khalaf’s book includes stories from gay boys from around the world and exclusive content from gay men who share the advice they would give to their younger selves. In the book, Khalaf also shares his experience coming out to his Iraqi-born, Muslim father on YouTube; gives life and relationship advice; and offers emotional support to those suffering from bullying or unsupportive parents.

The free chapter from Khalaf's book is available here. Booksellers who would like to receive Quarto's complimentary National Coming Out Day display kit can sign up here. Quarto’s Equality for Every Reader stock offer can be found here.