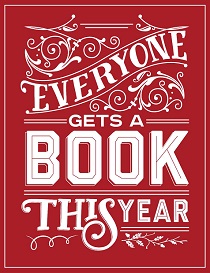 The Northern California Independent Booksellers Association (NCIBA) has launched an extended media campaign to help member booksellers introduce this year’s holiday catalog — and the titles inside — to more customers; this year’s cover image features the tag line “Everyone gets a book this year.”

According to NCIBA’s website, the campaign has the potential to create 400 percent greater outreach. From November 14 to December 24, the association will help participating stores get increased exposure for their business and for catalog titles through coordinated radio, television, print, and social media advertising and promotion, including pre-made posts for Instagram, Twitter, and Facebook.

In addition, Baker & Taylor is partnering with NCIBA to make a variety of pre-set store display materials available at special terms.

Executive Director Calvin Crosby said this new focus on the catalog, which was created with help from All Things Book founder Vicki DeArmon, has had stores doubling and tripling their previous year’s participation.

The decision to make a major push on the catalog this year, Crosby said, stems from “years of having utilized the catalog as a bookseller and seeing the catalog’s importance to generating sales…and seeing how much investment stores put into the program with buying decisions, display, and knowledge of the included titles.” Crosby said he has also heard from stores across the region who rely on it for their fourth-quarter plan and even into first-quarter sales.

“[The new campaign] has increased store enthusiasm and, with the social media aspect, given some quantifiables that are often asked for,” added Crosby. “The association also used a great deal of the [NCIBA fall trade show] to get stores up and running and/or enhancing their social media footprint [by offering stores] education sessions and private tutorials.” 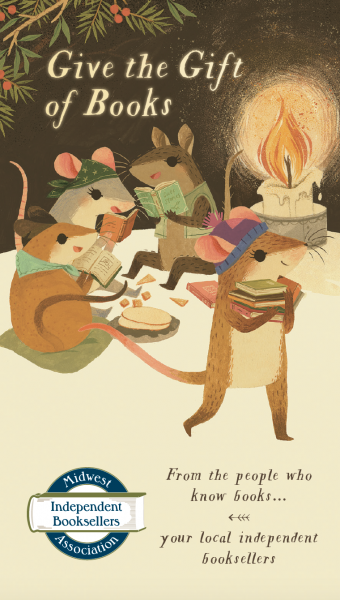 Stores are also working together to maximize catalog promotion, including NCIBA’s bookstore members in Carmel, which came together to split the costs for catalog imprinting and newspaper insertion.

“We as a region believe and are committed to the print catalog and fully appreciate the value of it as well as the increased profile it now has through newspapers, TV, radio, and, of course, the world of social media,” said Crosby.

In addition to its print catalog, the Great Lakes Independent Booksellers Association (GLIBA) is providing two versions of this year’s catalog online, including one that can be linked to booksellers’ point of sale system.

“We have the ability for stores to load the catalog onto their websites to allow customers to shop it online,” Executive Director Deb Leonard told Bookselling This Week. “We are also promoting titles on the GLIBA Facebook, Instagram, and Twitter pages starting next week and continuing until Christmas. We are also adding a display contest in which the winner gets $100.”

Andrea Vuleta, the executive director of the Southern California Independent Booksellers Association (SCIBA), said that her association was able to send out the catalog early this year, as well as increase insertions in booksellers’ local newspapers to more than 300,000.

“We offered a first-time advertising price this year, which seems to have been appealing. We also have the catalog on the front page of our website,” said Vuleta. “However, we are not a commerce site, so we also have a clean online version that stores can use on their sites, thanks to IndieCommerce.”

In addition, SCIBA also has social media scheduled for the holiday season with the hashtag #SCIBAWishBook, and it will be highlighting titles in the SCIBA newsletter.

For his part, Pacific Northwest Booksellers Association (PNBA) Executive Director Brian Juenemann said the association is up in store participation and total catalogs this year. This week, PNBA is going live with a mobile responsive IndieCommerce tie-in version of the catalog. In addition, PNBA’s online calendar also links to promotional suggestions for the holiday shopping season.

Midwest Independent Booksellers Association (MIBA) Executive Director Carrie Obry said the association hired a new designer who is skilled in creating interactive PDFs that act like magazines, so this year’s catalog is especially fun to browse. 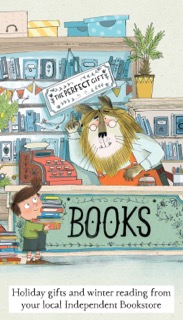 “The consumer can click through to see interior spreads, and it contains extra elements like author photos and moving design elements, like mice skating across the page,” said Obry. This is also the first year MIBA has worked with publisher art for the cover and interior of the catalog, which comes from Sterling Children’s Books’ Mice Skating by Annie Silvestro and illustrated by Teagan White.

MIBA is also incentivizing stores via cash rebates to offer to their customers via e-newsletters and banner ads MIBA creates. This year, MIBA is also dramatically subsidizing the direct mail by paying for the first 1,000 pieces of a bookstore’s saturation campaign.

To promote its holiday catalog, the New England Independent Booksellers Association (NEIBA) is asking booksellers to send in photos of their in-store holiday catalog displays, which need to include at least 25 titles and be up for at least two weeks between Thanksgiving and Christmas. Participating bookstores can earn two free tickets to NEIBA’s spring All About the Books event. The association is also giving member bookstores a 50 percent subsidy (up to $300) of the store’s distribution costs for media inserts or direct mail.

Kit Little, a staff member of the New Atlantic Independent Booksellers Association (NAIBA), said that like NEIBA, NAIBA is also offering stores a reward for sending in a photo of their in-store displays in the form of a $50 rebate. The association is also providing a PDF of the catalog, with customized links, to be placed on each store’s website this year.

“We also launched a special social media campaign which promotes each included book, the book’s author(s), the book’s publisher, and each of our region’s participating stores,” added Little.

Stores that are members of the Mountains and Plains Independent Booksellers Association (MPIBA) got their catalogs much earlier this year than usual, according to staff member Kathy Keel, who said the booksellers received them the week of October 16, right after the regional trade show. Currently, there are also around 350,000 catalogs being distributed in newspapers and other venues around the region, she said. 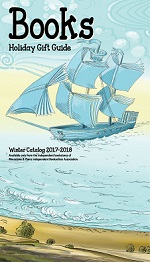 “We also devote our ‘Authors ’Round the South’ Facebook cover page and top post to the holiday catalog all of December, and we feature all of the titles in our weekly Lady Banks newsletter across December as well,” said SIBA Executive Director Wanda Jewell. “We provide any of our e-commerce stores who want one with an HTML version of the catalog for their websites, and we also provide shelftalkers and slit cards.”