Revolution Books Stands Up to the Alt-Right

For the past month, Revolution Books in Berkeley, California, has been attacked by alt-right activists via physical protests, negative reviews online, and harassing phone calls. However, the store is standing strong against efforts to intimidate its customers and staff. 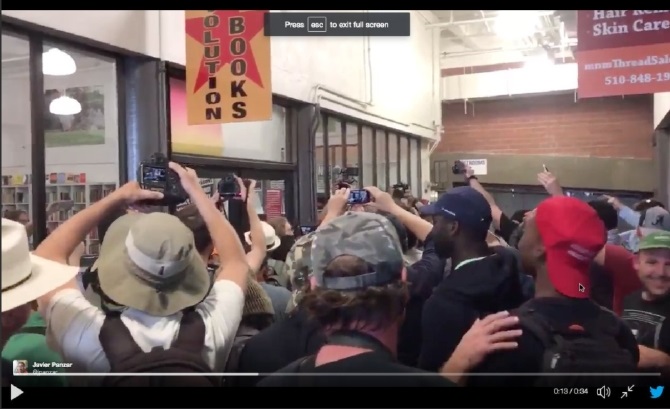 A screenshot from a video taken by an alt-right activist of the September 24 confrontation at Revolution Books.

A contingent of the alt-right was drawn to the nonprofit bookstore in late September, when conservative firebrand and former Breitbart blogger Milo Yiannopoulos visited Berkeley to kick off “

Free Speech Week,” an initiative organized by the Berkeley College Republicans that also brought in many police to patrol the area. Although the event was canceled, alt-right activists gathered to disrupt operations of the bookstore, which stocks books on communism, political movements including civil rights, feminism, and anti-war, and books on the history of white supremacy and the rise of fascism.

“In the past, the store has experienced things like graffiti, stickers, alt-right people coming in small groups to different programs that we have, but this most recent thing that happened was a whole escalation of that,” Revolution Books Manager Reiko Redmonde told Bookselling This Week. “On September 24, about 40 of them charged into a hallway in front of the store and basically yelled threats and banged on our windows and made a lot of noise before being shooed out. They came back later that day and twice the next day, and smaller numbers of them have come back since then.”

Those who attacked the store on September 24 included members of the Proud Boys, the Oathkeepers, and other right-wing activists, Redmonde said, as well as certain alt-right activists who had attended the Unite the Right rally in Charlottesville, Virginia. In a YouTube compilation created by a store supporter using videos recorded and posted by protest participants, one man is heard yelling, “We’re going into your bookstores; we’re going to confront you; we’re going to get in your f***in’ face! I’m sick of communism in this country, man!” The protestors were initially dispersed by police, but returned later, and neighbors and supporters of the store stood in front of the doorway in a show of nonviolence. 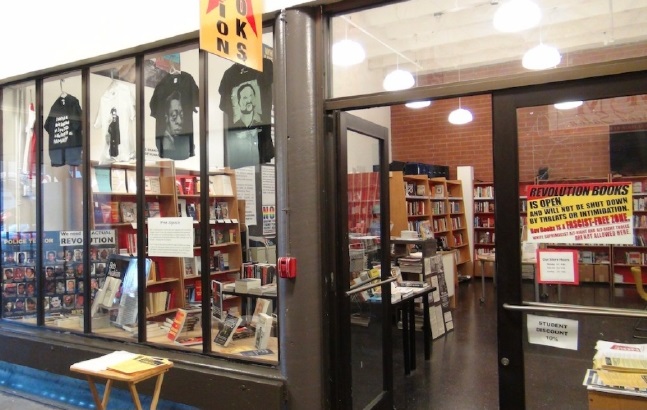 Revolution Books in Berkeley, California, has been subject to attacks, physical and otherwise, by the alt-right.

Over the past month, the store has also been spammed with negative Yelp and Google reviews and Facebook comments, and has received threats to dox, or publicly identify and release personal information about, Revolution booksellers. The store has also gotten numerous callers per day delivering insults like “commie scum” and death threats. The most recent physical incident occurred on Tuesday, October 17, when around 15 activists gathered outside and chanted after the store closed. Redmonde said she believes a lot of the virtual harassment is coming from people who may have never been to the store but learned about it on message boards such as 4chan, on which many from the alt-right post.

However, Redmonde said the response from the community in the face of these threats has been very positive; people continue to come to the store to engage with, read about, and discuss the events of the day, and many are interested in getting a deeper understanding of the history of white supremacy.

“Students have come to the store and specifically said they are coming in to buy a book to support us. One student brought vegan cookies he made for the staff. While I get the impression that some people might be intimidated, there is also this phenomenon of people coming in and saying, ‘I heard about what happened to you and I just wanted to come and show my support and concern,’” said Redmonde.

Revolution has also created a political broadsheet, which they display in the store, containing supportive quotes gathered from the community, including statements from authors such as Joyce Carol Oates, community figures like UC Berkeley professor of ethnic studies Ramon Grosfoguel, and other bookstores, including City Lights Books in San Francisco, which wrote, “All of us at City Lights Books were disturbed to hear of the recent attempts to intimidate and shut down Revolution Books for exercising their First Amendment rights. We stand with our fellow booksellers, and with all those who exercise their rights to think freely, publish and advocate for their beliefs. And we stand firm against those who would try to stifle dissent.”

The store, which employs volunteers rather than paid employees, has been encouraging people to patronize the store, promote it on social media, donate money to the store, e-mail statements of support, and participate in the Refuse Fascism rally, which is taking place in cities around the country on November 4.

At the Northern California Independent Booksellers Association Fall Discovery Show, Redmonde spoke up during the association’s annual meeting to implore other booksellers to pay attention to this issue, mobilize, and prepare.

“It was interesting because it was right after all of these [California wildfires] and there was a sense of wanting to have this normal get-together with authors and booksellers and food and wine, but we just thought, we have to bring this up,” Redmonde said. “We let people know about what’s going on, saying that this could happen to any of you and more of you should be active in speaking out. And people were really, really receptive.”

Update: Following publication of this article, the American Booksellers Association was contacted by a lawyer claiming to represent the Proud Boys. The lawyer disputes and denies the manager’s statement that members of the Proud Boys were present at the incident.