Riffraff, a Bookstore/Bar, to Open in Providence

Emma Ramadan and Tom Roberge plan to open Riffraff, a bookstore/bar, on the West Side of Providence, Rhode Island, later this year.

After they met working in the New York City book world, the couple realized they both had the same plan: to eventually open their own combination bookstore/bar. Now ready to move forward, Ramadan and Roberge are taking their inspiration from other bookstore/bars, including The Wild Detectives in Dallas; Trident Booksellers & Café in Boston; The Spotty Dog Books & Ale in Hudson, New York; and BookBar in Denver, whose owner, Nicole Sullivan, they met at last year’s Winter Institute.

Ramadan and Roberge have raised an estimated 75 percent of Riffraff’s startup costs through a combination of personal investments and outside support. To fund the rest of their venture, they decided to launch a community lending program similar to that of Greenlight Bookstore in Brooklyn, New York, whose owners created the program to fund both of their store locations.

Ramadan and Roberge have raised additional funds in the form of capital loans of a thousand dollars and up from members of the Providence community and beyond. The loans offered return rates between 2.5 percent and four percent, compounded annually; in exchange, all lenders will receive a 30 percent employee discount on books for the life of their loan. 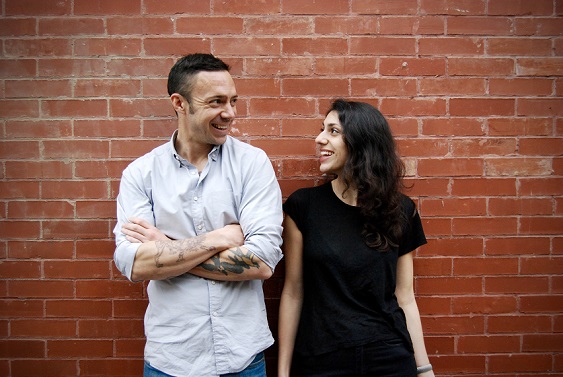 “It just seemed like a good way to get people in the local community involved and get them literally and figuratively invested in what we’re doing,” said Ramadan. “The response has been really good. I think we’ve had 12 couples or individuals in the community give us an investment. People within the community just seem really excited about the idea of contributing to a project in a way that is more concrete and personal than a Kickstarter campaign.”

Ramadan said she and Roberge have gotten to know and love Providence since selecting it as their bookstore/bar’s home. The store’s location at 215 Dean Street, a former factory featuring exposed brick, high ceilings with exposed wood, and exposed beams, is on the city’s West Side, an artsy area populated with bars, restaurants, and local indie businesses. The West Side is also home to artists, musicians, and writers, many of whom attended the area’s colleges, including Brown University, Rhode Island School of Design (RISD), and Johnson & Wales, said Ramadan.

“We picked Providence because there wasn’t a bookstore here already that was doing what we wanted to do,” she said. “We fit right in, and I think we’re filling a need that no one else is filling yet.”

Riffraff’s 1,500-square-foot space will be split evenly between bookstore and bar, with mobile shelves to make things easier for events and communal tables ideal for books clubs. The structure of the space will allow people to have the experience of both the bar and the bookstore, Ramadan said. The front of the store will be the bookstore and the back will be the bar, so families can come in with children and look through the kids’ books section and never actually set foot in the bar area.

“Riffraff is going to be the kind of place where if you just want to come in and browse for books without being bothered by people who are drinking, you don’t have to worry about that.” said Ramadan. “If you just want to come because you like our bar and you want to be surrounded by people who are browsing for books, that’s also possible. We are trying to make it both spaces, but integrated in ways that make sense.”

“There are a lot of places that are either bookstores with bars or bars that happen to have books, but it doesn’t really feel like you’re supposed to shop for them and we wanted to avoid that,” she added.

Riffraff’s stock will feature 5,000 literary fiction titles, a small children’s section, a poetry section, books by independent presses, books in translation, and a nonfiction section with books on current events, politics, sociology, and philosophy. However, Riffraff will not sell memoirs, cookbooks, self-help, or travel books.

The store’s 7,000 to 8,000 titles will represent a highly curated selection that reflects the owners’ varied interests and expertise. Roberge has worked in a variety of roles in the book world: bookseller at McNally Jackson; managing editor at A Public Space; editor at Penguin Books; publicist and bookstore liaison at New Directions; and deputy director at Albertine Books. Ramadan studied comparative literature at Brown University before completing a master’s degree in translation at the American University of Paris. She was a Fulbright Scholar in Morocco, where she worked translating a number of Moroccan writers from French into English.

According to Ramadan, the store’s name was inspired by a book that Roberge read about the 2008 economic collapse in Greece; in news reports, he learned, the media referred to the rioters as “riffraff,” in order to paint them as disreputable. Ramadan said the name “Riffraff” works well for the kind of enterprise they’re looking to create.

While the couple was hoping to open the store this spring, there have been some delays, Ramadan said, so the new target date is late summer or early fall.

“We’re not open yet, but the delay is worth it to us because this space is so perfect for what we had imagined,” she said. “We just keep telling each other it’s going to be worth it, that looking back this delay won’t have mattered, and what will have mattered is that we’re in a space that we really love and that we really feel connected to.”

Check out this video to see Roberge and Ramadan giving a tour of preliminary construction at Riffraff.