Residents of Roanoke, Virginia, will have to look no further for books when Book No Further opens its doors on October 27.

The independent bookstore will sell a mix of new and like-new fiction, nonfiction, and children’s books in a variety of genres, with a special focus on local authors and the history and sights of the region.

“There is not an independent store with new books within 50 miles,” owner Doloris Vest said. “It’s such a no-brainer. Why didn’t Roanoke have one? We wanted to do it now, because if we waited a year, someone would have beat us to the punch.” 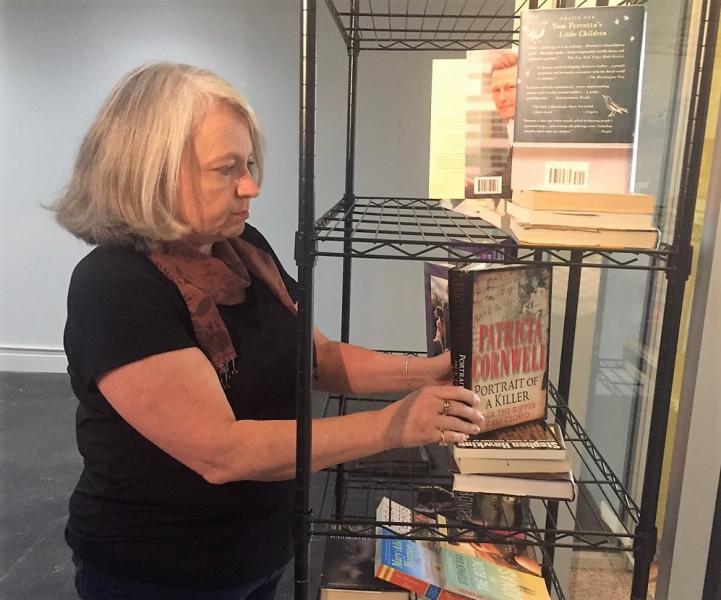 Doloris Vest is starting to accumulate books ahead of the opening of Book No Further next month.

Vest, who has spent the past dozen years as a nonprofit leader helping workers and small businesses thrive in the Roanoke region, told BTW she is excited about starting her own business.

She’s been researching independent bookselling for more than a year and was planning to open a store in spring 2018 until an art gallery vacated a space in a renovated historic building this summer. “The best spot had come open. The rent had fallen. So, we committed to that,” Vest said.

Dubbed 16 West, the building at 16 Church Avenue SW in downtown Roanoke has a mix of tenants, including apartments on the second and third floors, a gym, a vinyl record shop, and restaurants.

“What we liked about it is it has these little stores around the edges, and our store, at 575 square feet, is one of the largest ones,” Vest said. “There is a coffee shop right outside our door. We get the benefit of the coffee shop without running a coffee shop.”

An open space in the building hosts a variety of live events and will be ideal for author talks, perhaps with one of the restaurants providing refreshments, Vest said.

Sharon Ponce, owner of the Little Green Hive organic coffee and smoothie shop at 16 West, will be the bookstore’s closest neighbor. “I’m super stoked. I love books,” Ponce said. “When I saw a bookstore was coming, I was excited.”

All of the businesses in the center work well together, she said. “We all really vibe together. The building has done well picking tenants that complement each other,” Ponce said. “I’m looking forward to doing book parties.”

Serendipitously for Vest, a high-profile event is already in the works for December 11, and the theme just happens to be community gathering places.

Singer-songwriter Dar Williams will appear to promote her new book, What I Found in a Thousand Towns: A Traveling Musician’s Guide to Rebuilding America’s Communities One Coffee Shop, Dog Run, & Open-Mike Night at a Time (Basic Books).

Local author Beth Macy will also speak at the event. Her most recent book, Truevine (Little, Brown and Company), comes out in paperback the day Book No Further opens its doors; she’ll be on tour in Oregon that day, but expects to do something with Vest soon after.

“As an author, it’s great to have that presence. It’s great to go and meet your readers,” Macy said. “This is going to be a place where people are going to be free to linger and get to know each other.”

Macy has already given Book No Further a little boost by sharing a survey Vest posted online asking future customers for input on which books to carry. “My survey went from 30 to 40 people to about 300 in two days,” Vest said.

Vest credits her husband, Craig Coker, for first getting the word out on Facebook. “It whipped around this valley like you would not believe. It went viral,” Vest said. “A small note on my husband’s page not even intended as our ‘announcement’ ricocheted from his contacts to mine, including my very large family.” 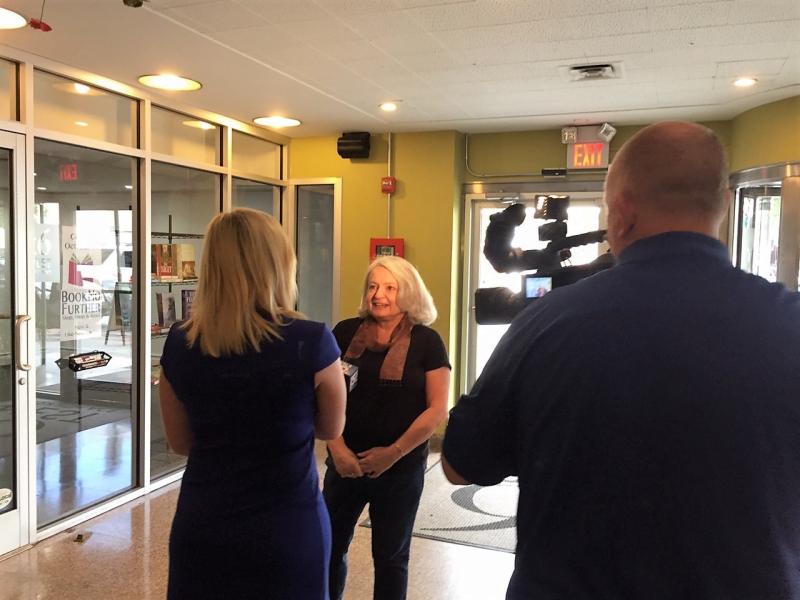 Local news came calling, and then came the local authors, including Macy and Martin Clark, a Stuart, Virginia, resident and author of The Many Aspects of Mobile Home Living (Knopf).

Martin, whose most recent book is The Jezebel Remedy: A Novel (Knopf), sent her a box of his books, including signed copies. He said he’s done the same for other new independent bookstores because he recalls how kind and helpful booksellers were when he was starting out as an author.

“These people opened their shops to me and gave me a chance and, in many cases, became my friends. Simply put, I have a writing career because of them,” Martin said. “I hope I can repay some of that help and kindness 17 years later, and, heck, from a selfish perspective, what could be better for me than having an independent store in Roanoke that might sell my books and mention my name to customers?”

Vest said her experience shows the value of investing time in social media and networking ahead of a store’s launch.

“Social media is especially good when you have more time than money to invest,” said Vest, who is updating the store’s Facebook page regularly.

Vest is well-versed in marketing. The 55-year-old began her career in journalism before moving on to public relations, corporate marketing, and two stints leading nonprofits.

She finished up a three-year term as head of the Botetourt County Chamber of Commerce earlier this year after nearly nine years leading the Western Virginia Workforce regional workforce investment board.

“I’ve been circling around small business and retailing for a number of years, so all this started coming together,” she said.

Her husband, an environmental engineer whose clients include small businesses starting up in the composting industry, shared his acumen in drafting the business plan. “He’s my business person behind the scenes,” she said.

The pair cooked up the store’s name with a visit to Google, where they searched for phrases with a literary bent. “We wanted something with ‘book’ in it,” Vest said.

They also did their homework on where to open. Vest said Roanoke, the largest city in Southwest Virginia and home to just under 100,000 people, is an ideal place for an independent bookshop. The surrounding metro area, which has triple the population, features several institutions of higher education, including Roanoke College in Salem, Hollins University in Roanoke County, and Virginia Tech in Montgomery County. Virginia Tech also has a presence in the city of Roanoke.

The region, with the scenic Blue Ridge Mountains outside town, has strong local pride, and Vest plans to stock a wide assortment of books written by Virginia authors as well as local histories.

She is also making plans for a grand opening event that will also tap into the history of the city as a railroad town that was home to the Norfolk & Western Railway for about 150 years.

Book No Further’s logo features the bright white and fuchsia colors of the store.

In the meantime, she’s finished painting the interior with a bright white with “flirty fuchsia” accents and putting in a new floor to cover the polished concrete that “echoed terribly.”

New bright lighting is also in the mix. “It was very muted. It was good for art, but not good for a bookshop,” Vest said.

The cozy size of the store dictated her choice of shelving. “We are using wire shelving to keep it light and airy. It’s a small room, so big wooden bookshelves would be claustrophobic. They are also more mobile if we want to do little events in our shop,” Vest said.

While she plans to hire some help over the holidays, Vest will be the sole employee when the store opens.

The experience won’t be a new one. “You’ve just talked to the entire staff,” Vest said with a laugh. “A lot of my marketing jobs have been jack-of-all-trades. At the chamber of commerce I ran, I was the sole worker. I’ve been lucky to work in spots where I’ve been able to do that.”

Vest said she was told by the 25 or so booksellers she’s visited up and down the East Coast not to stretch herself too thin.

“You can work yourself to death and you really need that downtime,” Vest said. “People have warned me to pace myself.”

Her most helpful mentor has been a high school friend who spent a career in the newspaper business before buying Family Book Shop in DeLand, Florida, three years ago. Kerry Johnson said Vest has what it takes to succeed as a bookseller. “The combination of being an avid reader, being smart, and having some sales skills is a one-two-three punch,” he said.

Johnson thinks Vest seems to be filling a need in the Roanoke area as well. “I give her kudos for her guts to go out and start it from scratch; we bought a place,” he said. “She’s starting very small, which is smart.”