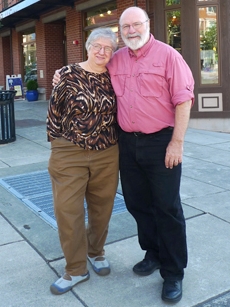 After more than 36 years at the helm, Chuck and Dee Robinson are selling Village Books and Paper Dreams in Bellingham and Lynden, Washington, to three employees of the company — Kelly Evert, Paul Hanson, and Sarah Hutton — effective January 1, 2017. Evert, Hanson, and Hutton have been part of the business’ management team and have overseen most day-to-day operations for the past several years.

Dee Robinson retired from daily involvement in the business two years ago, and for the past few years Chuck Robinson has worked more frequently from home and in the larger community. In announcing the sale via a press release and FAQ on Monday, November 21, the Robinsons said that both stores are doing well and the time is right to sell the business.

“There has been a net gain of independent bookstores in each of the last seven years,” Chuck Robinson said. “Our business is doing well in Fairhaven and we’re thrilled with the success of the Lynden store. And, most important, we have the right team in place to carry this business forward.”

In Evert, Hanson, and Hutton, Chuck Robinson said that he and Dee had not only found new owners who have the talent and skills to carry on the business but also the best team to carry on the values on which Village Books and Paper Dreams has been built. “We couldn’t have found a better team if we had scoured the entire country,” he said.

Kelly Evert has been with the store for five and a half years and previously worked in three other independent bookstores since 1989. In addition to her general management duties, she has been the business’ gift buyer and merchandise manager.

Of the opportunity to take over Village Books and Paper Dreams, Evert said, “We’re thrilled and humbled. This business has become an institution in this community and we’re so excited to be given the opportunity to carry on the legacy Dee and Chuck are leaving.”

Paul Hanson joined the staff at the same time as Evert as community outreach director and later became general manager. He came to Village Books after 15 years as the manager of Eagle Harbor Books on Bainbridge Island, Washington, and had previously worked in bookstores in Illinois and in the Seattle area.

“It doesn’t matter where you go in the country, people know [Village Books and Paper Dreams],” said Hanson. “We know we have a great responsibility to this community and to a wider community of booksellers. We’re honored to have been chosen to carry on the mission of this business.”

Following college, Sarah Hutton began her bookselling career as an inventory specialist for Borders. She came to Village Books and Paper Dreams 11 years ago and has been the store manager for more than seven years. Until recently she was also the children’s book buyer.

Reflecting on her time in the business, Hutton said, “I knew I was coming to work in a special place when I arrived more than a decade ago. I didn’t know then that I’d end up being an owner, but I’m so pleased and proud to take on that position.”

After the sale, Chuck Robinson will act as a consultant to the new owners over the next several years and will be available to direct special projects. He also plans to do some consulting work with other bookstores and retail businesses around the country. Both he and Dee will continue their involvement with the Chuckanut Radio Hour.

“We’re both in good health,” said Dee Robinson, “and we want to spend more time traveling, enjoying our home in Lynden, and reading the books we’ve stockpiled over the years. I’ve even begun to take up gardening.”

Noting that the business has thrived by constantly changing, Chuck Robinson said that he would encourage the new owners to do the same. “What won’t change is the commitment to this community, to books, to free expression, and to providing a great customer experience and personal service,” he said. “These folks have lived the core values of this business and will continue to uphold them.”

A combination reception for the new owners and farewell for Chuck and Dee will take place at the Fairhaven store in Bellingham on Saturday, February 4, and at the Lynden location on Sunday, February 5. The new owners are also planning a series of meet-and-greets in both Fairhaven and Lynden.