What do people on a comedy club stage, in an executive boardroom, and behind the counter of a bookstore all have in common? According to Second City Works CEO Tom Yorton, it’s the benefit they can acquire from developing improvisational skills. 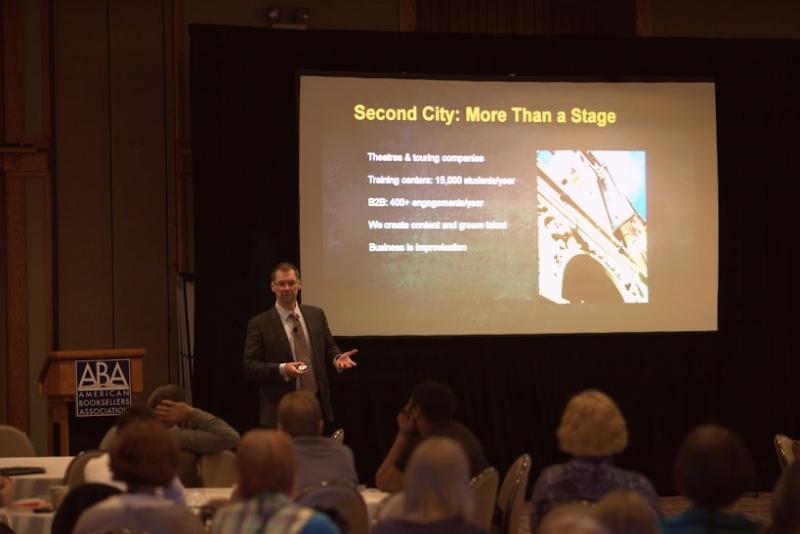 Yorton is co-author with Kelly Leonard, executive vice president of The Second City, of Yes, And: How Improvisation Reverses “No, But” Thinking and Improves Creativity and Collaboration: Lessons From The Second City (Harper Business), a new book which distills key tenets of improv and their practical applications for business.

Second City Works is the business arm of Chicago’s The Second City, one of the premier comedy theaters in the U.S. For 55 years, it has served as the training ground for legendary comedic talents such as John Belushi, Gilda Radner, Stephen Colbert, Tina Fey, and Steve Carrel.

At the Winter Institute 10 featured talk “Second City Works: How Improvisation Achieves ‘Yes, And’ Thinking and Improves Creativity and Collaboration,” Yorton and actors and Second City Works facilitators Meagan Flanigan and Mark Sutton gave booksellers a taste of the kind of instructor-led seminars Second City Works get paid to present to Fortune 500 corporations, nonprofits, and other organizations.

The goal of Second City Works, Yorton said, “is to help companies communicate, collaborate, and innovate better in a web-first, social-everything world” by providing practical tips, creative games, and fun exercises to take back to the office (or the bookstore) that will both improve staff effectiveness and make the workplace a little more fun.

“I always thought about business as an act of improvisation even before I came to Second City,” said Yorton, who previously worked in advertising and marketing at firms like Ogilvy Grey, with stints in upper management at Sears and 3COM.

“Mostly, for all the planning and controls and governance and things you put in place to keep bad stuff from happening, we all know what a day in the life is like,” he said. “You have to deal with uncertainties and curveballs all the time, and so that is the idea: that if business is an act of improvisation, it is a good idea to have this toolkit to deal with it effectively.”

With the help of Flanigan and Sutton, Yorton led booksellers at Wi10 through exercises from four chapters of the book that involved the audience in improv games, which are easily replicable with store staff.

Yes, And: How to Make Something Out of Nothing

“People are motivated sometimes by the need to be right, to control an agenda, to control the direction of something,” Yorton said, and, in the business world, this can lead to 12 people screaming at each other in a conference room as they struggle to arrive at a solution. Everyone wants to be right all the time, he said, and this mindset will inevitably lead to arguments, not resolutions.

“[You get] unproductive conversation that leads to frustration and not the kind of outcomes where you are creating from abundance, where you are building a lot of possibilities,” Yorton said.

This kind of uncoordinated chaos would be the death knell for any improv sketch, he said. Flanigan and Sutton demonstrated this “Yes, And” concept in a skit: booksellers were encouraged to shout out different scenarios that the actors were then forced to weave into an impromptu scene.

“When actors are onstage in front of an audience that expects them to be interesting and there is no script to drive the action, they have to find some way of working together to create something that is interesting and funny and compelling,” Yorton said.

This is just what trained improv professionals Flanigan and Sutton were able to do: They followed the simple rule that whatever one person initiates, whatever is offered, it is up to the other person to accept that, affirm that, and then build on it, said Yorton.

How to Build an Ensemble

Next, Yorton explained how the idea of “teamwork” has gotten a bad rap.

What improv comedy ensembles do is collaborate, not compete, he said. “This is how you get unlikely ideas,” said Yorton. Great individual performers like Steve Carrel and Steve Martin who went on to have legendary careers learned everything in the context of a comedy ensemble, he added.

“[In an ensemble,] it’s not a zero sum game,” Yorton said. “It’s not either an individual gets what he or she wants or the ensemble gets what they need. You can do both….We’ve proven that through great ensemble work you can lay the groundwork for individual [success].”

To demonstrate this, booksellers played the “statues game,” in which one participant poses and another taps them on the shoulder to take their place, then assumes a new position; the original participant then thanks them and leaves. As participants work together as one mind to advance the momentum of the group, rather than stepping forward or holding back for whatever their individual reasons might be, the game gains speed and statues are built more and more rapidly.

“This shows us how powerful the smallest action can be and what a difference you can make as a leader by just showing the slightest bit of support to someone,” Yorton said.

Listening Is a Muscle

For the most part, Yorton said, business communication doesn’t rise to the level of deep intentional listening that effectively absorbs what the other party is saying. Instead, listening becomes a rote action that feels obligatory, when really, dealing with clients and customers requires the ability to “listen to understand,” he said.

This is especially true in a retail environment where a bookseller needs to connect with a customer and solve problems. “You have to demonstrate a willingness to really care about what they want and demonstrate that through active intentional listening to be able to have that kind of customer focus,” Yorton said.

To demonstrate this concept, booksellers paired up for a two-way conversation, in which each participant had to be ready to begin his or her statement with the last word in the other person’s previous statement.

Following the exercise, booksellers told Yorton that by simply focusing on the other person and turning off their internal automatic response generators, they found themselves becoming more spontaneous and were much less likely to stop listening in the middle of the other person’s sentence.

These days, leadership has become more of a collaborative model, Yorton said, and those in the business world have to realize that.

“We have this idea of the ‘I’m in charge’ person out front, this kind of hierarchy,” he said. “This is really that command- and-control model that we lived with during the last century, and it worked for a time, but the world has changed and people have changed…That is just not the way to do it anymore.”

Booksellers experienced the “follow the follower” concept by way of a group exercise in which each participant was only allowed to contribute one word at a time to build a story. The important idea here is “what does the ensemble want to do and how can I support that,” Yorton said, to “bring a brick, not a cathedral.”

This model, which is not really top down, Yorton said, is a great way to develop staff, “because it gives new people a chance to take the fore and gives the younger generation a chance to really steer things and have a turn at the wheel. If we play that right and don’t get threatened by that, it is a beautiful thing for everybody. More people can contribute better and more often.”