Sign Up Now to Play Quidditch at 2019 Children’s Institute 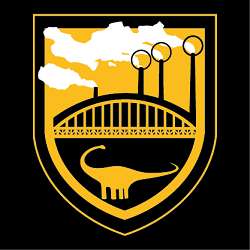 Members of Pittsburgh's Steel City Quidditch Club (logo shown here) will instruct and compete with booksellers in a game at Children's Institute.

In addition to providing some healthy competition, Steel City players will also be coaching booksellers in quidditch basics. Cynthia Holden, a member of the Steel City Quidditch Club and a former member of her undergraduate team, said she joined to stay physically active and to meet people when she moved to Pittsburgh. “I’m glad I kept up with it,” she said, “because I’m still meeting incredible people in Pittsburgh as a result, and we have a lot of fun as we practice and play.”

Holden shared that while the sport may have originally become popular because of the novelty of its origin in the Harry Potter books and movies, “it’s stayed popular because it’s a sport that is driven by its members,” in addition to being fully gender-inclusive at its highest levels. Quidditch can be played for fun or competitively, she said.

In terms of training new members, Holden said the team generally covers the basic rules, then gets players into a scrimmage. “Quidditch has a lot of rules and many of them sound complicated, but are much easier to explain while actually playing,” she said. “We also work a lot on good throwing and catching, on goal-scoring, and dodging bludgers (dodgeballs).”

Children’s Institute attendees will be taught the “middle school rules,” which means no full-body contact. The game will be played in the air-conditioned Sports Dome Meeting Room at the DoubleTree Hotel by Hilton Hotel Pittsburgh–Green Tree, the site of this year’s Institute.

Booksellers who are interested in learning how to play quidditch and competing in a scrimmage will need to sign up ahead of Children’s Institute and bring clothing and shoes to play. There is a minimum of 30 players required for the game to take place, and a maximum of 40; all other booksellers are invited to cheer from the sidelines. The match will take place on Wednesday, June 26, at 10:30 a.m. Booksellers can register here to play.

Children’s Institute, which is open to booksellers at all ABA member stores, will be held June 26–28 at the DoubleTree by Hilton Hotel Pittsburgh–Green Tree. The Ci7 conference fee is $129 per bookseller. Space is limited, and there is a maximum of five registrants per ABA member business. The institute is made possible by the support of lead sponsor Baker & Taylor with additional support from publisher sponsors large and small.