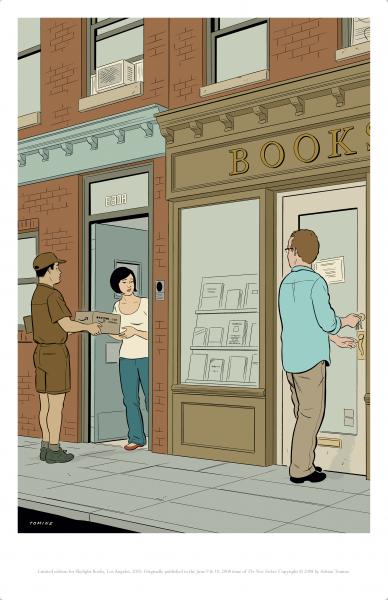 Los Angeles’ Skylight Books, which has created various innovative marketing campaigns, recently developed a new raffle series called “Fine Prints.” During October, every customer who spent $40 or more was eligible to enter a fine print raffle. At the end of the month, 10 customers won an original Adrian Tomine print.

“We look at this as a unique opportunity to reward customers with a little extra something that they can't receive anywhere else,” said Kevin Awakuni of Skylight. “We are also hoping to make this a regular giveaway that we will hold every couple of months and hope to have more A-list artists lined up for our next series of prints.”

Skylight Books held the raffle on October 30, during its 14th anniversary party. “The winners were a mixture of repeat customers and newer customers who have only been to our store a handful of times. All of them were extremely happy to have won,” Awakuni said. “And if memory serves me correctly, all of them also made purchases when they came in to pick up their prints, so it was another way to help boost sales.”

About 70 percent of customers who shopped at Skylight during the month were unaware of the raffle when they came into the store, despite Facebook, Twitter, and other marketing efforts, said Awakuni. “But once they saw the print itself and how they could win it, a lot of them would buy around $40 worth of goods and receive their raffle ticket.”

The other 30 percent came specifically to try to win a print. “We gave out over 450 raffle tickets during the month and are really hoping to build upon the success that we got from this initial giveaway.”

The Tomine prints were made especially for the store and each was signed and numbered. The image was most recently seen on the cover of the New Yorker magazine in the summer of 2008. “They are printed on archival paper, are 11" x 17" and look absolutely gorgeous,” said Awakuni.

Skylight was able to obtain the prints after Awakuni contacted several different artists and graphic designers. Tomine, who had done several readings at Skylight, was one of the first to respond and donate an image. The store is currently working with another artist for a future raffle.

The artist was “absolutely wonderful to work with,” said Awakuni. “Very patient and generous with his time, and obviously none of this would've been possible without him. He was very happy with how the whole thing turned out. As he told me in an email, while he doesn't have a lot of pet causes, he is a big believer in supporting independent bookstores.”