What booksellers were hoping would be a lucrative three-day weekend was totally disrupted by Hurricane Matthew, which tore into the southeastern coast of the U.S. and caused damage to homes and businesses and left thousands of people without power. On Tuesday, October 11, however, several booksellers were back in their stores and relieved to have escaped major damage. 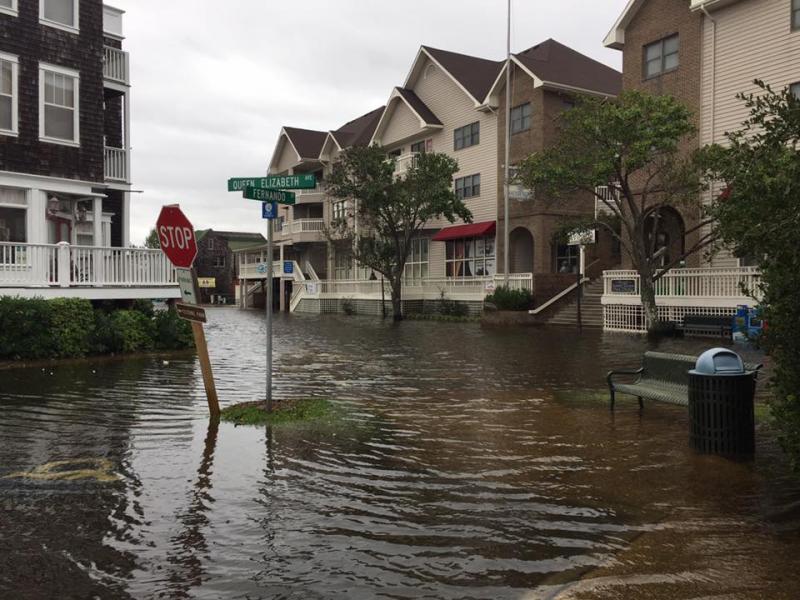 Southern Independent Booksellers Alliance (SIBA) Executive Director Wanda Jewell, who was monitoring social media on Tuesday to see how area booksellers fared, reported that she hadn’t heard from any booksellers in distress. But, she added, everyone on the coast had been evacuated, so many still might not have power to tweet, call, text, or post on Facebook. “It doesn’t look like there was any longstanding damage,” said Jewell. “So far it looks like folks did okay.”

On Tuesday, Bookselling This Week was able to reach a few booksellers who had returned to their stores, which had come through the storm relatively unscathed.

E. Shaver, Bookseller in Savannah, Georgia, closed its doors Thursday, October 6, in response to mass evacuations in the area and “just because we had so much prep to do,” said owner Jessica Osborne. “We’re a bookshop of windows so we had to put sandbags down and take everything out of our windows, then bag up the computers and back up all our information.”

E. Shaver received a little help from its friends during the storm: All night long the bookstore’s upstairs neighbors emptied buckets that staff had placed to catch any leaks and even welcomed the store cats to camp out in their apartment on higher ground.

“There is a lot of damage in Savannah. We’ve been clearing the sidewalks of tree branches and debris and cleaning up in front of the store just so people can get to us,” said Osborne. “But we feel very fortunate. We have business interruption insurance so that will cover part of the costs, since we had scheduled a book signing with Jonathan Rabb and had to reschedule all of our other events starting Thursday.”

The BookMark in Neptune Beach, Florida, is located on the outskirts of Jacksonville, a city hit especially hard by Matthew. Owner Rona Brinlee said her store was well protected from the storm’s harsh winds and heavy rains due to her building’s 12 inch-thick concrete walls and hurricane-proof windows, which block winds up to 150 miles per hour. 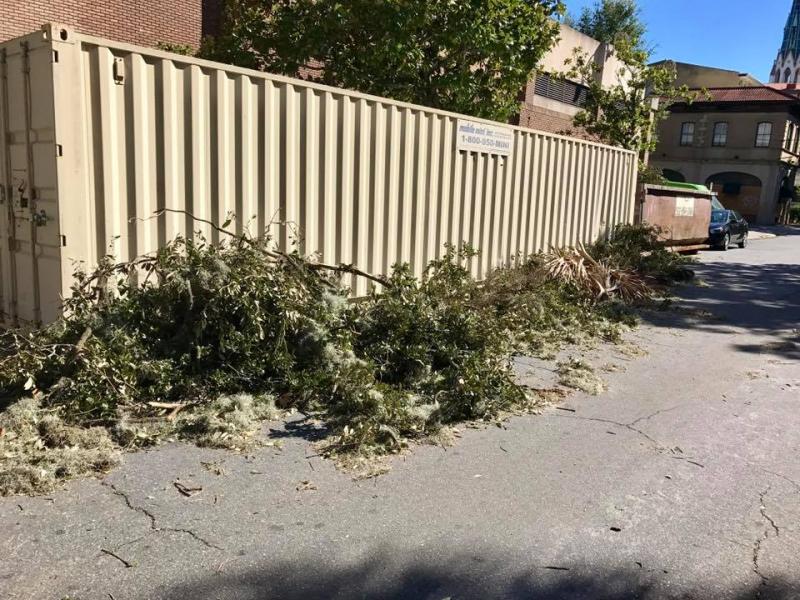 In Savannah, Georgia, the location of E. Shaver, Bookseller, tree branches and plant debris were piled up on the streets.

“This is a great building and we’re very fortunate. The water just lapped the curb; we’ve never flooded before,” said Brinlee, who said she made sure to sandbag the building, unplug computers, and move all of the books off the bottom shelf before evacuating with her husband to a hotel 20 miles away,

“Now that we know we’re safe and fine, there is a real sweetness and sense of community. People have been so lovely,” said Brinlee. Not only has she heard from family and friends calling, texting, and posting on social media to check if she and the store were alright, but BookMark’s customers, old employees, publishers, and sales reps have also reached out. “It was beyond sweet in a terrible situation, which turned out not to be too terrible.”

Jonathan Sanchez, owner of Blue Bicycle Books in Charleston, South Carolina, said his store was ready to face Matthew’s fury by the time the storm had reached the area and he and his staff had evacuated.

“Blue Bicycle Books has been here a long time, since 1995, and we’ve been through a lot of storms so we kind of know the drill. For our stretch on King Street, the storm surge wasn’t an issue, just the rain. We just had a little bit of water come in, but that’s Charleston for you.”

Sanchez acknowledged that Blue Bicycle’s sales did lose momentum due to the Columbus Day weekend closure: “The biggest problem in terms of evacuation was that it was a ghost town over the three-day weekend, which is usually a big one for the tourist economy,” he said. 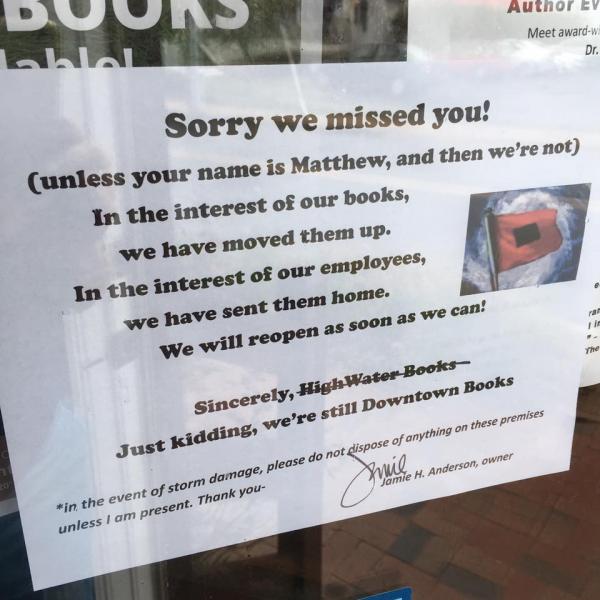 North Carolina was one of the hardest hit states, especially the narrow peninsulas and barrier islands of the Outer Banks, where travel restrictions for non-residents were only lifted as of Tuesday, excluding Hatteras Island.

“I lived here for 13 years and this was the worst storm we’ve ever had. I thought the roof of my house was going to blow off. Although my store is right on the water, we didn’t have any flooding,” said Susan Hinkle, who owns Page After Page Bookstore in Elizabeth City, North Carolina, about 50 miles inland from the Outer Banks. “But I did hear you can’t even get down to Duck or Manteo [in the Outer Banks] right now unless you are a resident.”

Jamie Anderson, who owns two stores in the Outer Banks, Duck’s Cottage in Duck and sister store Downtown Books in Manteo, said the Downtown store had about six inches of water inside, while Duck’s Cottage, which is on relatively high ground and near a drainage pond, was spared any flooding.

“At Downtown, we didn’t have any damage to books, although we did lose a box of advance reading copies. We had moved all the books to the top shelves. We had taken our greeting cards out and emptied all the tables and moved everything up as high as we could, so then yesterday all we had to do was put the books back,” said Anderson. “Our landlord came in Sunday afternoon and opened the door to let the water out and did some wet-vaccing. When I came in yesterday everything was dry, so now we just have to attack it with mops and sprayers and a bleach solution.”

The stormy weekend did result in losses for Anderson’s store, which hurt all the more since she still hasn’t recouped lost business from the Saturday of Labor Day weekend, when her store was also forced to close due to Tropical Storm Hermine.

“I would say I lost about $4,000 in sales at the Duck store this weekend and about $3,000 in sales at the Manteo store,” said Anderson, who is hoping make up some of the business she lost when author Alan Gratz visits her stores and tours local schools for three and a half days during the week of October 24.

Booksellers who have suffered business or personal financial crises because of Matthew are reminded to contact the Book Industry Charitable Foundation (Binc), which stands ready to help bookstore employees in need.