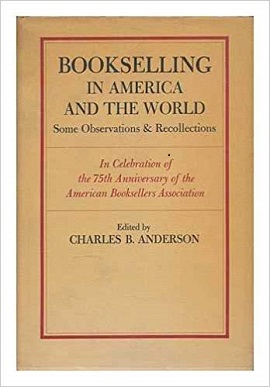 This excerpt discusses ABA’s operations during the Depression and World War II, among other topics. It also discusses issues of pricing policies and agreements made between publishers and booksellers during the early years of the ABA, which are currently illegal under legislation such as the Sherman Antitrust Act and the Robinson-Patman Act.

Few remember it now, but for three consecutive years, 1929–1931, the ABA held two conventions: one on the West Coast, one in the East. They apparently were intended to be equal in status — but one of the two had to be the locus of formal business, and that was the Eastern meeting.

For the 1929 Western meeting, held in San Francisco, a strong team travelled from the East: Ellis Meyers and Marion Humble for the associations; Alfred Harcourt, J.W. Lippincott, and, with an inspirational message, Frederic G. Melcher, who said: “Great literature deserves great audiences, and if it is to reach the great audience of the Pacific slope adequately, there must be good marketing, too.”

The 1929 Boston convention also set another landmark: it authorized the Board of Trade to meet with a publishers’ committee “to arrange for an intensive research into the Book Business in all its details,” the various book trade groups to share the costs. The formalized the ABA’s participation in the famous “Economic Survey of the Book Industry 1930–1931: Final Report by O.H. Cheney, Director,” issued in 1931 by NAPB (rev. ed., Bowker, 1949) and still valid in some of its observations about the disorderly nature of the book business.

Booksellers in the Depression

The Depression was now well on its misery-making way. Still the ABA was keeping up its services, even adding a monthly mailing piece for booksellers to distribute. In 1932 the ABA set up some 15 regional conferences to analyze “the merchandising principles” embodied in a considerable number of recommendations in the Cheney Report. Convention interest turned sharply toward budgets, cost control, and renewed opposition to loss leader selling. There was a lot of action, but the ABA had not only lost money on its Bookselection scheme; it was soon losing dues income as well. Ellis Meyers resigned in early 1933. His eight years of persistent initiative had been full of accomplishment, and he was missed. However, the basic ABA services were carried on by Robert M. Coles and another staff member, David T. Sachs. It was Bob Coles who then saw the ABA through the years of the National Recovery Administration (1933–1935) and into the war period.

The NRA was for the most part enthusiastically supported by the book trade. Booksellers, led by a group dubbed “The Three Musketeers,” (Richard Fuller of the Old Corner, Boston; Frank Magel of the Putnam Bookstore, New York; and Cedric Crowell of the Double Day Book Shops) lobbied for the inclusion of list price maintenance, during some period in the life of a books, and other protective devices in the NRA Booksellers’ Code. The ABA leaders sold the NRA officials on the idea that such a code was needed for the survival of effective national bookstore service. Therefore a Supreme Court ruling against NRA — coming as it did during ABA’s 1935 meeting — was a shocker to the booksellers. PW’s headline, “Supreme Court Ruling Stuns Convention,” was no exaggeration.

Nevertheless, the book trade was now able to fall back upon a growing number of new state laws permitting producers (including publishers) of “labelled” competing products to write contracts with sellers requiring maintenance of minimum marked prices in the states having such laws. The federal Miller-Tydings Act made these contacts valid across state lines. The ABA vigorously backed this system — of which more, further on.

Essentially, however, the book trade was on its own; and the ABA continued to foster sales promotion activities. In 1936 the organization launched — at the suggestion of Virginia Kirkus — a plan called the National Book Award. It lasted until World War II, and unlike its later namesake, it was a set of awards bestowed by a vote of all interested booksellers. Titles were selected as the “Booksellers’ Favorite Novel,” and nonfiction, and “Booksellers’ Find” and “Discovery.”

Association membership dipped during the Depression to much less than that of the ABA’s first three or four years. As the Depression receded, membership began to recover: 507 member firms in all in 1937, 665 by 1941. ABA services were sustained and increased; an Order Blank Distribution Service (daily consolidation of orders mailed directly to ABA and hand-delivered to publishers) began in 1938; and in the same year, a Book Token plan, based on the successful British model, was adopted — later succeeded by the ABA Give-A-Book Certificate plan. Also in 1938, the ABA began its long-lived New York Books and Author Luncheons. Promotion forums and special-interest round table group meetings marked the conventions of the period. The eventful 1938 sessions were remembered also for a trip up the Hudson to Sing Sing Prison in connection with a book by Warden Lewis E. Laws. Exactly 201 came out, PW reported with an air of relief.

The ABA in World War II

As World War II began in Europe, some of the great issues involved, particularly that of cultural freedom, were presented to ABA audiences by distinguished writers — Thomas Mann, refugee from Nazism; Carl Carmer, Sholem Asch, Drew Pearson, Carl Sandburg, and others.

After December 7, 1941, the ABA again took its part in the national war effort. Karl Placht, president of ABA, telegraphed to President Roosevelt a full pledge of booksellers’ cooperation. The ABA backed the Victory Book Campaign to collect 10 million books for the armed forces. Buy good books, the ABA urged the public; and when they are read, give them to the campaign, through library and bookstore collection points.

A committee under George Hecht of Doubleday stores listed methods of conserving materials and reducing waste. Special issue-oriented booklists were drawn up. Speakers from Washington agencies explained new rules regarding materials. ABA was represented on the Council on Books in Wartime, which among other activities provided a flow of quality reading on many subjects, in pocket reprints, for the armed forces — almost 1,200 titles and more than 123,000 copies. Archibald MacLeish urged the 1942 convention to start thinking of how books could help deal with postwar questions.

Meanwhile, book clerk training programs went on, and legislative questions, including the periodic problem of maintaining book post rates, were dealt with. An inspiring moment was provided by President Roosevelt’s message to the 1942 convention, affirming the essentiality of books and making them “weapons for man’s freedom.”

The project 1943 convention was replaced by a New York business meeting and dinner (with a delegation of British publishers as guests); and a “convention in print” was held in the pages of PW. There were regional reports from members, reports on rationing and other wartime restrictions, and a demand that publishers give preference to established book outlets over short-term competitors who move book simply because their regular lines were in short supply. In 1944 a one-day convention took place. Honor was paid to Harcourt, Brace; Little, Brown; Morrow; and Norton for their consistently high standards of “business ethics in book distribution” — measured by their policies as to advertising, book club practices, efficiency, minimum discounts price maintenance, fair practice in remaindering and reprinting; avoiding competition with booksellers, and not encouraging “new, unnatural accounts.” The 1945 “convention” was held again “in print” and by mail; it consisted of replied to an extensive questionnaire on all the booksellers’ problems. Results were reported by Harriet Anderson of the Channel Bookshop, New York, who from 1944 to mid-1946 carried on a wartime ABA Selection in PW, replacing ABA’s own Bulletin.

While Bob Coles was in the armed forces, his capable wife, the former Harriet Seligman, a member of the ABA staff, carried in his stead. Mr. Coles, after his return, went to work for the Book-of-the-Month Club. Gilbert E. Goodkind, a young attorney who had worked with the New York City agency and later with the U.N. Relief and Rehabilitation Administration, was hired as executive secretary early in 1956.

Below is a letter written to the American Booksellers Association from former president Franklin D. Roosevelt to supplement “The ABA in World War II” section of this excerpt.

To the American Booksellers Association:

I should have liked to be with you in person to extend my greetings and talk to you, for I have been a reader and buyer and borrower and collector of books all my life. It is more important that your work should go on now than it has ever been at any other time in our history: in a very literal sense you carry upon your bookshelves the light that guides civilization. I need not labor the contrast between the estate of books in the free democracies and the estate of books in the countries now brutalized by our foes.