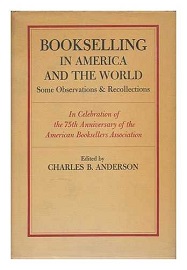 This excerpt discusses ABA’s operations during the 1950s and 1960s. It also discusses issues of pricing policies and agreements made between publishers and booksellers during the early years of ABA, which are currently illegal under legislation such as the Sherman Antitrust Act and the Robinson-Patman Act.

Disputes over pricing practices and club policy did not keep the book trade from uniting in 1950 in a warm observance of the ABA’s first half-century. The jubilee convention was held at the Hotel Astor in New York City, and there was no trade exhibit, its place being taken by publishers’ ads in the anniversary book. The convention focused more on the future than on the past. John O’Connor of Grosset & Dunlap told the assembled book people that a potential “vast expansion” of their market lay ahead, and explained the plan by the American Book Publishers Council to launch in 1951 a Committee on Reading Development to promote increased readership of books. Mr. O’Connor’s news was welcome, especially since the ABA’s first — admittedly limited — cost ratio survey, released at the convention, suggested that annual average bookstore profits ranged under two percent.

The jubilee convention included another brand-new subject, the ABA’s first panel consideration of books and television. Speakers felt that while TV was yet another claimant for readers’ time, it also offered new opportunities for promoting books and authors. A show of hands revealed that most booksellers present did not as yet have a TV in their homes. A little later in the year the ABA made a survey of its members regarding the effects of television on their stores. They found that the experience of members “in television areas” of the then as yet unsaturated country compared with the experience of members in “non-television areas” showed that “the book trade’s fear of television is unjustified” and the effect of TV on book sales was “absolutely nil.” Today, of course, television is recognized as being, in many cases, a strong stimulus for books sales.

The anniversary celebration was a pleasant break, but meanwhile the ABA was becoming increasingly angry about the book clubs’ promotion of the top-of-the-list books at cut-rate prices. Booksellers were able to cite specific instances of sales and customers lost to the clubs. ABA leaders asked why the booksellers should not be able to offer top titles to their customers at prices like those of the clubs.

Accordingly, in February 1948, the association announced that it was asking publishers to lease to ABA the plates of certain books for reprinting and for sale at reduced prices. The publishers and books were: Houghton Mifflin, Churchill’s Memoirs; Harper, Betty Smith’s Tomorrow Will Be Better; Doubleday, Eisenhower’s Crusade in Europe. The publishers said “No.” Soon, all three books became major book club selections.

The ABA therefore complained to the Federal Trade Commission that the publishers were discriminating against booksellers in favor of the clubs. In mid-1949, while the FTC was still investigating this claim, the ABA complained about alleged fair trade violations by the Dividend Book Club, and joined a complaint by Burrows, Cleveland, that publishers were unfair in exempting book club selections from fair trade pricing. In February 1951, the ABA joined Columbia Records’ suit against the retailer Sam Goody for cutting prices on fair-traded records.

Meanwhile, the fair trade laws were being tested in other fields. In May 1951, while the ABA was convening in Cleveland, the U.S. Supreme Court handed down a decision that laws binding the nonsigners of fair trade contracts were not valid in interstate commerce. A wave of price-cutting broke out in many areas. This continued sporadically until, in July 1953, a new federal law went into effect, the McGuire Act, again authorizing the interstate application of nonsigner provisions in state fair trade laws.

Two months after the May 1951 Supreme Court decision, there came an announcement by the FTC that it was issuing complaints against six publishers, charging them with, among other things, unfair discrimination in leasing plates exclusively to clubs, and in requiring retailors but not book clubs to honor fair trade prices. The publishers were Doubleday, Harper, Houghton Mifflin, Random House, Simon and Schuster, and Little, Brown. The ABA supplied witnesses to support these FTC charges, but opposed another item in the complaint, a challenge to the application of price contracts to nonsigners; the latter point, anyway, was dealt with by the McGuire Act. The full Federal Trade Commission in two decisions, in 1953 and 1955, ruled that a publisher (the case had boiled down to Doubleday) could grant exclusive publishing rights to a book club under the publisher’s copyright proprietorship; and because of “overriding public interest” that the publisher must not agree with a club that it would require any bookseller to maintain minimum prices not required of the club; that the publisher must not discriminate in its prices to competing wholesalers; that books are in “free and open competition” and can be fair traded.

For more than a decade after the McGuire Act was passed, violations of state fair trade laws were contested in the courts, and from 1958 to 1964 the ABA backed successive bills to strengthen price stability. But these bills failed to pass.

The rise of discount retailers throughout the country had spurred the ABA’s support of such legislation. Conventions and regional meetings through the late 1950s and early 1960s produced loud cries against discounters. To a large extent, however, fair trade in the book industry has fallen into disuse in the decade up to this writing. The complaints at ABA meetings about price-cutting diminished gradually (though never to the point of silence). Discount selling became, perhaps, more widespread than ever, but price-maintaining retailers seemed increasingly able to minimize its effects.

At several conventions, for example, some booksellers counselled their colleagues to do a little selective price-cutting of their own. The bookseller would thereby take away the discounter’s principal advantage, while continuing to offer the professional bookseller’s services: personalized attention, a well-trained staff with good knowledge of books and the local market, a comprehensive and varied or specialized stock, special-order handling, and other advantages not offered by the discounter or the sort of department store that ran a loss-leader book section with ephemeral stock and ill-informed clerks. The trained bookseller’s displays of high-quality paperbacks, his remainder stock, and his special sales in the store and by mail could all strengthen his position when it came to price competition, it was pointed out in repeated ABA panels and workshops. The ABA’s professional training and education programs were increasingly directed towards the kind of efficiency and merchandising that would make the serious book retailer less vulnerable to unfavorable conditions — including cut-rate competition. Moreover, it became increasingly arguable in the late 1960s and early 1970s that there was room for many different kinds of booksellers; specialists were finding their clienteles; the remainder chains had a useful function (and were selling most new titles at full price); and the established personal and professional booksellers were indispensable.

The most formidable price competition continued to come from the book clubs, and it was still not known how much — on balance — club prices injured the bookstore sale of books offered by the clubs, and how much, on the other hand, the club promotion created sales in stores.