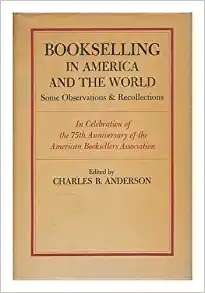 This excerpt discusses ABA’s operations during the 1950s and 1960s. Booksellers can read the previous entry in this series here.

As the ABA looked increasingly into the trade’s economic conditions in the ’50s and ’60s, it accordingly gave growing attention to the management and merchandising techniques that might alleviate that condition. It continued also to try out a variety of services directed to the same purpose.

An ABA Bulletin page in September 1951, listed some of those services — some later terminated after becoming outdated, and a few still in effect: The Returns Calendar, no longer needed by 1963, when most publishers had ceased setting specific dates for returns; the Order Distribution Service, long useful, but too cumbersome and costly to keep up after publishers moved their order fulfillment divisions out of Manhattan; wrapping materials; display fixtures; advertising mats; general information provided by letter or telephone; the hardbound and paperback Basic Book Lists; Give-A-Book Certificates (at this time redeemable at any member store, but later simplified for sale and redemption at a single store only); the indispensable ABA Book Buyers’ Handbook (which during Mr. Duffy’s years at the helm of ABA developed into a comprehensive, encyclopedic, looseleaf volume revised annually); and lists of publishers’ mailing pieces and pre-pub and other special offers.

For many years the Bulletin included occasional instructional articles by experts — information on taxes, invoices, special orders, rental libraries, sidelines and many more topics. Mailed with the Bulletin were advance versions of numerous chapters written for the first edition of the Manual on Bookselling. The evolution of the Bulletin in February 1973, into the ABA Newswire, featuring schedules of author appearances and major book reviews, plus essential news, is familiar to ABA members and friends. Additional management tools continuing today include Basic Book Lists, in alternate years, of hardbound and paperbound books; the Sidelines Directory, started in 1955, most recently revised in 1974; and a Bookstore Staff Manual, 1953, also revised in 1974.

The handling of special orders was a problem for both publishers and booksellers. In order to speed service and reduce costs to both publishers and booksellers, discussion between ABA and ABPC committees led in 1957 to a report recommending a unified Single Copy Order Plan. Revised over the years, the plan involves prepayment with the order and the use of multiple-copy standard order forms, supplied to any booksellers through the ABA office, thus securing from most publishers a maximum single copy discount.

Convention programs after World War II featured many sessions to help members learn how to improve their management and merchandising methods. In 1952, convention speakers talked about how to get more income by selling toys and records. Sidney Satensteing, head of American Book-Stratford Press, got the ABA to help publicize a drive to encourage the use of books as business gifts. Other speakers explained ways for the bookseller to do promotion by radio and make use of the cooperative ads. Panels in 1953 spotlighted the bookseller’s use of direct mail, efficiency in buying and sales procedures, and staff training.

At the 1954 meeting, which drew nearly 900 people to Atlantic City, the ABA presented the first of a new series of awards to publishers for promotion that helped booksellers: point of sale items, statement enclosures, separate mailing pieces, kits of items for a single campaign. The problems peculiar to different kinds of booksellers were recognized by holding separate group meetings of large stores and chains, personal shops, shops in college communities, and department stores.

Similar themes were pursued in the next several years at a dozen regional meetings. The dominant trend was positive, said President Joseph Houlihan of Lexington, Kentucky, at the 1955 convention, and he welcomed this especially because the ABA had been “so often negative.”

Through the 1960s, management and merchandising continued to be major themes of national and regional meetings. One management topic, that of staff payrolls, seems to have come up at only one national convention, 1962; at that time, an early bird panel reported that staff salaries were generally abysmal. At other panels that year criticism was leveled also at bookstore promotion. Booksellers do not take advantage of the promotion opportunities offered to them, a speaker said. And a discussion of “how to survive price cutting,” Igor Kropotkin of the Scribner Bookstore, New York, suggested that booksellers could not expect outside help against price competition. “Our destiny is in our hands alone,” he declared.

It was precisely in order to help booksellers strengthen each other’s hands that leading booksellers described, at panels and workshop meetings, their own promotion and advertising, their sales and mailings, their specialized departments, their staff training, their handling of inventory. Experts talked on store security.

As a practical demonstration, the ABA introduced in the trade exhibit at the Washington convention in 1962 its own Model Bookstore, exemplifying display and promotional methods, stocked with publishers’ current titles, and manned by expert Washington area personnel. From time to time, techniques for recording sales, handling inventory, preventing theft and dealing with other problems were demonstrated. Newcomers to bookselling were especially invited to the Model Bookstore for advice and suggestions. This began the ABA’s long-standing practice of enlisting a group of experienced members at each convention to make themselves available for consultation with new and prospective booksellers.

“Learning sessions” — informational and how-to meetings — were especially stressed at the 1973 convention, the first full convention in the West in ABA history. Large numbers of booksellers attended who had never been to an annual meeting before. One of the sessions dealt with the “new breed” of booksellers — young, innovative, flexible, educated, consumer-oriented men and women, often unconventional, and in most cases dedicated to bookselling.

Ever since the early 1920s, when an earlier “new breed” was coming to the fore — keepers of the “personal bookshops” and a few brilliant specialists in children’s books — the ABA had been holding panels on specialized kinds of bookselling and merchandising. Discussions of the children’s book field were renewed in the late 1940s. In the 1950s, the Children’s Books Council (editors and publishers) had space at the conventions, and in most years since the mid-1960s the CBC took part in convention programs on children’s books.

Religious books, similarly, were the topic of specialized sessions from the 1920s onward. For some years, Lenten and other book lists of traditional material were used by ABA members. In recent years, the Religious Publishers’ Group cooperated in ABA panels on trends in this increasingly widely defined field. Other specialties have had occasional attention — technical books, rare books — but only once, apparently, has there been a major session on the novel. That was in 1974, and it drew an audience of several hundred.

For many years both mass market and trade paperbacks were puzzling to booksellers — how to order them, where to put them, how to make them pay — and through the 1950s ABA held occasional discussions of them. A particularly important session was led at an Atlanta regional in 1956 by Roysce Smith, then of Davison’s. He emphasized the bookstore potential of paperbacks in what PW called a “seminal talk on the subject.” In 1960, the ABA held its first extensive review of relations with paperback suppliers, and early in 1961 Kroch’s & Brentano’s prepared and ABA issued the first Basic Booklist of Paperback Titles — 300 titles in 16 categories. Paperbacks became a feature of the Model Bookshop in 1968.

Since the mid-1920s, ABA has been consistently involved in the cooperative promotion of reading as well as in promotional services for members. Most booksellers have enthusiastically used the Children’s Book Week materials since that celebration began in 1919; have promoted the Newbery and Caldecott children’s book award winners; and have taken part in book fairs. Convention panels have explained the pesky problems and successful techniques of operating book fairs and bazaars. In this connection, the ABA in 1952 sent around the country, for exhibit, two sets of 300 juvenile books chosen by the CBC.

In 1949 the ABA joined with the American Book Publishers Council and the Book Manufacturers’ Institute to co-sponsor in 1950 the first presentation of the industry’s joint National Book Awards (originated in 1948 by the BMI as the Gutenberg Award). In 1854 the nonprofit National Book Committee was formed “to keep books free, make them widely available and encourage people to read.” The committee launched National Library Week (actually a year-round reading promotion effort) in 1958 and was given the administration of the NBA in 1959. Bookstore collaboration in these efforts was uneven, though often effective on a local level. But the committee’s nationwide, cumulative impact was significant, even if intangible, for most stores.

In the New York area, the Book-and-Author Luncheons conducted by the New York Herald Tribune and ABA jointly, beginning in 1937, were widely popular and, at one time, brought business to the area bookstores that promoted them. The program provided a model, also, for luncheon programs in many other cities. After the H-T expired in 1966, the Book World review supplement and later Saturday Review/World were co-sponsors. But the 1973 season was the last for the New York luncheons. Their function had largely been replaced by TV talk shows. Outside New York City, where community and newspaper involvement were possible, the luncheons continue to thrive.

An ambitious cooperative book advertising and bookstore promotion scheme was tried in 1959 and 1960 — four seasonal cooperative ads in regional editions of Time, at Christmas and in the spring, with supporting radio and poster promotion, with as many as 26 publishers and 100 booksellers sharing costs, and with bookstore names and locations listed in the ads. Two of these promotions had co-sponsors — Oxford Paper for one, PW for another. The results seemed financially favorable for most participants, but the trouble involved discouraged any repetition.