Stacy Mitchell on the New Localism: Time to Up the Game 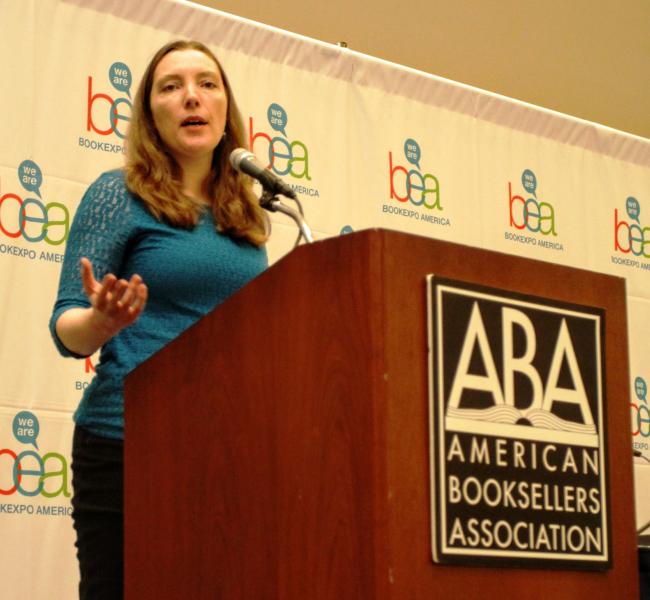 In her talk, Mitchell, co-director of the Institute for Local Self-Reliance, addressed the challenges facing the localism movement in a period of transition and gave an overview of key policy issues and advocacy goals. Mitchell’s overriding message was simple and direct: Even as independent booksellers and other Main Street businesses are seeing gains, it’s imperative that significant challenges are met head on.

Providing a few highlights of the localism movement’s growth, Mitchell reported that there have been net increases in the number of both independent bookstores and independent grocery stores over the past dozen years. “There’s been a huge growth in farmer markets and craft breweries,” she added. “Ten years ago, we had a handful of Local First organizations, and now we have well over 150 of these organizations across the country.”

Localism is on people’s minds today in a way that it wasn’t just 10 years ago, Mitchell said.

Mitchell pointed to the annual survey of independent businesses conducted by the Institute for Local Self-Reliance and Advocates for Independent Businesses, which found that those businesses in communities with Local First campaigns are seeing a significant increase in sales and are reporting many benefits, such as new customers, more media attention, and more attention from elected officials.

The result of more elected officials understanding the importance of a healthy local economy has been such “policy victories” as the growing number of states that have passed sales tax fairness laws, Mitchell noted.

There is also a new era of fiscal transparency due to a recently passed national accounting rule that requires cities and states to annually disclose how much money they give out to corporations in subsidies. Since then, the “mega-deals” have been “cut back by 70 percent,” Mitchell noted. And cities like Cleveland have instituted a local purchasing preference law, where a certain portion of the city purchasing budget will go to local businesses.

This overall shift toward buying local has been driven by a number of factors. One of the most important has been “the work of independent booksellers and other independent businesses to deliver this message about the importance of supporting local businesses,” said Mitchell.

Local First campaigns have had a tremendous impact and have been helped by broader cultural and generational shifts toward a strong preference for urban shopping and living among Millennials.

While the victories for small, independent retailers over the past decade are many, there are still obstacles. “The challenge for us now is how we take this from being an isolated number of places to make it a broad part of the mainstream,” said Mitchell. “How do we make localism central to the conversation about the future of the economy? How do we make it central to the political discussion that’s going on in this country?”

While there is a burgeoning localism movement, on the other end of the spectrum is a threatening consolidation of corporate power.

The chief example of this, Mitchell said, was Amazon, and she compared the online giant to business monoliths of an earlier time. She likened Amazon to the early railroads, which controlled not just the rails, but also steel mills, granaries, and other types of companies — those “who would purposely favor their own companies in terms of the rate to deliver product to market, and if you were a competitor to them, you would get really high costs,” she said.

Amazon, she said, similarly has a reputation for using its “size and power” to intimidate competitors that bypass it as a gatekeeper to the online marketplace. As an example, she noted that Amazon had dramatically discounted the cost of diapers in its effort to strong-arm Diapers.com into agreeing to be acquired by Amazon, as reported by Brad Stone in The Everything Store: Jeff Bezos and the Age of Amazon (Little, Brown and Company).

Mitchell also argued that Amazon has been aided by the sales tax loophole as well as government policy, picking up over $430 million in taxpayer money in the last two years alone. She pointed to the Civic Economics study commissioned by ABA, “Amazon and Empty Storefronts,” which showed that in 2014, Amazon resulted in a net job loss nationally.

“We have this thriving localism movement, but we have new challenges, and we need to up our game to meet those challenges,” said Mitchell. This is an opportune moment for going to the next level of the movement, she added.

Mitchell outlined suggestions to help booksellers invested in the localism movement meet these new challenges, including:

Following the presentation, booksellers participated in small-group breakout sessions based on their store’s location to discuss the highlights of Mitchell’s plenary.

Suzanne Droppert of Liberty Bay Books in Poulsbo, Washington, said the breakout sessions were essential for booksellers from the Seattle area, where Amazon is headquartered. “In Seattle, we have a different conversation about Amazon because they are local. We can’t have the same conversation as every other region,” she said.

Because she has noticed an increase in Amazon packages at the post office and being delivered by the United States Postal Service on Sundays, Droppert said her newest focus is finding a way to talk with customers about redirecting their money to local businesses, a sentiment other booksellers in her breakout group shared. “When you see those boxes, you know people are shopping on Amazon,” she said. “We have to have that conversation with customers about shopping locally.”

Gillian Kohli, co-owner of Wellesley Books in Wellesley, Massachusetts, said Mitchell’s advice to get involved with one’s local chamber of commerce and/or downtown association has proven successful with her business.

Kohli, a member of the board of directors of the Wellesley Chamber of Commerce, said her acquaintance with the dean of the community college, also a Chamber member, led to her approving the use of a free event space normally unavailable for outside events; additional fees were waived for security and janitorial costs, which would have required selling many, many books to recoup, Kohli said. “I don’t think [the dean] would have waived it had it been a cold call asking her if there were any exceptions.”

Zsamé Morgan, who will be opening Babycake’s Book Stack in St. Paul, Minnesota, said the plenary and subsequent breakout sessions were immensely informative, especially while in the planning phases for her store. “I wasn’t aware of how localism affects the bookselling industry or the other industries in my life,” she said. The benefit of the breakout session, she added, “was to see how I can apply this to my own business and my community. I heard lots of ideas from the people already on the ground and living this.”

Quinton Blackwell, of the soon-to-open AOM Bookshop in Indianapolis, said the critical lesson he took away from the plenary and breakout session was how important it is to connect with his local politicians when working toward creating a locally minded community. “If I’m not reaching out to local politicians, then my localism movement is nothing,” he said. —With reporting by Dave Grogan, Sydney Jarrard, and Liz Button