Steven Johnson Explains “How We Got to Now” 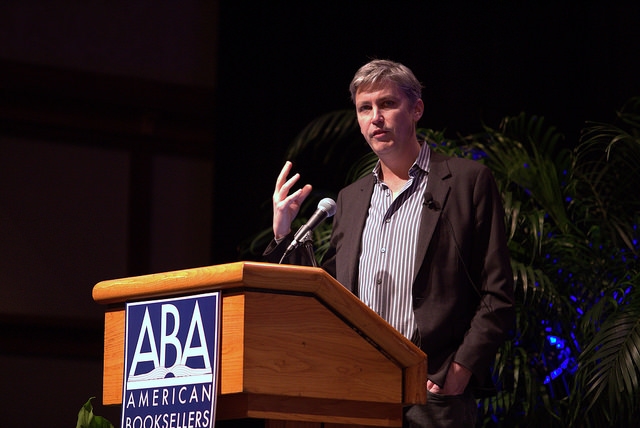 Author Steven Johnson kicked off the American Booksellers Association’s lineup of plenary speakers at the 10th anniversary Winter Institute with a Monday morning keynote that discussed how serendipitous collisions of ideas have, throughout history, driven innovation and fostered creativity in unexpected ways.

Johnson, a science and technology writer, is the co-creator and host of How We Got to Now, a six-part television series on PBS that shares its title with his latest book, How We Got to Now: Six Innovations That Made the Modern World (Riverhead Books).

In his talk, Johnson identified how such physical spaces as indie bookstores often set the stage for the creation of intellectual networks and the generation of ideas that, however unintentionally, end up changing the course of history.

For example, he pointed to 13th century Venetian glassmakers who were confined to the island of Murano, a place that he said “became a true innovation hub, the Silicon Valley of the13th and 14th centuries.”

These glassmakers were able to make the most transparent glass, right around the time that Gutenberg invented the printing press. Eventually, the general populace began to read books, and this exposed the need for eyeglasses. Eventually, lens-making as an occupation led to discoveries that prompted the invention of the telescope and the microscope, which led to a scientific revolution.

To demonstrate the role of indie bookstores as hubs of intellectual creativity, Johnson, whose other books include Where Good Ideas Come From, The Invention of Air, The Ghost Map, and Everything Bad Is Good for You, spoke of the “third place,” a concept explored by sociologist and author Ray Oldenburg in his book The Great Good Place: that having another social setting besides the home (the first place) and the workplace (the second place) is essential to creativity.

“That is the space where those intellectual networks collide, that is the space where surprise happens,” he added. “You go in to find surprising things that you didn’t know you were looking for and to meet other people who share some of those interests but who also might have interests different from yours. And when you look at and think about the history of innovation from this angle, what it teaches you is the vastly crucial influence of diversity in encouraging new ideas.”

Johnson also noted that the emergence of coffeehouses in the 18th century provided the physical space that became the birthplace of the Enlightenment, the greatest intellectual revolution of all time. In America, Ben Franklin met with his Club of Honest Whigs in coffeehouses to discuss electricity, democracy, and science, Johnson said, while overseas, the modern insurance industry came into being at Lloyd’s of London, a portside coffeehouse where ship captains would meet and end up sharing ideas about ways to decrease risk in shipping.

Bookstores were such places for him when he was young, Johnson recounted. Growing up in Washington, D.C., he and his friends formed their own aspiring writers’ collective at Kramerbooks & Afterwords Café, a bookstore that shaped him into the person he is today.

“Kramerbooks had carved out a space that would let someone like me, who didn’t want to become just another lawyer or a real estate developer like so many of my peers, figure out how to become me,” said Johnson.

In sum, bookstores were one way that Steven the writer “got to now.”

“I realize that is just one bookstore among thousands, but I know there are thousands of other people out there who have the same story to tell about some bookstore in their early life,” Johnson said.

Hearkening back to the trajectory of innovation stemming from the glassblowers of Murano, Johnson referred to new technology and the Internet, which has generated new challenges for booksellers from online retailers and e-book sales, as “the glass of our age.”

“I hope that you will approach all the revolutions of our own moment, all those equivalents of those glassmakers and the spectacles, with that same sense of curiosity and enthusiasm and not fear and reaction,” Johnson said. “There are challenges new technology has set in motion but, in this particular configuration and looking at the year you all had, I think there will prove to be far more opportunities.”