Minnesota will see important local, state, and national elections this fall, so, in an effort to promote political involvement within the community, SubText Books in St. Paul is offering voter registration forms for members of the Ramsey County community to fill out in-store.

In recent years, Sue Zumberge, owner of SubText Books, and Matt Keliher, the store’s manager, have fostered an environment that supports an ongoing conversation oriented toward issues of politics and social justice; this began with the store’s Resistance Book Club, which meets on the third Monday of each month to discuss titles such as Tell Me How It Ends by Valeria Luiselli (Coffee House Press) and What We Do Now, edited by Dennis Johnson and Valerie Merians (Melville House), and has now expanded by actively seeking to promote community engagement in local elections.

“We thought that a small way for us to get involved is to offer voter registration forms in-store,” said Keliher. “We’re a downtown location, so there’s a lot of diversity and a variety of people who visit us. We thought that making this available for people if they needed help was a way to [get involved].”

Keliher said that in Minnesota, the process for registering to vote is simple: visitors to SubText can complete the necessary forms, then leave them for Zumberge or Keliher to deliver to the Ramsey County Elections office within 10 days of the forms being filled out. Once the forms have been processed, they represent a valid registration with the state. As SubText cannot use the forms to leverage a sale, no purchase is necessary for community members to receive assistance.

“One of the reasons we want to [do this] is because there’s an idea about voter registration being a difficult process and people not understanding how to do it,” Keliher said. “Opening up to your community is important.”

While voter registration processes and restrictions vary from state to state, Keliher said that he hopes “other stores look into it as an opportunity” if it is available to them. “Bookstores need to reflect their community, and some communities might not want this,” he said, but in their case, Keliher and Zumberge felt it was important to get involved in any way they could.

“We felt that it was a responsibility for us just because we recognize the importance of this election,” added Keliher. “It’s a choice for every bookstore to make on their own.” 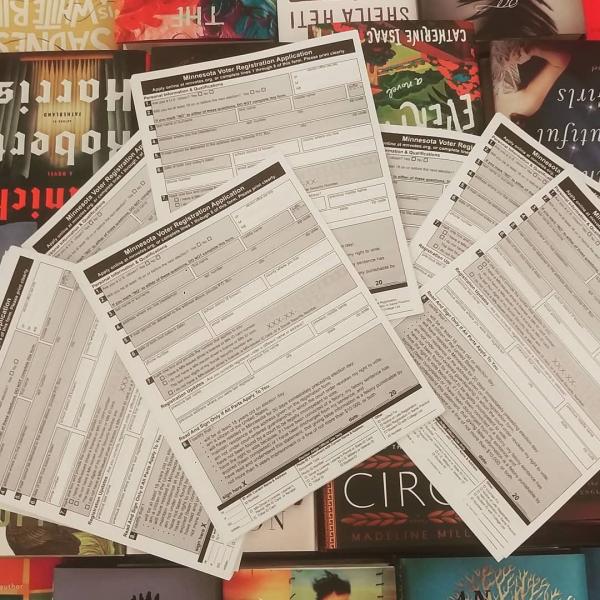 SubText Books posted a photo of voter registration forms on Instagram. The store is providing customers the opportunity to register in-store.

For booksellers who are interested in bringing a similar opportunity to their own county but are unable to provide forms for registration in store, there are other ways to reach out. “Host a ‘Civics Studies’ night,” said Keliher. “Invite members of the community to stop by and ask questions about the elections process. Things like where their precinct polling places are, who is on their respective ballots, and any other questions folks might have in relationship to the local, state, and federal democratic process.”

Keliher added that bookstores shouldn’t feel that helping to educate their local community is something they have to do alone: “Bookstores can and should reach out to local librarians to help organize and facilitate these [events],” he said. “They can even use the libraries as places to acquire much of the information and resources they will need.”

Overall, the response from SubText’s customers has been largely positive. “We put it in our newsletter and got a lot of feedback, which was really exciting to see,” said Keliher, noting that people have expressed gratitude for the opportunity SubText is offering.

Keliher said he hopes that SubText books is leading by example, since he has noticed only a few other bookstores in the country offering similar assistance: “If there’s any booksellers out there that have even sort of considered this as something they could do within their bookstore, they should take this as an opportunity to push that a step forward.”