Twenty-five feet of yellow caution tape was the favorite item in the Banned Books Week promotional kit distributed last month by American Booksellers for Free Expression (ABFE), according to a recent survey of the 485 bookstores that received the kit. One hundred twenty-nine booksellers responded to the survey. 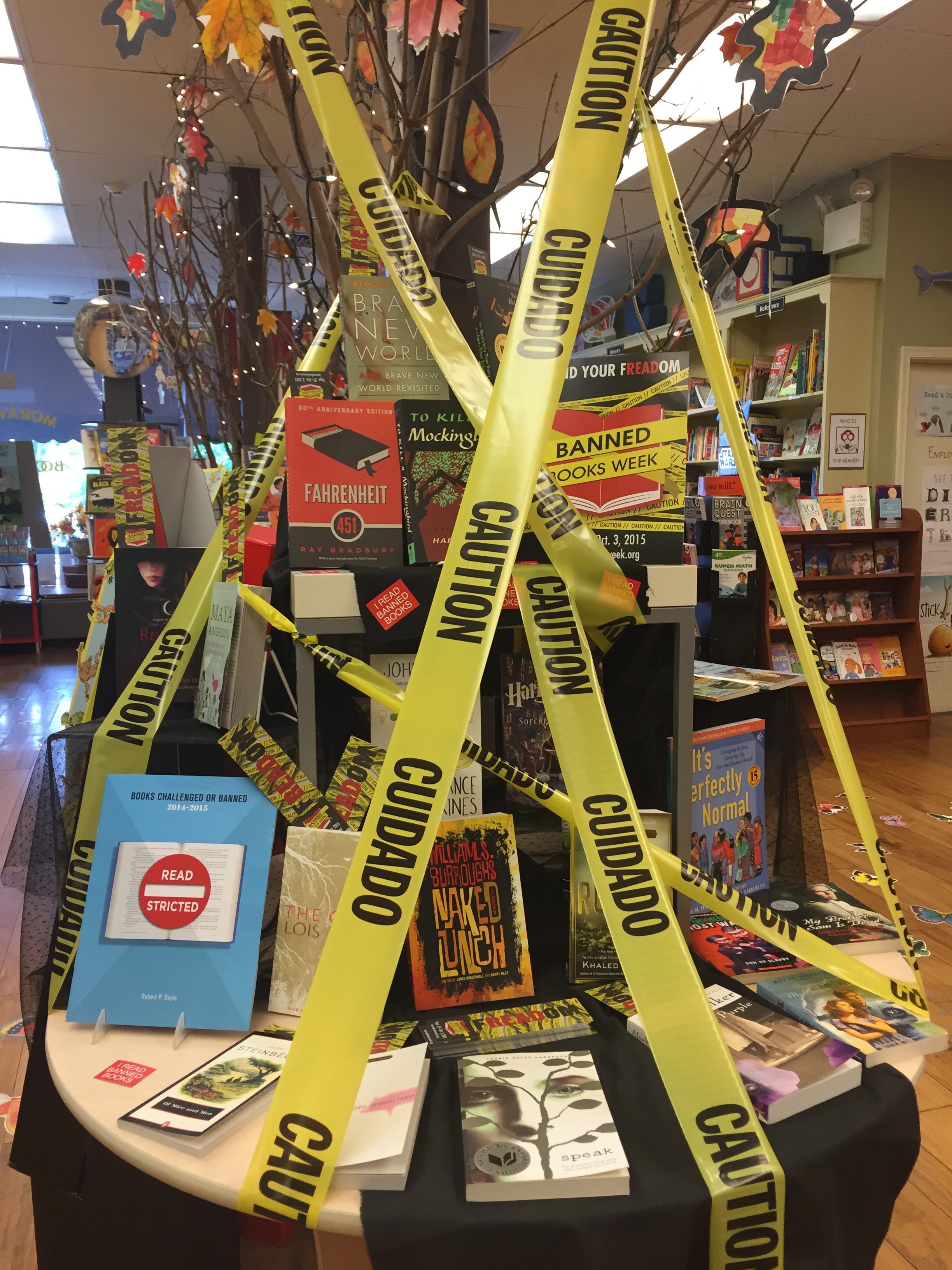 Moravian Book Shop in Bethlehem, Pennsylvania, had some fun with caution tape during Banned Books Week.

Sixteen stores (13 percent of respondents) participated in Banned Books Week for the first time this year.

Almost everyone is planning on it for next year.

The survey reveals several reasons for this strong support.

Participants believe they have a responsibility to educate the public about the importance of free speech and the persistence of book censorship. “Promoting books that have been banned or challenged shines a light on these attempts at censorship,” Adams said. “It is an eye-opening experience for many.” 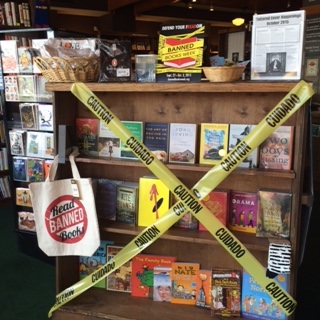 A strong majority of the survey respondents say that their customers are very interested in the subject of censorship. “They love it!” one bookseller said. “It sparks so many great conversations between staff and customers and especially people just walking by on the street who weren’t planning to come in but just had to find out why The Lorax was banned.” Many of the conversations are light-hearted. “Lots of laughs went around regarding some of the reasons,” another respondent commented.

No bookseller in the survey encountered hostile comments about their displays. But some customers misunderstood the purpose of Banned Books Week. A few even congratulated booksellers on their support for banning books.

Survey respondents were divided on how their displays affected sales. One said that customers “supported the freedom of speech by purchasing their favorite titles.” Another observed, “Our sales of books from the banned books display tables sold better than ever!” But a narrow majority reported few sales.

Even booksellers who did not sell many books reported benefits from Banned Books Week, noting that it is a very positive public relations opportunity. “Several customers who received our weekly e-mail congratulated us on our promotion,” one bookseller said. “They were happy to see us supporting the freedom to read,” another agreed. 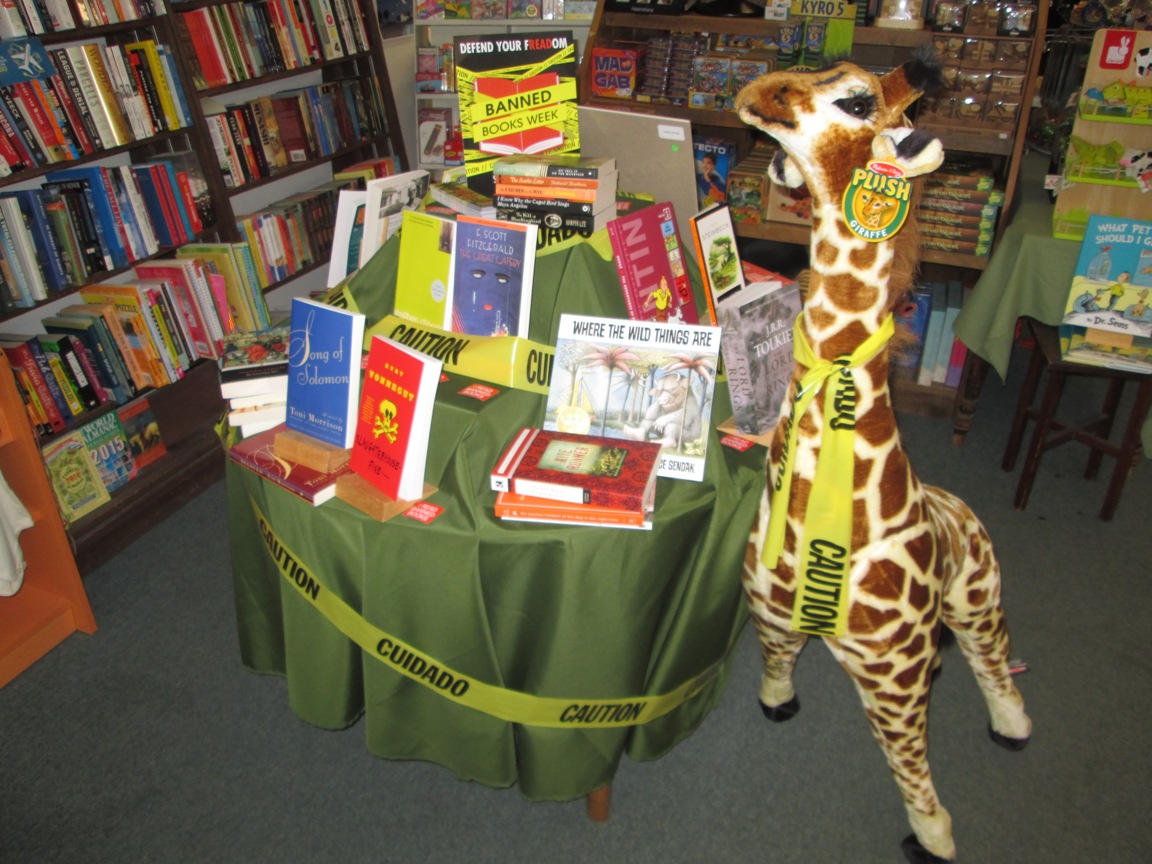 A giraffe got caught up in caution tape at DDG Booksellers in Farmington, Maine.

Banned Books Week also gives staff an opportunity to be creative in their in-store displays. It also allows them to express their support for free speech. “The staff loves talking about Banned Books Week,” a bookseller said.

A large majority of respondents praised the contents of this year’s promotional kit and the digital files posted on BookWeb.org. The most popular item after caution tape was the flier from the American Library Association listing the titles banned or challenged last year and describing why people had found them objectionable. Booksellers also liked the easel-back display, the bookmarks, and the stickers (“I Read Banned Books,” “I Sell Banned Books”).

There were many suggestions for improving the kit. Booksellers expressed a strong desire for a bookmark or flier that could be given to customers listing the year’s most challenged books and why they were challenged. A significant number also want material that explains the difference between a banned and challenged title and why it is important to talk about both.

ABFE is seeking additional comments for its survey, which will remain open through the end of the week. The survey is available here.

ABA members who did not receive the promotional kit this year can sign up for next year by e-mailing abfe@bookweb.org.