The consensus at the ABC Children’s Institute (Ci3) in Pasadena this past April was clear: Readers are not the only customers worth reaching. 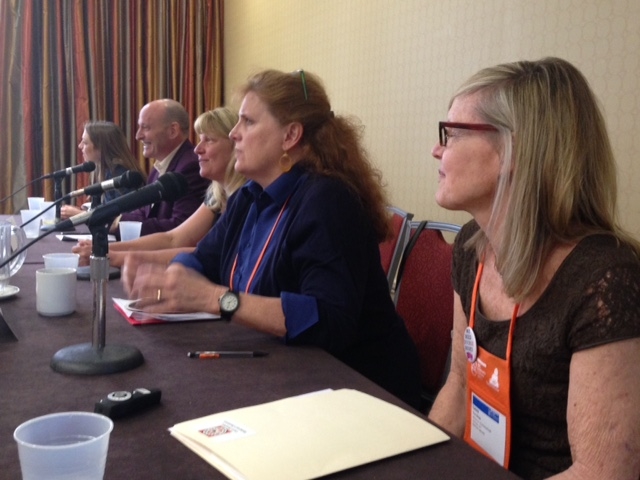 Booksellers need not look far for reminders that every reader was once a non-reader: each required that initial introduction to the one book that would change everything.

At the Ci3 panel “Reaching Reluctant Readers,” booksellers, educators, and literacy advocates who have been successful in the ongoing struggle to reach reluctant readers discussed what works best for inspiring children to want to read. Presented by the ABC Group at ABA, the panel featured Erin Barker of Hooray for Books! in Alexandria, Virginia; Margaret Brennan Neville of The King’s English Bookshop in Salt Lake City, Utah; Kim Laird, a Reading Specialist at Upland Unified School District in San Bernardino County, California; and Jon Scieszka, bestselling author and founder of Guys Read.

Moderator Laura Donohoe of Malaprop’s Bookstore/Café in Asheville, North Carolina, started the conversation by asking the panelists whether they shared a common or agreed-upon definition of a reluctant reader. “People have a lot of different interpretations as to what a reluctant reader is,” she said.

Brennan Neville began by defining a reluctant reader as “someone who is perfectly capable of reading — who tests out fine — but doesn’t want to read.” However, she noted that some adults prematurely classify a child as a reluctant reader because the child simply “doesn’t want to read everything all the time.” As an example, she mentioned a young boy whose mother categorized him as reluctant, though he quickly corrected her to say he was just picky.

Scieszka, who considers his son a reluctant reader, said school had trained his son out of pleasure reading by making it seem as though he would be tested on all reading material. “My son thought every book came with a quiz,” Scieszka said. “He just didn’t want to answer questions.” The school’s curriculum also did not resonate with his son’s interests. “Little House on the Prairie is what killed my son,” Scieszka told Ci3 attendees. “We reached that chapter where they make a door. My son was like, ‘Really? Is this gonna be the whole chapter?’”

His son’s reluctance to read would carry over into a hatred of the bookstore as a destination, Scieszka added. His son would never want to go inside a bookstore with the rest of the family, regarding it with a dread Scieszka characterized as meaning, oh my god we’re gonna be in here forever and there’s nothing in here for me.

In contrast to his “overachieving daughter who loves reading all the time,” Scieszka saw his son and other boys fall out of reading while girls the same age were just starting to discover what reading had to offer. To raise awareness that boys are having more trouble reading than girls at every age level, he founded Guys Read. “I feel so bad they’re missing this,” Scieszka said of his love of reading. “Let’s talk about it. Maybe the solution is to recommend books boys like.”

As the panelists began swapping sales tactics for reaching children who are turned off to reading, Barker suggested booksellers ask children themselves what they had last read. If they haven’t read a book or can’t name one, she suggested asking what movies they watch or video games they play. Scieszka called this “asking the open-ended question,” with phrasing designed to invite as many answers as possible, for example, “What do you like to do?” or “What’s your favorite thing?” Barker added that she always tries to talk to each child “like an adult” and especially aims to talk directly to the child “and not the parent.” Scieszka echoed this wholeheartedly. “As long as you can make the parent shut up or go away, the kid will tell you,” he said.

Scieszka emphasized, too, that he doesn’t always insist on reading being a universally enriching activity. “Reading isn’t this thing like vegetables that you have to eat to make you better,” he said. “Reading is not the best activity. Reading about hockey kind of sucks. And there can be bad books. I love asking kids, ‘What’s the WORST book?’”

Scieszka also advocated for using reverse psychology to encourage reading, adding that booksellers have the advantage of being able to talk outside the classroom with pitches like: “Don’t show this to your teacher, she’s not going to like this.”

Laird, who sometimes handsells a title to a child by saying she hated a particular book or that it “wasn’t for her,” calls this “spite selling,” as she often finds out afterwards that the maligned title is the one the child ends up choosing “out of spite.”

Parents, too, can play a role in creating reluctant readers. A common theme of the discussion was parents who bring their children into bookstores and attempt to speak on their behalf, asking for more aspirational or academic material instead of titles that might entertain or engage their children. Parents often want their children to be reading more challenging texts than they are naturally inclined to read, without giving enough consideration to a child’s emotional development or personal interests. “You don’t need to read something that’s going to exhaust you emotionally,” Brennan Neville said.

The panelists shared stories of elementary school children who are not ready or prepared by their own life experiences to relate to books with more adult themes though they may have the technical skills to read content aimed at young adults. Parents and teachers often encourage these children, for better or for worse, to read above their grade level — a notion the panel agreed to be largely subjective. Though parents will voice concerns that a child is “stuck on one thing” and want them to “up the difficulty level or move on,” Barker validated childhood tendencies to return to the same beloved books over and over. “There’s so much to gain from rereading,” she said. “It’s okay because they’re developing speed and fluency. Developmentally, it might be fine for the kid to read an entire series twice.”

Scieszka emphasized the value in asking parents what they themselves are reading to see where their children might be coming from in seeking entertainment; as Laird phrased it, “They’re often not reading college textbooks in their free time themselves.” Brennan Neville suggested that “a great stat to drop on parents” is the well-researched notion that “the number of books you have in your house correlates with your literacy rate” even more than the content or genre of those books.

Still, Barker gives parents credit for wanting to introduce their children to the benefits of reading. “They all have their child’s best interest at heart when they come in,” she said. “Any validation that we can share helps.”

Though approaching the problem from different professions and perspectives, all of the panelists were in agreement about giving children the power to choose their own reading material. “I think choice is the biggest piece for reaching reluctant readers,” Scieszka said. “That’s what we do as readers. We make a choice.” As the panel came to an end, Barker referred the audience to Daniel Pennac’s “The Reader’s Bill of Rights” from his book Better Than Life. Pennac’s 10-point list of rights includes the right to read anything, the right not to defend your taste, the right to skip pages, and the right to not finish.