Brian Lampkin, owner of Scuppernong Books in Greensboro, North Carolina, has been in the book business since the 1980s, which is when he first began working for Left Bank Books in Seattle, Washington. From there, he founded Rust Belt Books in Buffalo during the 1990s, and went on to open his own store, Scuppernong, which celebrated its 5th anniversary on February 9. “Books are a lifetime obsession [of mine], which is probably true of 95 percent of all booksellers,” he said. “What else would I do with my life?” 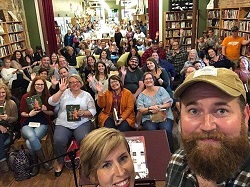 A full house at Scuppernong Books for an event with Ben and Erin Napier of HGTV's "Home Town."

During Scuppernong’s first year in business, Lampkin said, it was the energy and enthusiasm of the local community that sustained the store. “Greensboro expressed gratitude and heartfelt appreciation for the risk we took,” he said, “and it felt great to see our part in helping a downtown come back to life.”

While Scuppernong originated “as the bookstore we wanted to open,” Lampkin said, the business has “subtly shifted into the bookstore this community wants and needs. We’re much more savvy about ordering books and booking events, of course, as we learn to care for our financial viability and not just our artistic concerns.”

The past five years have been filled with events for Scuppernong: the store holds an annual “Year of the Author” series, which has focused on authors like Herman Melville, James Baldwin, and Flannery O’Connor; it hosted the Black Mountain College series and an immigration stories series; and it started the Greensboro Bound Literary Festival. Scuppernong has brought writers such as Jacqueline Woodson, Zadie Smith, Carmen Maria Machado, Rebecca Makkai, and many others to the small city.

“Greensboro had a profound literary history before we got here, but I think we’ve helped reignite that spark of history,” he said. “I’m so happy that we can help highlight the great work of writers in our community: Fred Chappell, Michael Parker, Holly Goddard Jones, Terry Kennedy, Drew Perry, Emilia Phillips, Stuart Dischell, Linda Beatrice Brown, Carole Boston Weatherford, Lee Zacharias, and on and on.”

“I think the most memorable pieces of this life have been the relationships with staff and co-workers — these are my friends and I know I will stay in touch with many of these people for the rest of my life, whether they like it or not,” Lampkin added.

For Scuppernong’s five-year celebration, M*A*S*H actress Loretta Swit visited the store to promote her book. The store also announced its customer of the year, hosted a giveaway for its remaining 2019 calendars, and offered drink specials.

What is Lampkin looking forward to in the years to come? “The fact of the future,” he said.

Let’s Play Books in Emmaus, Pennsylvania, hosted a sale for its fifth birthday this past weekend, and a larger celebration is planned to coincide with Independent Bookstore Day. Owner Kirsten Hess was first drawn to the book business when her then-two-year-old daughter was diagnosed with life-threatening allergies. “My husband and I both had demanding positions, and it was critical for me to leave work to care for our daughter,” she said. “I became a food allergy advocate, and found picture books to be my gateway into educating everyone — family, friends, caregivers, and the public.” 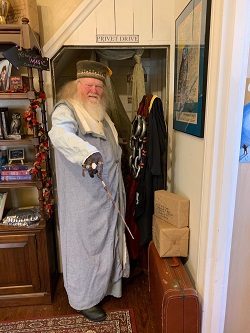 Five years after that, Hess said, she wanted to start a small nonprofit, Let’s Play Books, to use books to help foster a love of story. She also found a position working for R.J. Julia Booksellers in Connecticut, and “the rest is history,” she said.

During her first year in business, Hess’ favorite part of owning Let’s Play Books was meeting new people, as she’d only lived in Pennsylvania for three months prior to opening the store. “My goals all focused around small business management. I felt I had a good knowledge of the publishing industry, and I am no stranger to hard work. However, running a small business was a brand-new experience and I needed education fast!” she said. “I also wanted to be sure to connect with area schools, as hosting authors in local schools would be critical to our growth.”

Since then, Hess has been able to meet those goals and more. Let’s Play Books works with five local school districts, and its Authors-to-Schools program has expanded every season.

The store has changed during the last five years, as well. At the end of year three, Hess said, they relocated from a 750-square-foot store to a 2,000-square-foot shop. The store also now runs in-school book fairs, hosts special ticketed events, and handles book sales for a variety of different organizations. “All of these efforts take us away from the shop,” Hess said, “but our shop has never had walk-in traffic — it’s less than 30 percent of our overall sales — so we have to get creative!”

Hess told Bookselling This Week that some of the highlights of the past five years include moving, hosting a 250-person midnight book release at a nature center for Harry Potter and the Cursed Child by J.K. Rowling, Jack Thorne, and John Tiffany (Arthur A. Levine Books), and having her husband join her team full-time in 2016.

“We are the only independent bookstore left in the entire area, and we are working to collaborate with a lot of organizations that support the idea of indie bookstores,” Hess said. “I am hoping to move a bit out of so much of the day-to-day operations and spend more time working on goals that benefit our entire industry.”

Literati Bookstore in Ann Arbor, Michigan, celebrated its fifth anniversary in 2018. “Like most booksellers, I love books, believe in books, surround myself with books, and wanted to be involved with the privilege and responsibility of selling and recommending books to friends and strangers,” said co-owner Michael Gustafson. 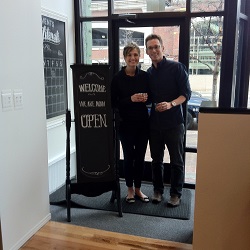 For their 5th birthday, Literati published a post to Instagram that read: "We opened Literati 5 years and a day ago. We often looked forward to this milestone. We saw it as a place in the future where we might one day feel securely rooted and supported in our community, and I can say with a full heart that we do feel that way today."

The first year in business was hard, Gustafson acknowledged. “Of course, we loved seeing the reaction from the community and meeting new customers,” he said. “However, my wife and I were also those weirdos doing our dinner grocery shopping at midnight. It was a lot of work that first year, and we were overwhelmed.”

“When we made it to that first anniversary, it felt good just to know that we had made it — we were still standing,” he added. “A lot of people outside the industry think running a bookstore is simply sitting around and reading books. It’s very much not that.”

When Literati opened in in 2013, Gustafson said that no one in the area knew who they were or what they were trying to do. Since then, the store has worked to spread the word that they exist. “We still have a long way to go, and many more goals on the horizon, but to me, getting the word out was a goal,” he said, “one that I think we as an entire staff helped do through events, great customer service, marketing, and word-of-mouth.”

Over the past five years, the store has grown considerably, which Gustafson said he and his wife, Hilary, didn’t expect when they first opened. Literati started off with seven employees and has since grown to four times that.

“With that kind of growth comes good problems,” Gustafson said. “We have had to reinvent ourselves again and again, both personally and professionally. It’s been a fun challenge.”

Gustafson also shared one of his favorite bookstore memories: “Once, I turned a corner and I saw a woman sniffing a book. She did not know I was there. I mean — she was really in there, inhaling deeply. Her eyes were closed. I could tell this was to be a private moment for her, and part of me wanted to leap out and shout, ‘Caught ya!’ but instead I walked away before she saw me. For some reason, that moment sticks in my mind.”

For each anniversary, Literati celebrates by inviting staffers and former staffers to read original work for a live, public audience, Gustafson said; Literati has a passionate staff of booksellers, many of whom are also writers. Anyone on staff at the bookstore or the coffee shop is welcome to read, and it’s always Gustafson’s favorite event. “I’m perpetually in awe,” he said.

In terms of the future, Gustafson is, in true bookselling fashion, most excited about books. “New voices, new continuations of old stories, new worlds, new ideas. I feel a little like Lucy in that famous I Love Lucy episode at the chocolate factory and the conveyor belt of amazing new fiction keeps churning out can’t-miss titles,” he said. “My bedside stack grows larger and larger as I keep swallowing as many of these wonderful new reads as I can.”