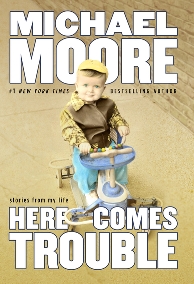 On Michael Moore’s website and e-mails, he lists three northern Michigan independent bookstores that have access to signed first editions of his new memoir, Here Comes Trouble: Stories From My Life (Grand Central Publishing): Brilliant Books in Suttons Bay, McLean & Eakin Booksellers in Petoskey, and Saturn Booksellers in Gaylord. Together the stores, which also feature the signed first editions on their IndieCommerce websites, sold nearly 1,500 copies in one weekend.

“Michael Moore has been wonderful to us. It’s been absolutely tremendous,” said Peter Makin of Brilliant Books. “We’ve been getting orders from all of the country.”

“This was amazing for McLean & Eakin and for the other two participating stores, Saturn Booksellers and Brilliant Books,” said M&E co-owner Matt Norcross. “We’ve also pledged $5 of each book purchase to the State Theatre in Traverse City, which is run by Michael and is an amazing asset to that that community, so this is wonderful for the State Theatre as well.”

Moore has worked with McLean & Eakin in the past. “We’ve had signings at the store, and when his DVD for Capitalism was released we had a similar online promotions with similar results, it was very exciting,” Norcross said.

Jill Miner, the owner of Saturn Booksellers, said that Moore was a big supporter of the Northern Michigan economy and wanted to see independent business thrive in tough times. “He approached us and asked if we’d brainstorm a way to make this work as in the past he and his staff have been deluged with autographed copy requests from all over, and they aren’t really equipped to deal with that in the way that we are.”

All three stores promoted the title on their websites. “It’s been a real collaboration between the stores to write web copy, make inserts, and research shipping and packaging details,” said Miner.  Moore has also tweeted and e-mailed fans about the availability of the books at the three indies.

Norcross hopes the sales bump will extend to the e-book format. “I’m very hopeful that this may also result in e-book sales, and I know Michael was very excited to learn indie bookstores had this capability. He promised to raise this point as he travels to promote this book.”

The booksellers involved in the promotion expressed appreciation for the efforts of ABA’s IndieCommerce team, which helped in setting up the offer on their store sites. “The folks at ABA, and those working on the IndieCommerce side in particular, were an amazing help to us in the lead up to this promotion. Without their assistance and dedication to making us more competitive online, this would never have been possible,” said Norcross.

“Scott [Nafz] and Matt [Supko] at ABA were very helpful in preparing our IndieCommerce sites, and the folks at Hachette have been very accommodating,” said Miner. “It has exceeded our wildest expectations, and Michael’s book tour and publicity haven’t even begun! We feel incredibly honored when anyone tells us we are their favorite bookstore, but for Michael Moore to do this for us has really been an incredible gift.”