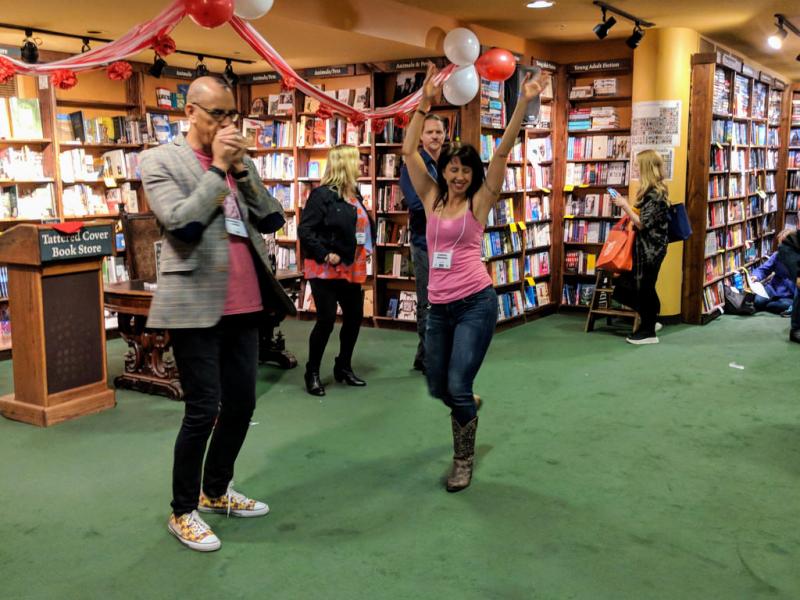 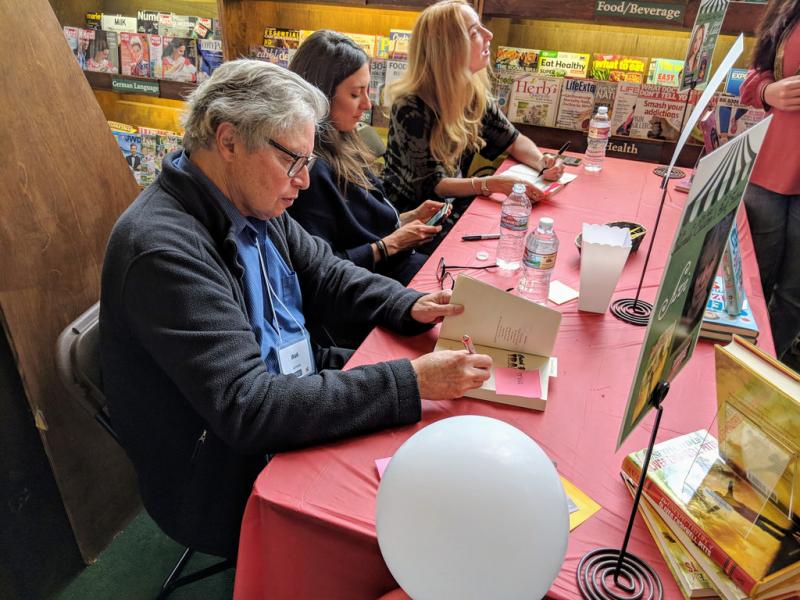 Gilligan and Vlahos, who took control of the bookstores in 2017 from longtime owner and founder Joyce Meskis, walked through the event with store staff in the days leading up to the it, but primarily commissioned back-office staff to serve as event staff along with several volunteers from Tattered’s Teen Advisory Board.

“Seeing the kids’ unabashed joy and excitement to the different parts of this event was [one of the highlights]. Those moments are why we do this. It’s all about the experience, and when you see those kinds of reactions, you know you’ve created the right experience,” Gilligan told Bookselling This Week. “The attendees were blown away…. The authors couldn’t have been more gracious with everyone. It was easy to see they were enjoying being silly and interacting with the kids. It was incredible to witness.”

While this year featured just middle-grade authors, Gilligan said next year and beyond will feature picture books and authors as well.

Brian Lampkin, owner of Scuppernong Books in Greensboro, North Carolina, told Bookselling This Week that the experience of working with the community to put on the first annual Greensboro Bound Literary Festival was thrilling. 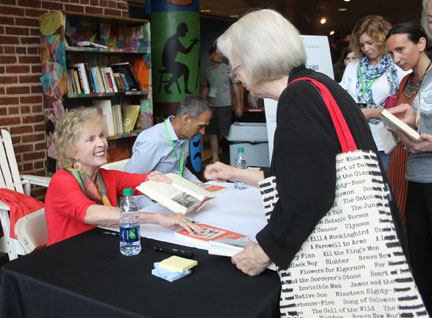 “All of the stress and worry of whether it was all going to work, which could feel overwhelming at times, turned out to be worth it,” he said. “It was just great; I could not be happier. The energy of the festival was amazing, to see how it transfers between writers and readers. All of the authors came away from the festival really psyched.”

Lampkin said around 7,500 people attended the event, which started Friday, May 18, and ended Sunday, May 20. The festival’s three days featured more than 80 writers participating in panels and presentations in various locations around the city; many of them, Lampkin said, received standing ovations. In fact, the final keynote, featuring poet Nikki Giovanni, drew 1,000 people to the North Carolina A&T Campus.

Lampkin served as board president of the 501(c)3 organization the store created in 2017 to throw the festival, but many other volunteers got on board quickly, he said. The idea first originated when Steve Colyer, a longtime veteran of the Miami Book Fair, visited Scuppernong in late 2016 and posed the question: “Why doesn’t Greensboro have its own literary festival?” Lampkin said Colyer turned out to be a tireless fundraiser for the event. 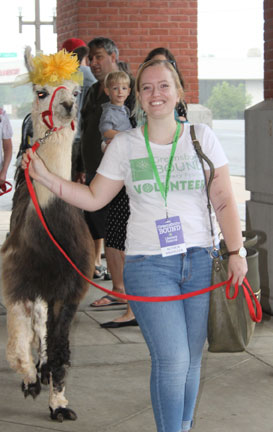 A festival volunteer leads one of the llamas that made an appearance at the Greensboro Bound Literary Festival.

Festival panels included an LGBTQ writers panel, a panel titled “Contemporary Muslim Writing Beyond Politics,” a feminist writers panel, a mental health and religion panel, and more. While most of the events did not take place at the store, Scuppernong hosted a special closing happy hour for all of the authors who participated, and everyone showed up, said Lampkin. Authors included Fred Chappell, Lee Smith, Michael Parker, Carmen Maria Machado, and Daniel Pink, among others. Next year’s event is planned for May 17, 2019, said Lampkin.

“We really wanted to represent the community, but we didn’t want to use diversity as the keyword. We just wanted to see the city represented fully,” he said. Greensboro, according to Lampkin, is home to many refugees and its population is 50 percent African American. “We were constantly conscious and aware of who we were inviting and how it represented the people of Greensboro. In the end, over 50 percent of the authors were women and 30 percent of the authors were people of color.” 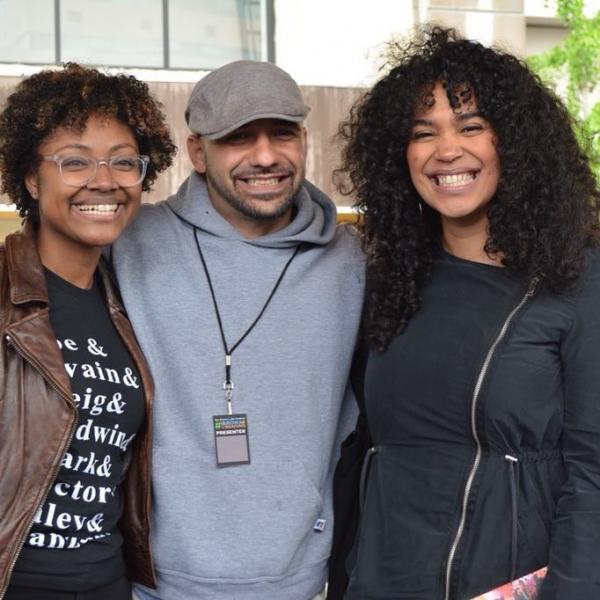 “I was completely shocked because there were so many people,” said Fennell. “It was overwhelming and beautiful. People were staying and listening and talking to the authors, even if it was not necessarily something they were interested in. It was phenomenal.”

Noëlle Santos, owner of The Lit. Bar, a bookstore/wine bar in the Bronx opening this summer, was the official bookseller for the festival, handling all pre-orders and selling books the day of the event. This included the 600 books Fennell bought from Santos to give out to local students as part of The Bronx is Reading, her new literacy initiative launching along with the festival.

Fennell said she has been slowly planning this festival for the last six years, but Veterans Day 2017 was the festival’s first official planning meeting.

“Most of the people behind the planning committee work in publishing or were editors or literary agents,” said Fennell, who has lived in the Bronx since the age of eight and has worked as a publicist for Tor Books. “A lot of the volunteers were students from Bronx high schools; some came from Penguin Random House, some were from the Children’s Book Council. Besides Fordham, we also partnered with the New York City Department of Transportation and the mayor’s office.” 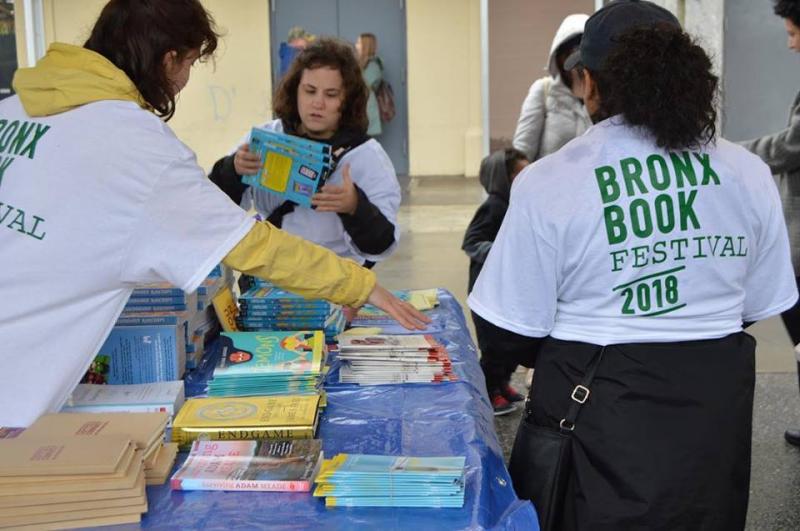 Fennell, who said next year’s festival will most likely take place on May 18 at the same location, said she has always felt there was excitement for books in the Bronx. But, she said, the outcry after the borough’s Barnes & Noble threatened to close in 2014 (it did close in 2016) was what really sparked the current energy to keep the Bronx from the fate of “bookstore desert.”

“I remember when I was a publicist, it took a year to try to get an author up into that Barnes & Noble,” said Fennell. “There was a lot of resistance because there was the stigma that no one is going to come out for an event there. But I think we’ve proven everyone wrong because people came out in the pouring rain and stayed from 10:00 a.m. to 6:00 p.m. and they were so happy to be there. So that really goes to show you something about the borough.”