Last week, Bookselling This Week checked in with four owners of ABA member bookstores whose businesses are approaching or have just passed their first-year anniversary: Jamie Degler of Turn the Page Books & Gifts, Heidi Raak of Yardstick Bookshop and Gallery, Angela Shores of Adventure Bound Books, and Karen Opper of That Book Store.

These four owners discussed what the past year has been like since opening their store, what surprised them about becoming a bookseller, and what they wished they had known before getting into business. Here are some of their reflections: 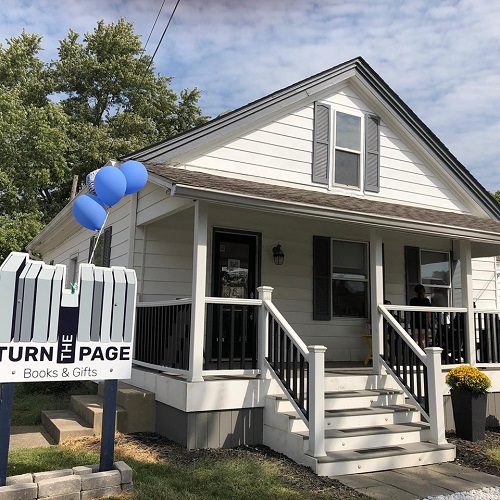 Turn the Page in Westfield, Indiana

Before diving into the world of bookselling, Degler told BTW, she took whatever job she could that allowed her to be around books. In addition to caring for four children, her previous occupations include four years as an elementary school teacher, a role at Scholastic, and volunteering at the school library.

Her 1,000-square-foot store, located in a small white house in downtown Westfield, features about 20 different genres of books, all new, as well as a children’s section, adult section, a living room area to quietly read, and a themed table of books that is changed monthly.

While she didn’t have any specific expectations going into the business last year, Degler said she has been very surprised by how long it is taking for people to realize the store exists.

“I did a lot. I paid for different marketing tools and tricks, we advertised the store where I thought it would be helpful, but you can have a neighbor living two blocks away who still doesn’t know your business exists,” she said. “That takes lots of time. Going into the second year, people are still finding out about the store.”

To keep the buzz going, Degler said she tries to stay involved in the community both as a member of a local women’s entrepreneur group, and by attending any city events she can. Going forward, she hopes to continue putting on more and different events, while also expanding on those events that were a success, like author signings, book clubs, a monthly crafting club, and the store’s subscription box program.

“We try to work closely with the other small businesses in our community, and I’ve also worked with our library and the local senior living center,” she said. “The community recently had a huge summer event, the Rock the Junction Street Party, which I attended. I’m also attending some Christmas parties this season to represent the bookstore. I basically go wherever I can have the store be represented.”

Degler said she would like to do some crossover events with other businesses in the future, like partnering with a local wine store for a tasting and a sampling of wine books, or with a local brewery for a tasting with beer and grill books; she also hopes to work more with local schools. 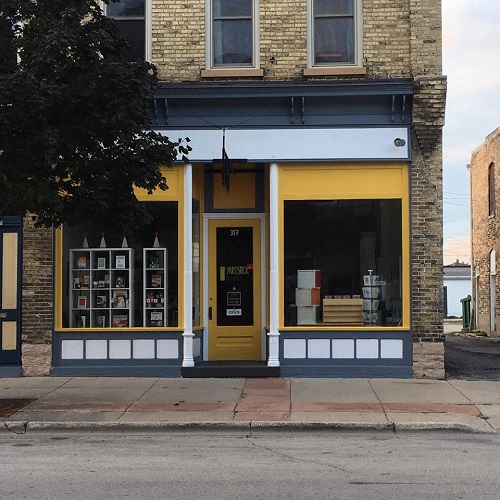 Raak is not new to the world of bookselling as the former owner of the Raven Book Store in Lawrence, Kansas, which she purchased in 2008. After selling the store to employee Danny Caine in 2017, Raak opened Yardstick in the rural town of Algoma, Wisconsin. But it has been very different this time around, said Raak, starting a new bookstore “from scratch.”

Two and half years ago, Raak purchased a commercial building, built circa 1877, in downtown Algoma. The storefront needed a lot of work, and while she had limited funds, she was able to do the majority of the renovation herself with volunteer help from friends and community members.

“I knew that it would be a huge learning curve for me coming to a much smaller community,” said Raak, who runs the store herself. “While reading and literature are valued, folks do not value bookstore culture or even the idea of purchasing books in the way I’m accustomed.  I would say that the distrust of bookstores was very dispiriting at first. Luckily, I have a solid group of friends and supporters. Things are turning around slowly and I feel more established in town.”

“Because this area of Wisconsin is politically and socially conservative, I find myself giving greater thought to my displays and initiatives,” she added. “Not watering them down, but creating a space for dialogue and being more explicit in my choices of diverse voices and books. And I’m learning so much.”

Raak’s 1,200-square-foot store operates as a general bookstore with concentrations in literary ficiton, regional books, and children’s books. Yardstick features an airy meeting space for knitting and board game groups and a small art gallery; so far, the store has hosted local and regional meetings, author events, and presentations, as well as a monthly letter-writing club. Yardstick also participates in Algoma’s first Friday gallery walks as well as other festivals and events.

“Theoretically, Algoma’s downtown is experiencing a renaissance of sorts, with quite a few galleries and new shops opening in the last three years, but there is limited foot traffic, I have discovered,” she said.

According to Raak, who serves on several local government committees as well as the local preservation organization, the store’s future success will rely on continued community involvement to draw people into the store and make it a destination. To that end, she is hoping to add a small coffee shop in February.

Before opening her store, Shores was a full-time university professor teaching graduate mental health counseling and psychology courses and had private practice as a therapist in town. 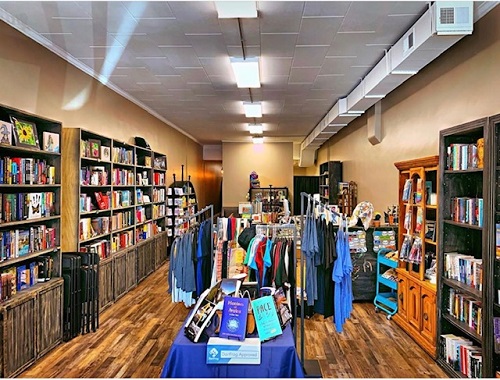 But she decided to change her career path after identifying a void to be filled in Morganton, which had not had a bookstore in over 10 years. Shores told BTW that while integration into the community has gone smoothly, there are still many locals who do not know about Adventure Bound.

“I expected the community would be super excited right away, that they would be looking for us and hunting us down, and I guess that that was not the case. That was a little bit of a surprise,” said Shores. “There was definitely a portion of the community that had been familiar with the bookstore that was there over a decade prior, but our area has experienced a lot of growth and new families moving in, so that was a little bit of challenge to let that part of the population know we were here.”

Over Labor Day, Shores, who runs the store on her own, moved the general bookstore to a 1,500-square-foot space, which is triple the size of the space she started with. What happened during the move, she said, illustrated just how invested the community has become in the store’s success.

“It was fantastic. We had some loyal customers rally behind the effort and help us pack up and move and do it quickly so that we weren’t having to worry about being closed and not being able to open for business,” said Shores. “We’ve developed these relationships in the community and we’ve made those connections, so people are invested in the bookstore being here. We could see that during the moving process, that our customers are as invested in us as we are in them.”

This past summer, said Shores, the store partnered with a local art studio to offer a book arts camp, and launched a summer reading program in partnership with a local ice cream shop. Adventure Bound also recently collaborated with a nearby university’s visiting writer series. Most recently, the store has started offering a social justice book club and is working with some independently published authors to start a writing group; Shores is also getting ready to partner with the local Foothills Pride group for a Pride story time.

The 374-year-old town of Wethersfield, Connecticut, hadn’t had a bookstore in over 25 years, so residents were glad to welcome That Book Store with open arms, said former book blogger and nurse Karen Opper. However, keeping up financially has been more difficult than she was prepared for. 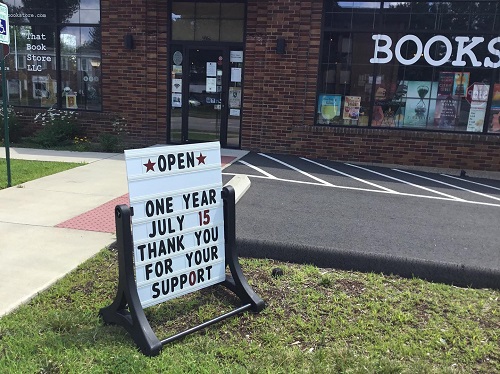 That Book Store in Wethersfield, Connecticut

“Things have definitely been harder than I thought in that way. I thought we would just be killing it. I know there’s a lot of information out there; you hear, don’t get into bookselling for the money. Despite all that, I went into it because I was convinced that I was going to make a million dollars,” she said.

From the beginning, Opper said that one of her biggest goals was to host in-store events and put her store on the map, and so far, That Book Store has had surprising success bringing in big-name authors. Through savvy pitches to publishers and a strategic approach to event grids, Opper has been able to host luncheons with Kristin Higgins, Megan Miranda, and Wendy Walker, as well as a book launch for Laura Lippman. The store also recently participated in the Epic Reads tour, which brought four more authors into the store.

That Book Store, which Opper runs with her daughter, added a liquor license in February to serve beer and wine, which has been a boon during the store’s popular trivia nights. Going forward, Opper said she would like to add more food options and a café. The store is 1,600 square feet in size but has a whole basement, so she hopes to eventually install a kitchen there. She would also like to get a bookmobile off the ground within the next five to eight years to serve parts of the state that don’t have access to physical bookstores.

“One thing this whole experience has taught me is that bookstores are so necessary,” said Opper. “I didn’t realize how much of a staple our store would be. I had lived here almost five years and I barely knew anyone in town, and now this store is a mecca, a place where people come together. They meet each other for drinks, teachers get together and talk about what’s going on.”

“It’s so nice to be that space in the community,” she added. “Now I can’t go anywhere here without someone seeing me and saying, oh hey what’s going on? And I’m like, how do you know me? It’s really, really good to be so much a part of the community, and I didn’t think that could happen.”