Dunaway Books in St. Louis, Missouri, which joined the American Booksellers Association earlier this year, is the fourth bookstore to be featured in Bookselling This Week’s occasional series “Welcome to ABA!” 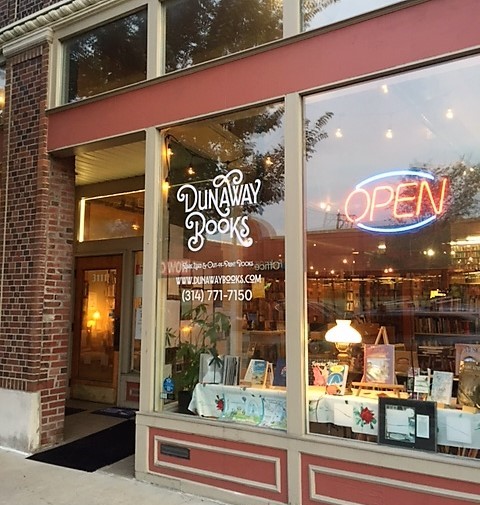 New owners Kevin Twellman and Claudia Brodie joined ABA after purchasing the purveyor of rare, out-of-print, and used books on April 1 of this year.

The couple’s romance with vintage books began decades earlier during a driving honeymoon through California in 1995, when they happened upon a first edition of Tom Robbins’ Still Life With Woodpecker. “We could afford it, and we thought, ‘It’s pretty cool to own that,’” recalled Brodie. “When we went to used bookstores, we started gravitating to things we loved. I was drawn to fiction. Kevin was drawn to history of any topic. We got hooked. Each town we went to, we went to used bookstores.”

In the years since, the couple accumulated 3,000 books, raised a daughter, and nurtured a dream to one day run a used bookstore of their own after retirement.

Twellman, at age 63, and Brodie, 59, thought those days were years off, but then an opportunity arose to purchase Dunaway Books. “Claudia and I struggled with it for several months about how we could make it work,” said Twellman, who has kept his full-time job at a provider of land title insurance.

Likewise, Brodie remains a senior vice president at real estate development firm McCormack Baron Salazar. The couple has promoted one of the store’s booksellers to full-time manager and employs a part-timer to run the store during the work week. 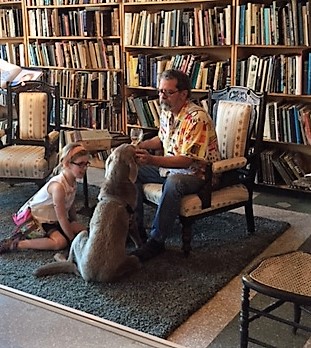 Kevin Twellman and his dog Blue greet a young customer.

During the week, after working at their day jobs, the couple do the bookkeeping and payroll from home. Despite the long hours, Twellman said the opportunity to buy Dunaway was not to be missed. “There is still a cachet to the name. People in St. Louis have known it for 50 years,” he said. “Buying the name was important.”

Dunaway was founded in 1965 by Reginald Patrick “Pat” Dunaway, who earned a reputation among bibliophiles and authors alike as a knowledgeable peddler of vintage and rare books. Dunaway’s 2004 obituary in the St. Louis Post-Dispatch describes a scholarly and eccentric figure who never placed a sign on his storefront in 37 years of doing business yet received visits from notables such as columnist William Safire and novelist Larry McMurtry.

Dunaway sold the business two years before his death to Walter H. Morris, who moved the store to its current location at 3111 South Grand Boulevard. Morris later sold the store to Peter Herrington, who was the most recent owner before Twellman and Brodie took over.

The couple said they are balancing the store’s legacy as a place where you could spend a week sifting through its 80,000 tomes with a renewed focus on community events and accessibility. The 6,000-square-foot bookstore has a main level, a basement level, and a mezzanine as well as additional storage.

“When we took over, it was cluttered. It was claustrophobic. The entire first floor was filled with six-foot-high shelving units that were absolutely jam-packed. Lighting wasn’t so good. There was no higher-end material anywhere on view. It was all locked in the storage area,” Twellman said. “We moved maybe a third of those tall shelving units out of the center of the first floor and put in new display cases that lock. Now, we have much more open space. Around the periphery of the store, we removed some shelving units to create open seating areas so people can come in with a cup of coffee they bought next door and sit on an overstuffed chair and read for a while.” 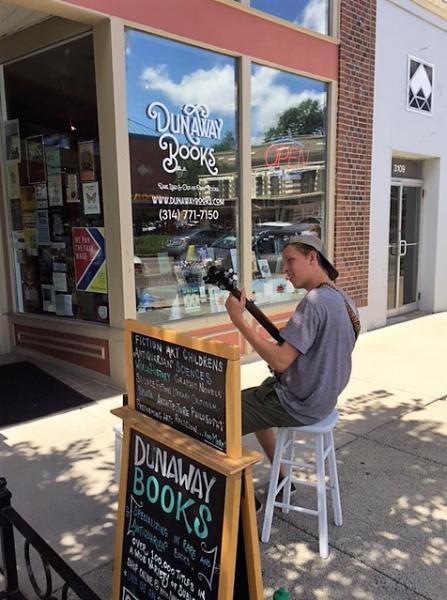 Passersby on South Grand Boulevard will also notice light-filled windows that Brodie sometimes re-designs as often as once a week as well as a chalkboard display welcoming shoppers.

The culturally diverse street, which is filled with restaurants and shops and near a large city park, was named a 2017 “Great Street” by the American Planning Association.

Tapping into the lively community with poetry readings and acoustic music nights is also part of the new owners’ way of opening up the store to a more diverse client roster.

“The store was attractive to serious book lovers who liked the adventure and mystery of moving through the maze. We were going for a different experience. We remembered what we loved about going to bookstores over the years, and we wanted to make it more community based in addition to being booklover-based,” Brodie said. 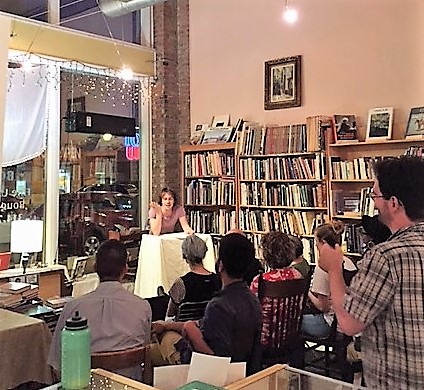 Local authors and poets are invited for readings in the newly open space.

A calendar of events can be found on the store’s Facebook page, including “An Evening of Wine, Eggnog, and Poetry” coming in December. Visitors can gather near the front of the store, where there is now a podium and room for a circle of chairs.

“We’re looking to get knitting and book clubs to get a variety of people in the store,” Brodie said.

Amid the changes, Twellman said the store plans to also serve the customers who love to simply browse through the books.

“We don’t want to discourage the bookhounds of the world coming in and finding something,” he said. “The difference is that eight months ago, somebody would come in and look for a specific title and if it wasn’t there they would leave. Today, somebody comes in looking for a specific title, and if I say, ‘No, we don’t have it,’ more often than not, they stay a while and look around.”

While the vast majority of the inventory is used books, Dunaway does carry new books from local authors, who are encouraged to come for readings. 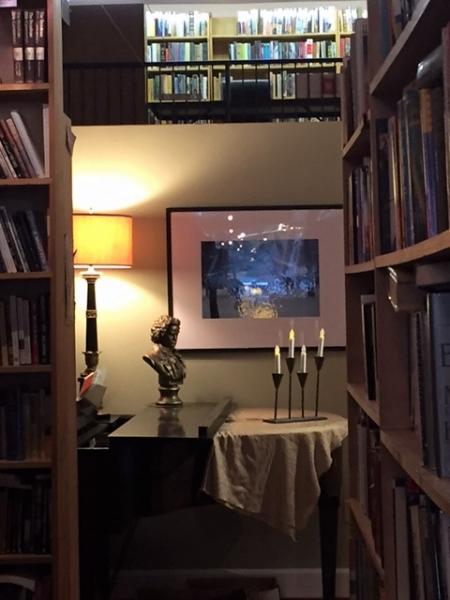 Among the unique finds in the store is a grand piano, newly tuned for customers to enjoy.

The couple has not yet had the chance to sift through the entire inventory they inherited from the previous owners, but plan to do a strategic culling of the collection, particularly in the labyrinthine lower level where self-help and diet books from fads of days gone by are collecting dust. “We want to get through the rest of the store and figure out what’s there and make room for things that move better,” Brodie said.

They are also adding to the collection, just last month buying 3,000 books from a private library in New Jersey. “We continue to buy and have the luxury of being a lot more choosy,” Twellman said.

Customers also walk in off the street with boxes of books, and they sometimes walk right back out. “Either it’s stuff we can’t use or they didn’t like what I offered them,” Twellman said.

The most important criteria is the condition of the book, but novelty also helps. “It’s common for someone to walk in with The Da Vinci Code. We only have eight copies. Even if it’s in perfect condition. We don’t want another copy,” Brodie said.

“There’s all kinds of stuff, from kids’ books priced at $2 to stuff that probably shouldn’t even be on the shelves to rarer stuff priced in the thousands. It’s virtually across the board,” Twellman said. “I’ve got the gene, so I can revel as much in a common modern first edition with a really cool inscription that’s only worth 60 to 100 bucks as a first edition of Siddhartha that’s worth $3,500.”

It’s a labor of love for them both, said Brodie, who has had to explain their choice to bemused friends and family.

“Most of our friends who heard we were doing this said, ‘Are you nuts?’ What we’re finding is that, as with vinyl LPs now, there is still a love of books and holding that book and reading to your child,” she said. “We’re seeing people come in and really enjoy being around the books. Like we do.”