What’s in a Name?: Penguin Bookshop

Penguin Bookshop in Sewickley, Pennsylvania, which first opened in 1929, is currently under the leadership of its sixth owner, Susan Hans O’Connor, who took over the store in 2014. While O’Connor didn’t name the store herself, she does know the story of how Penguin’s first owners, Isabelle L. Adams and Eleanor Gilchrist, named it when they founded the store 90 years ago.

“Their favorite book was Penguin Island by Anatole France,” O’Connor told Bookselling This Week. “They named the store after that book, and there is no formal connection with the publishing [house] Penguin. We pre-date them, actually, because Penguin was founded in 1935.” 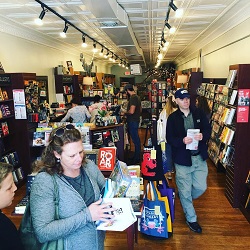 An interior view of Penguin Bookshop.

But, she noted, there is an informal connection, as she used to work at Penguin Books in New York City. “It was just serendipity that I ended up moving to a town where there was a store called the Penguin Bookshop,” she said. Her career in the book industry started in book publishing, O’Connor shared, noting that she’s always been involved in books and writing, and even worked as a freelance editor and a long-term substitute English teacher in public schools in the Pittsburgh area.

It was when O’Connor was working as an English teacher that she became interested in bookselling. “On a whim, I thought, wouldn’t it be fun to work as a bookseller part-time?” she said. “I started working at the Penguin Bookshop in our town, and within a year of my working there the owners [Janet and Bud McDanel] decided that they wanted to sell the store...My passion and my interest in books just led me here.”

O’Connor was unsure if she’d be able to afford the purchase, but she and the McDanels worked out a deal that allowed her to not only buy the store, but to have it remain in the town and continue its decades-long legacy. “The only hitch,” she said, “was that I had to find a different space because [the owner] was selling the building.”

She then relocated the store to its current home in a fully renovated space in the heart of Sewickley, just outside of Pittsburgh. The space, which she calls “right-sized” as it perfectly fits the community it’s in, is why the store continues to do as well as it does, noted O’Connor.

“We have a beautiful renovated space that is all new books, [with a] focus on literary fiction, history, and high-end sidelines,” she added, noting that the store also has a children’s section that makes up a third of its business and a selection of local authors. “The personality of the store is pretty much the same, but I’ve put my stamp on it with my publishing background.”

This October, Penguin Bookshop will be celebrating 90 years of continuous business, and the store is currently selling themed merchandise in honor of the occasion. O’Connor added that the store has two events planned to celebrate: The first event, on October 26, will be a customer appreciation day featuring food, music, and anniversary swag to thank the town for its continued support, and the second event, on October 29, will be a champagne toast with special friends of the store, including local authors, local bookstore owners, and the store’s top 50 customers, which will be determined via a Booklog report.

O’Connor noted that being a bookstore owner has also brought her a great sense of community. “As the years go on, I appreciate more and more the bookstore community and how it’s supported by the ABA,” she said. “To be able to go to conferences and meet and talk with other booksellers, have them advocate for us, and feel like we’re getting increasing support from publishers is a great feeling.

“I’m also really excited about the growing bookstore community in our area of Pittsburgh,” she said. “We have a lot of new stores and new owners. We are a tight-knit community and we all support each other.”

In the future, O’Connor said, she’s looking forward to continuing the store’s legacy. It isn’t easy, she noted, but she’d like Penguin Bookshop to remain “a strong and viable store that the community continues to see as relevant and valuable.”

“I always say that the store belongs to the community,” O’Connor added. “Our job is to continue to serve the needs of the community and to make sure that we’re still an important fixture in the community. I’m looking forward to continuing the tradition and maintaining the legacy of these two amazing women who started this store in a really difficult time in history, and following in the footsteps of all the amazing owners who have come before me.”