What’s in a Name?: Righton Books

After nearly 50 years in retail, Darryl Peck decided to open Righton Books with his wife, Anne, this month. The store opened in St. Simons, Georgia, on June 10, following months of extensive research and renovations.

Peck told Bookselling This Week that the store is named after Anne’s father, Righton. Although the family lived in Macon, Georgia, they’d travel down to go to the coast often, Peck said, noting that Righton liked to read on the beach in St. Simons. 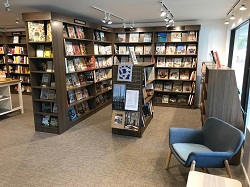 “To be honest,” Peck said, “it wasn’t one of the first names we came up with. We came up with a bunch of different names, but it’s very difficult to find domain names that you can register in this day and age that have the word ‘books’ or ‘book’ in them, and we were determined that whatever our name was, was also going to be our website address.”

While they were in the process of choosing a name, Peck said, one of Anne’s oldest friends, Elizabeth, visited and suggested Righton Books. “Anne and I looked at each other and said, yup, that’s it!” he said. “She was kind of surprised we hadn’t already thought of it. We have to give Elizabeth credit for that one.”

Righton Books will be Peck’s first foray into the bookselling industry. His career in retail, he said, began when he was 12 years old and working in his aunt’s wool shop. From there, he worked in a variety of different businesses and went on to found one of the earliest online retail companies in the world, Outpost.com, in January 1995. After selling the company in 2001, he pursued a variety of different enterprises, including owning the largest independent Apple retailer in the country, which had stores all over the southeast.

While he was researching different ideas for a new business venture in 2018, Peck said, one statistic caught his eye: e-book sales had declined and paper book sales had increased. “As someone who started one of the first Internet companies in the world,” he added, “that really grabbed my attention.”

Peck said he and his wife spent several months researching the bookselling industry, and decided that owning and independent bookstore would be a viable, albeit small, business. “I grew up in bookstores,” he added. “I grew up on the Upper West Side of Manhattan, and I spent a lot of time in Shakespeare & Co., Coliseum Books, Strand, and Rizzoli Bookstore — all the great bookstores of New York back in the day.”

Owning an independent bookstore, Peck said, is his smallest business venture to date, but the community of the small business world appeals to him.

“There’s this community of bookshops and the community that tends to understand that none of us, for all intents and purposes, compete with each other. Therefore,” Peck said, “the sharing of information and knowledge is prevalent, and that’s very appealing to me.”

He added that he also enjoys not being in constant competition with his suppliers. “When we were in the business of selling Apple products,” he said, “we were competing with our supplier all day every day, which gets old after a while.”

Righton also stocks a robust children’s section, as well as the latest fiction and nonfiction. “We spent four months selecting every one of the titles through Edelweiss,” Peck said, “which is probably the only reason we could’ve pulled this off.” He noted that they opted to subscribe to Edelweiss+Analytics, which helped them understand which titles the store should have in stock.

“We didn’t know our customers yet, and we had to figure out what we wanted to open with,” Peck said. “Edelweiss was just such an extraordinary resource...we’re technology people and we love using technology where it’s useful.”

So far, Peck said, the community has been enthusiastic. “The response has been insanely great, to borrow a Steve Jobs expression — it’s been extraordinary,” he said. “Sales have been really good.”

The best part, Peck added, “is that I came out of our very small back-up house the other day, and I looked to the right and there was all of our paperback fiction just piled on the bookshelf, and a little buzz went through me. [I thought] this is so cool — I own a bookstore! It kind of surprised me, to be honest, but it was a great little moment I had.”

In the coming months, the Pecks are looking forward to getting to know their customer base and learning what they like. Said Peck, “We’re looking forward to the opportunity to provide the level of customer service that we’re used to in our businesses over the years, and just continuing to grow the business.”