Azar Nafisi, author of the international bestseller Reading Lolita in Tehran: A Memoir in Books (Random House), will deliver the Wednesday, February 11, breakfast keynote, “The Republic of Imagination,” at the American Booksellers Association’s Winter Institute 10 in Asheville, North Carolina. 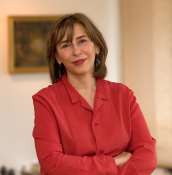 Nafisi’s talk shares its name with her latest book, The Republic of Imagination: America in Three Books (Viking), an exploration of how reading classics of American fiction informed her journey from Iran’s oppressive Islamic Republic to a new life of freedom as an American citizen.

“I envision the ‘Republic of Imagination’ comprised of communities of readers all around the world, transcending the boundaries of geography, nationality, religion, ethnicity, race, gender, and class, and sharing a common passion for knowledge,” Nafisi told Bookselling This Week. “This is the only country that needs no identity papers. The requirements to become citizens of this ‘Republic’ are curiosity, the urge to know, and empathy, the desire to connect. And booksellers in my eyes are custodians of this Republic, providing us with spaces to house the books — they are the links between the real world and that other land of possibilities, called imagination.”

Nafisi, who is a visiting professor and executive director of Cultural Conversations at the Foreign Policy Institute of Johns Hopkins University’s School of Advanced International Studies in Washington, D.C., illuminates the term “the Republic of Imagination” in her book through close readings of touchstones of American literature, such as Mark Twain’s The Adventures of Huckleberry Finn, Sinclair Lewis’s Babbitt, and Carson McCullers’ The Heart Is a Lonely Hunter.

Fiction, she believes, “comes into being with the idea of democracy.”

“A great novel does not preach the democratic values, but is shaped around them; its structure is democratic,” Nafisi explained. “The difference between a great novelist and a mediocre one (which, as Nabokov believed, is worse than a bad one) is that a great writer gets under his characters’ skin, is able to transcend his own tendencies and prejudices and create different characters with their own unique personality and voice, even the villain has his own voice.”

Fiction is focused not on epic characters and heroic deeds, she added, but on revealing the extraordinary in the ordinary, about individuals and their lives and relationships.

“As such the plot is usually shaped around the process where individuals, through a long process of trial and error, make a choice, which is simultaneously a moral choice," she said. “Novels as different as Madame Bovary, Huckleberry Finn, or Pride and Prejudice all are shaped around revelation and a questioning of not just the world, but the protagonist, who, unlike the epic or romantic hero, is self-critical, and through interaction with others discovers his or her own flaws.”

In Reading Lolita in Tehran, Nafisi wrote about how, in 1995, she taught forbidden Western classics to a small group of her former university students, despite the possibility they would be severely punished or even executed upon discovery.

Since the book’s publication more than 10 years ago, she said, the state of women’s rights in Iran has improved in certain ways: chiefly, in terms of the response by those whom it affects, rather than actual changes to the country’s oppressive laws against women.

“In terms of appearing in public, a great deal has changed, and this is due to the way women resisted being dictated to. It took over two and half decades, and still there is a long way to go,” Nafisi said. “The credit goes to the women who for over three decades were prepared to go to jail, be flogged and fined, but reject the images the regime imposed on them.”

The Facebook page My Stealthy Freedom shows examples of “how Iranian women resist the regime not by the usual methods of protest, but by becoming more themselves, she said. “Over these past 30 years, many women who were in favor of the Islamic Republic have become its fiercest critics.”

Nafisi, who is also the author of a memoir about growing up in Iran called Things I’ve Been Silent About: Memories of a Prodigal Daughter (Random House), said her own love of books was nurtured through her experiences as a young girl visiting a bookstore with her father.

“I remember my excitement as a child when I was promised that if I were a good girl my father would take me to the bookstore on the weekend,” she said. “The excitement of it, the anticipation, the way the ancient looking bookseller welcomed me with a benign smile. And I couldn’t wait until the formalities and greetings were over and my father would let go of my hand so that I could browse in the bookshelves, try to guess the story from pictures on the book covers, each book offering a mysterious world.”

That same feeling of excitement and peace still rises to the surface whenever she enters a bookstore or a library today, Nafisi said, adding that attending the Winter Institute for the first time will be like getting the chance to visit hundreds of bookstores at once.

Nafisi will present “The Republic of Imagination” keynote address from 8:30 a.m. to 9:45 a.m. on Wednesday, February 11, in the Grand Ballroom in the Grove Park Inn’s Vanderbilt Wing.