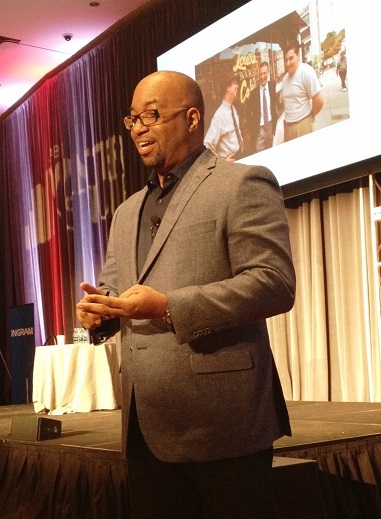 Alexander is the author of the Newbery Award-winning middle-grade novel The Crossover and the founder of literacy programs Book-in-a-Day and LEAP for Ghana. His new picture book, Surf’s Up, illustrated by Daniel Miyares, will be published by NorthSouth Books in February. A multimedia toolkit for teachers called Kwame Alexander’s Page-to-Stage Writing Workshop (Scholastic) and Booked, a middle-grade follow-up to The Crossover (HMH Books for Young Readers) will be forthcoming this spring.

“My first book was published in 1995. I grew up immersed in language and literature and I wanted to be a poet,” said Alexander, who figured that in order to sell the initial 1,000 copies of his first book, Just Us: Poems & Counterpoems 1986–1995, he had to use clever tactics to convince booksellers that he was worth taking a chance on.

In total, Alexander held events at 55 bookstores for his poetry book, and as the tour came to a close at a bookstore in Hollywood, he gave money to his friends and asked them to come to the event and buy copies.

“They came to the book signing and they bought all the books. The bookstore was flummoxed. A poet from Virginia? Really? And they asked me to come back when my next book came out,” he said. “This was sort of my beginning into bookselling as a business owner, as a writer.”

Reflecting on how he went from writing love poems to winning the Newbery Medal for The Crossover over the course of 20 years, Alexander recalled where his love for books and saying yes to writing and selling books started — in his home. Alexander’s father was a book publisher and distributor as well as a bookseller, and Publishers Weekly magazines were often scattered on the floors of his home and Bookazine catalogs arrived regularly in the mail.

“These were the things that I read as a kid, and I loved reading them…. and when I turned 12, I began to loathe it,” said Alexander, who was wrangled into helping with the family business for years. Along the way, while selling at conventions and book fairs, Alexander began to realize his strengths as a bookseller, and how being persistent, confident, and engaging ultimately led to his current successes.

When Alexander started his own publishing company, one of its earliest events was with an author who lacked that same confidence and engagement. After generating clever publicity for the event through local fraternities, sororities, and radio shows, to liven up the reading at a local bookstore in Baltimore, Alexander hired two actors to leap out of the audience and begin acting out the first chapter of the book as the author began his talk.

As his publishing company grew, he attended more industry events. Alexander’s attention turned toward writing books for children after he participated in an event on children’s literature sponsored by the Florida Council of Teachers of English. “I went because I like to say yes. I love walking through doors, figuring out what’s on the other side, and then making it work,” he said, and at that conference, one of the attendees asked him if he’d ever thought about writing for children. His response was, “Of course I haven’t, but the answer’s yes!” he said.

Alexander persisted, saying yes to every opportunity, and published the Acoustic Rooster and his Barnyard Band, a picture book about jazz music featuring characters Duck Ellington and Mules Davis, with Sleeping Bear Press in 2011.

Wanting to sell more copies of the book, Alexander began attending farmers markets along the East Coast, enthusiastically and passionately pitching his book to shoppers. At one of those markets, an idea took root as he observed another vendor’s interesting paintings of frogs.

Surf’s Up, which publishes February 1, is the story of two frogs, Bro and Dude, who are going surfing, but one frog is reading Moby Dick, a book he simply can’t put down. “The idea was to tell a story about the joy of reading and to do it in very few words,” said Alexander.

“I believe that literature can empower young people. I believe that children’s book authors in particular, like teachers, have a responsibility to help children imagine a better and a brighter world,” Alexander said. “Booksellers, you all are the vehicle that gets these ideas and ideals to the children, to the teachers, to the librarians. And I can’t thank you enough for doing that. So I believe it’s important for each of us to say yes — to say yes to opportunity, to ideas, to thinking outside of the box.”

Alexander recalled how many people nurtured him throughout the years, especially those who didn’t know they were having such a profound effect on his life, and how the involvement of so many in the book business ultimately led him to where he is now. “You all are the way that we can continue this legacy of creating more beautiful people,” he said.

As he concluded, Alexander emphasized his support for bringing more diverse books into the world. “Reading is an opportunity for all of us, for all of our children — all of their colors and shapes and sizes. They’re all beautiful and it’s up to us, it’s up to you and it’s up to me, to make sure every child has an opportunity to be moved, to be empowered, to be taken somewhere else, to fall into the magic that is between the lines, just like Bro and Dude did in Surf’s Up.”