Wi13 Keynote: Amy Webb on the Future of Bookselling

Winter Institute 2018’s final day of programming featured a keynote by quantitative futurist and author Amy Webb, who presented her research on artificial intelligence, automation, and digital trends to show booksellers that thinking like a futurist can help their business succeed. 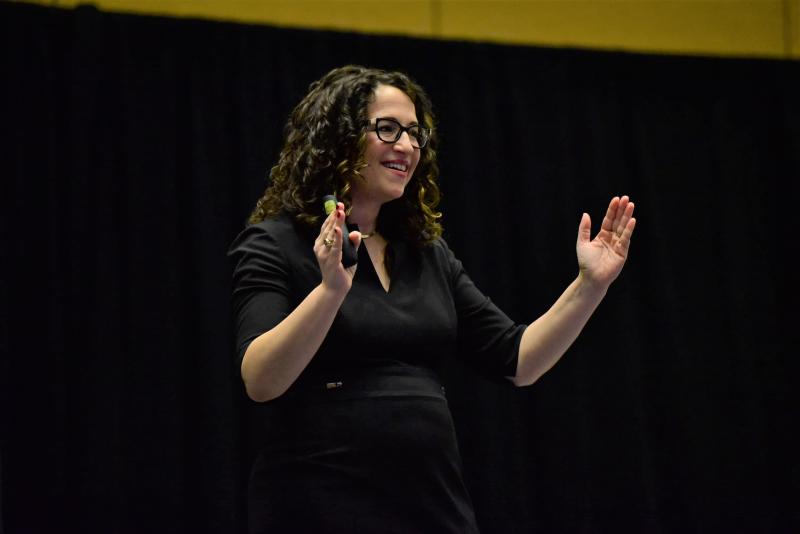 Webb is the author of three books, including the 2016 bestseller The Signals Are Talking: Why Today’s Fringe Is Tomorrow’s Mainstream (Public Affairs), which looks at how to predict and manage technological change, and her bestselling 2013 memoir, Data, A Love Story (Dutton/Penguin), about finding love via algorithms. Her TED Talk on using data to online date has been viewed more than six million times and translated into 32 languages.

In her speech on Thursday, January 25, at the Memphis Cook Convention Center, Webb, a professor of strategic foresight at the NYU Stern School of Business and the founder of the Future Today Institute, told booksellers in the audience that although it has been a great few years for indie bookstores, they need to consider how developing technologies may affect their business in the decades to come.

“I believe strongly in the value proposition of a local bookseller,” said Webb. “However, I’m a pragmatist, and so while I know you’re doing well today, my concern is that things change and I am not entirely convinced that you’re prepared for the next 10 years or for the next 20 years, which means that we all need to stop and think more carefully about our automated future, and that very much includes you.”

First off, said Webb, thinking like a futurist necessarily involves factoring in human capriciousness. Webb’s mother-in-law recently bought an inappropriately dark book for Webb’s seven-year-old daughter, Petra, for Hanukkah. She bought the book, Golem by David Wisniewski (HMH for Young Readers), which involves the mythical clay monster of Jewish folktales, because Amazon’s algorithm recommended it based on Petra’s reading level. However, said Webb,  even though many people already know about some of the flawed or harmful aspects of Amazon’s business, the company is popular and will remain so.

“Like every technology, it becomes so convenient and so easy. We keep using [Amazon] even when we know it’s bad for us,” said Webb.

Booksellers, she said, can build the future they want, but they have to “get rid of the Golem.” This means, in part, that while booksellers should continue to do what they do best — serving as hand-sellers and offering curated selections — they should also begin considering their future audience and potential customers ahead.

In her work at the Future Today Institute, Webb uses data and pattern recognition to model potential scenarios for the future across many different vantage points; then she can calculate the risks.

“As a futurist, I identify and analyze patterns and use these patterns and trends to build models for possible, plausible, and probable future scenarios,” said Webb. She then reverse-engineers these scenarios so that the businesses she works with have the information they need to make better decisions in the present. Webb’s book The Signals are Talking is about the importance of noticing the “weak signals” across many different fields and recognizing patterns early that are not necessarily obvious. A common pitfall in many people’s thinking, though, is a tendency to miss real trends in favor of shiny distractions.

“Futurists,” said Webb, “practice orthogonal thinking, [whereby] the future of one thing requires us to look at the future of many things at once.”

Webb showed a video depicting a color-changing card trick to demonstrate how by just paying attention to the cards, most viewers miss a number of other changes that happen in the video.

“We are constantly being bombarded by shiny objects in the media, by the latest and greatest tech and gadgets. Thinking like a futurist means learning how to recognize all of those other changes without getting distracted by the shiny objects,” she said, like the color-changing cards.

Webb told booksellers that the future of bookselling is inescapably connected to artificial intelligence, and its developments are certain to affect competition. Amazon now leads the way in a variety of AI-related areas, including digital voice assistance, computer vision, web services, collaborative robots, and automation in retail, including Amazon Prime Air, which provides drone-based delivery. Webb argued that it’s not productive to fixate on the new Amazon Go stores, which feature automated checkout, but to notice the general direction Amazon is going with AI on multiple levels.

Webb proposed, “Isn’t it possible that when we’re thinking about all this, that Amazon Go, which we’re all currently fixated on, is the card, is the shiny? And instead, the retail platform, the payment gateway, the customer data, the inventory systems, all being propelled by AI, in fact are the signals that you really should be paying attention to — signals which tell us something about the future of bookselling, even indie bookstores, which you would think would be sort of disaggregated from that? Doesn’t it tell us something about the future of how all of us will shop?”

It is more important, she said, to identify and extrapolate from the weak signals in the current scenario. To that end, she presented booksellers with possible future scenarios that envision the world of bookselling in 2038. Webb’s two separate sets of scenarios, one set for booksellers and one for publishers, use her observations and data to imagine three possibilities for each industry: an optimistically framed future, a pragmatically framed future, and a catastrophically framed one.

Webb created a digital folder of all of these possible scenarios, as well as detailed solutions for each, and has made it available online for booksellers and publishers who would like to explore their potential future.

The hope, said Webb, is that booksellers recognize the optimistic future. In that world, 20 years from now, independent bookstores will be thriving because they banded together in 2018 and began making some changes as an industry.

“They invested in more digital infrastructure; they now have a digital commerce and fulfillment system that’s just as good as Amazon but serves different purposes,” suggested Webb. “Fulfillment is immediate, not several days; staff are available via video chat to talk about books; authors attend virtual book tours hosted by local shops; brick and mortar is still paramount.”

“The stores still stand — in fact, there’s more of them,” she concluded. “Community members feel like they have a real stake in the local bookshops, which they see as both curators and thinking companions. You are a vital part of every single community.”