Wi13 Keynote: Junot Díaz on the Importance of Representative Literature

Junot Díaz, whose first children’s picture book, Islandborn, will be published on March 13 by Penguin Young Readers, appeared as a keynote speaker at the 2018 Winter Institute in Memphis, where he talked about his first literary experiences as an immigrant in America and the importance of diversity in publishing. 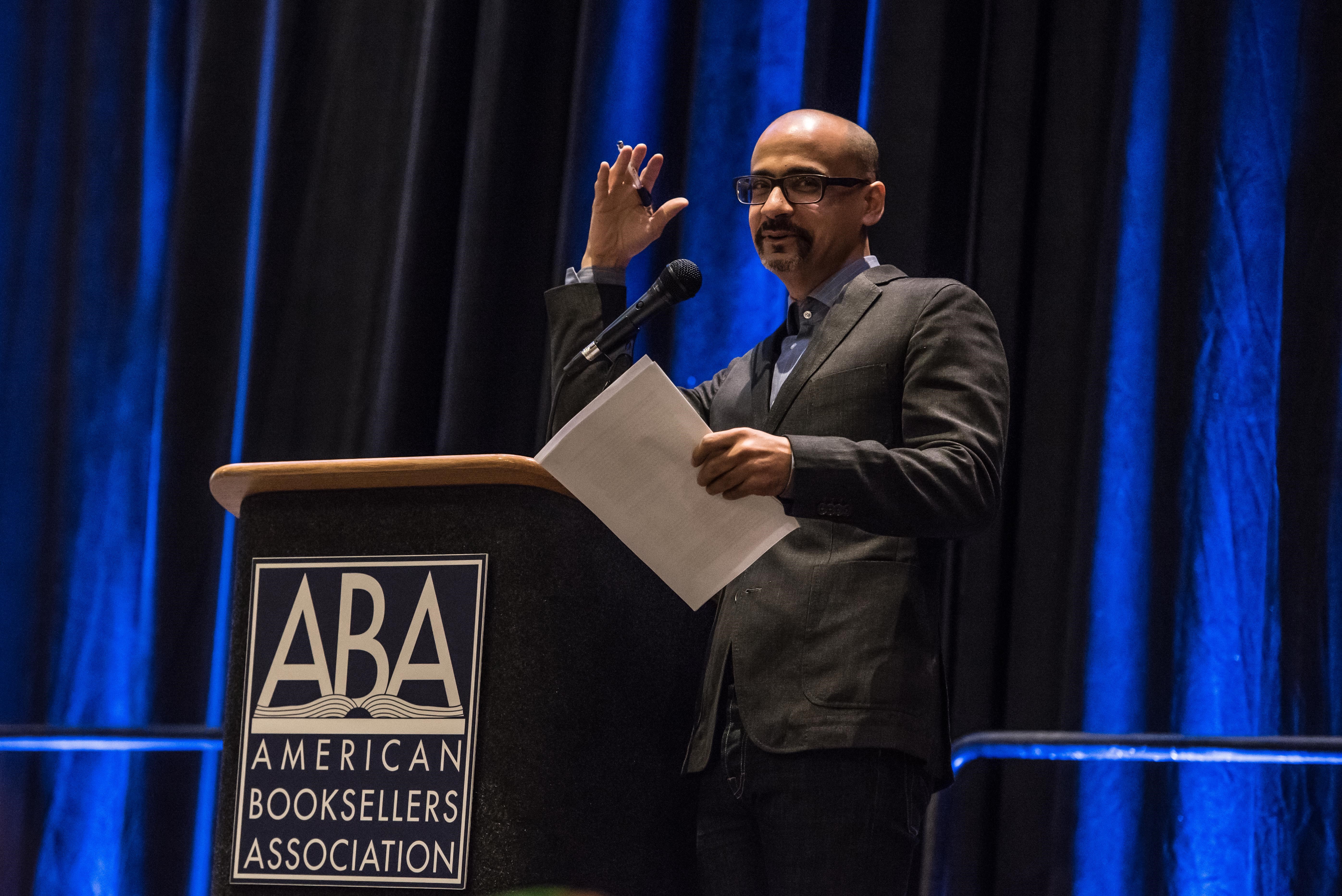 In a speech at the Memphis Cook Convention Center on Wednesday, January 24, Díaz, author of the critically acclaimed short story collection Drown; The Brief Wondrous Life of Oscar Wao, which won the 2008 Pulitzer Prize; and the National Book Award finalist This Is How You Lose Her, said that indie booksellers helped sustain his career throughout the 11 years he spent writing his second book.

“If it hadn’t been for the kind of curatorial devotion of independent booksellers, my art would have perished,” he said, “and so the debt is serious.” In a speech titled “In the Time of the Wolf and the Fox, I Dream of Books,” Díaz went on to describe the intense racism he and his family experienced after immigrating from the Dominican Republic to New Jersey in 1974. Back then, he said, being a poor immigrant of color meant that white people had carte blanche to harass and abuse them, using slurs like the N-word and spic, without repercussions.

“In my experience, to immigrate as a child is to be thrown into a hurricane. To be a young immigrant is to survive an apocalypse, an apocalypse that devours your world and hurls you naked and voiceless into another,” he said. “Nothing else can do justice to that impossible dislocation. Immigration really is as close as many of us will come to living through an end of a world.”

When he arrived in the U.S. as a child, Díaz, who is currently the fiction editor at Boston Review and the Rudge and teaches writing at MIT, spoke only Spanish, and his teachers had no patience for him. But Díaz found his escape in books after the school librarian took him under her wing. Away from the bullying and the racism of being a poor, young immigrant of color, he said, “books became my shelter against a white world that sometimes felt like it was trying to destroy me.”

However, in the 1970s and ’80s, he said, children’s book culture, like everything else, was also extremely white.

“What really killed was the erasure. God almighty, the complete and utter erasure. How thoroughly kids like me did not exist in our books,” he said. “What kid does not want to see themselves represented in what they’re reading? At that age, I might not have had the language to talk about representation or equity but, Dios mío, how I longed just once to find a book where someone like me appeared, where someone like me took part in an amazing adventure, where someone like me was a hero.”

Díaz’s new book for children, illustrated by award-winning Colombian artist Leo Espinosa, is a book that features just that: Islandborn tells the story of a young girl from the Bronx named Lola, whose teacher asks the class to draw the place where they are from. Lola, however, left the Dominican Republican as a baby, and searches the collective memory of her family, friends, and neighbors for clues about the island. The book’s vibrant illustrations show how Lola uses her imagination to come up with her own idea of home.

Díaz said that as a young Dominican immigrant experiencing racism on a daily basis, he felt caught between the world outside and the world of his books, “caught,” he said, “between the wolf and the fox,” referencing a quote by Malcolm X that describes white conservatives as wolves who bare their teeth and snarl; white liberals, on the other hand, are even more dangerous, since, like foxes, they show their teeth but pretend to smile.

It is the supreme irony, he said, that even as he was devouring these books, their whiteness was devouring him; books that erase people of color teach those children to tolerate racial slights, to internalize racism, to identify with whiteness above themselves. Díaz is concerned, he said, that young immigrants today may be having the same disheartening experience with books that he did, especially now, when the government underfunds schools and libraries, and racist, anti-immigrant sentiments are coming out of the shadows.

“It’s at times like these, when the wolf and the fox are everywhere, that children of color most need new friends both in books and in life,” said Díaz. “I fear that if we don’t get our act together, if we don’t shake our literary culture from its dreams of whiteness, we will lose an entire generation for readers, and if that happens I’m not sure we will get a chance to make reading what it could be.”

Díaz acknowledged that much has changed in the publishing industry since he was a child, including an increase in the number of books featuring people of color. At the same time, the editors, writers, and bookstore owners within the industry are still overwhelmingly, disproportionately white. Díaz’s advice to booksellers who want to change this is to continue to do what they do best, since booksellers and librarians are on the front lines of this struggle. American literature, he said, should strive to be as diverse as the country it is supposed to reflect, which can be achieved by continuing to publish people of color in all genres and by diversifying publishing’s infrastructure.

Ultimately, he said, the world needs new stories, where everyone can find themselves. Díaz said he wrote Islandborn, in part, to give kids like him the type of book he never had growing up.

“What we do today as book people will help empower the generation to come, who will have to confront again the wolf and the fox,” he said. “Perhaps they will be the ones who will do what we are not yet able to do, which is to destroy them both.”