The “Author in Focus: Why James Baldwin Always Matters” session at Winter Institute 14 in Albuquerque, New Mexico, presented by authors Casey Gerald and Robin Coste Lewis along with the National Book Foundation, attempted to help indie booksellers think about how to spread the author and civil rights activist’s work even further, sell it better, and recommend it more frequently in their bookstores. 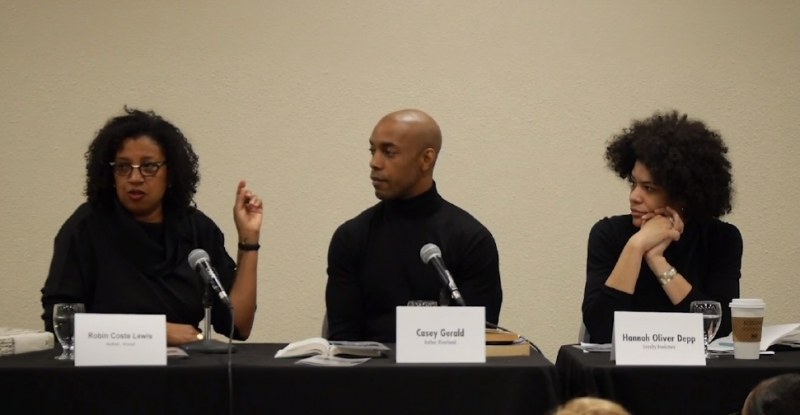 On Thursday morning, January 24, Gerald and Lewis discussed their love for one of literature’s most acclaimed 20th-century thinkers. Baldwin is the author of novels, essays, and stories that observed and critiqued humanity and examined countless facets of American society, including sexuality, politics, marriage, police brutality, the church, race, and love, in a way that still resonates in 2019.

For his part, Gerald is the author of the memoir There Will Be No Miracles Here (Riverhead), published in October 2018, which was recently named the December PBS NewsHour/NYT Book Club pick. Lewis is the author of Voyage of the Sable Venus (Knopf), which won the 2015 National Book Award for Poetry. Serving as moderator was Hannah Oliver Depp, who will soon open the new intersectional feminist Loyalty Bookstore in Silver Spring, Maryland.

Lucas said the new program was designed to generate useful conversations about “the ways that we can talk to new audiences about how to read authors that we know as famous or iconic — ways that we can frame, contextualize, highlight those authors in stores, libraries, schools, in our lives, on our own bookshelves. Are we selling Baldwin well, are we framing his work well, are we bringing new young audiences into the fold? Do we sell Baldwin like we sell Faulkner? Where are we putting Baldwin on our shelves? When we do displays, who are we putting Baldwin next to?”

Kicking off the discussion, Depp spoke about her experience first discovering Baldwin, when she found a copy of the author’s 1956 classic novel of queer desire, Giovanni’s Room, in a used bookstore at age 12. Depp said she felt “seared” by his words: “Every time you read Baldwin it’s a journey. I remember feeling seared. He’s searing and present, and getting into his nonfiction, it seems like it was written yesterday, which is wonderful and terrible in a variety of ways.”

Lewis then read an excerpt from Baldwin’s 1976 book-length essay The Devil Finds Work, a work that critiques the racial politics of American cinema. She told booksellers she had also discovered Baldwin as a teenager by way of Giovanni’s Room.

“In 1956, at a time of such extraordinarily heinous race relations in America, a black man, a genius, wrote a book that was not set in America. Let’s just start there,” she said. “[Baldwin’s book was] not giving into the isolationist ideas of what an American writer should be, doing it way before it was fashionable, and his protagonist was a white man in Europe who was the embodiment of the purest desire I had ever seen on the page, in a way that destroyed me with its clarity in terms of project, and its carriage and its gestures and its refusal to engage all of the expectations that are so horribly placed upon black writers to perform a little do-si-do, Shuffle-Off-To-Buffalo minstrel show. That he refused that so searingly in 1956 was profound. It opened up so many possibilities, of yeah, why not start in another country, why not?”

Gerald next read an excerpt from Baldwin’s 1962 novel Another Country, set in Greenwich Village and again taking on subjects of sexuality considered taboo at the time. He said he first encountered the author in college when he read Notes of a Native Son for an African American studies class but didn’t connect to it right away. But that changed after he saw Baldwin in the documentary The Price of the Ticket and then later read Giovanni’s Room, a book he said saved his life. Gerald quoted one of his favorite passages in the book, where a barman tells the book’s gay protagonist, David, “People can’t, unhappily, invent their mooring posts, their lovers and their friends, any more than they can invent their parents. Life gives these and also takes them away, and the great difficulty is to say yes to life.”

In a way, said Gerald, it would be enough if “that was the only passage of Baldwin we give to people.” In talking about the author, said Gerald, “I start from a profound place of gratitude, from the example of courage. I don’t think you would have two black queer artists sitting on one stage in Albuquerque without James Baldwin.”

Lewis, who suggested to booksellers that stores launch a James Baldwin book discussion group looking at a new book every month, then spoke about Baldwin’s unique use of the English language, how his placement of periods or commas created moments of silence that lent gravity and distinction to the work.

“Silence is a language that all black people speak fluently,” said Lewis. “That doesn’t mean it is a powerless thing. Baldwin thought about silence as immense power, and to see him play with silence and timing in his syntax and grammar was what blew my mind. I didn’t know you were able to take something that had been used to indoctrinate us and attempt to indoctrinate us into submission — I didn’t know you could take all this profound indoctrination and just spit it out and go, and here’s why, and spit it out in such a way that it made you ashamed for what English had been before. That is what Baldwin gave to me.”

For her, said Lewis, the way that books are categorized and shelved now in bookstores and libraries is antiquated and unhelpful; in a lot of ways, she said, it might even be better to shelve authors by characteristics like how they use commas, or even by their publisher. When asked where booksellers should shelve Baldwin for maximum impact, Gerald said that, since he compares Baldwin to writers like Voltaire and Dostoevsky and Didion and Audre Lorde, for various reasons, perhaps Baldwin should be displayed alongside them as a way of demonstrating the similar import of his work.

Baldwin is, as the late Mary Oliver has been described, a poet of attention, Gerald said, because “he sees so much more beyond the surface, [he sees] the human condition and, by virtue of that, our society.”

“This is why Baldwin, in some ways, reminds me especially of the novels of Dostoevsky more than any other American novelist,” he said. “There is a certain provincialism in the way Americans see themselves and the world and life and that Baldwin resists. He is always pulling you out of the provincial, even if it is the provincial of the category… I think Baldwin’s greatest gift is he brings us to other people starting with ourselves. He brings us to ourselves and to a deeper understanding of our country.”

Lewis agreed that Baldwin is an author who forces the reader to see the magnificence and beauty and horror of the world and refuses to let them off the hook when it comes to certain uncomfortable truths. “Baldwin sees so meticulously, which is a gift,” Lewis said, “but he also fervently demands that you as a reader admit that you see it too, that you stop pretending you don’t see everything — from the boy on the corner being killed by a black cop, to the feather on a bird’s wing at the windowsill outside your window.”