Wi14 Education: “Bringing Play and Revenue Into the Store: Board Games are Back!”

At the “Bringing Play and Revenue Into the Store: Board Games are Back!” education session at the American Booksellers Association’s Winter Institute 14 in Albuquerque, New Mexico, indie booksellers heard from colleagues who have integrated the hot trend and growing business of board games and play nights into their sales and events. 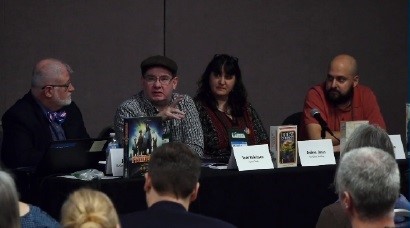 One of the virtues of board games is that they can provide the same face-to-face social interaction that is a key component of successful independent bookstores. And aside from traditional board games like Monopoly, Scrabble, and Risk, games these days have grown more sophisticated and varied, including popular digital games that have become board games, games inspired by viral Internet challenges, trading card games, memory games, math and word games, games that use miniatures, and more.

Appearing on the panel were Todd Dickinson, co-owner of Aaron’s Books in Lititz, Pennsylvania; Andrea Jones, co-owner of The Galaxy Bookshop in Hardwick, Vermont; and Victor Briseno, co-owner of Slice and Dice Pizzeria, an independent board game seller and restaurant in in Albuquerque.

John Stacy, the new executive director of the Game Manufacturers Association (GAMA) in Columbus, Ohio, served as moderator. GAMA is an international trade association made up of 1,000 individual companies in the hobby game industry, including game designers, manufacturers, publishers, distributors, and retail stores located in 21 countries. Just as ABA does for independent booksellers, GAMA provides education to members to help them sell their products better, while helping to advocate for the games industry in Washington D.C. on pertinent issues, including tariffs, imports, and customs laws.

Dickinson and his wife, Sam Droke-Dickinson, opened Aaron’s Books in 2005 and made a commitment to add a significant game section two years ago, taking about 600 feet of the store’s 1,900-square-foot floor space, mostly for tables where people could experiment with demo games.

“We loved playing board games and strategy games, so we decided to bring them in,” said Dickinson. “Ours is a heavy browsing store and we found that when a family comes in, half the people in the family wouldn’t be terribly interested in the books. A lot of them now find a table at the store and play games, which lets the rest of the family have time to browse for books, so it’s a nice mix.”

Jones’ Galaxy Bookshop is a 700-square-foot space located in a small Vermont community of about 3,000 people. While the store used to bring in some puzzles and educational games for children around the holidays and during the summer tourism bump, Jones decided to add more games several years ago after a sales rep introduced them to a dice game called Tenzi. As they were playing the game at the counter, a customer asked what they were doing and they invited her to play; that was when a light bulb went off, said Jones.

“We thought, if we’re going to sell games, we need to play them with people in the store and show how fun they are,” said Jones. “And that transitioned into planning a couple of game night events where we partnered with other local stores.”

Briseno, the third board games panelist, has owned and run Slice and Dice, a local board game pizzeria in Albuquerque, for the past 17 years. His space seats about 80 to 90 people in the restaurant, which also houses a library of 350 games and a retail section of about twice that.

“Our concept is to bring people in for our pizza, and our games are kind of keeping the people there, and then we have them browsing the other games,” said Briseno. “A lot of my customers are new to the gaming hobby, so we’re bringing people into the hobby and teaching them.”

According to Briseno’s most current sales data, the store’s number-one played game is Hungry, Hungry Hippos, a data point that will inform their future buying for more family-oriented games. At the moment, there are 14 people on staff at Slice and Dice, including three who are full-time game guides teaching customers new games.

When it comes to in-store game displays, Aaron’s Books has two large window displays at sidewalk level, as well as a large banner branded with the name of the game section, “Of Dice and Pen at Aaron’s Books,” which is also printed on bookmarks and other marketing materials. Galaxy Bookshop displays its games on a rack and most of a spinner in the children’s section and keeps demo copies behind the counter.

To prepare for the store’s first official multi-business game night, Jones partnered with the owner of a local gift shop to help Galaxy meet the minimum order for Foxmind, the game distribution company she chose, so they would have a wider variety of games available between the two shops. She then hosted an all-staff meeting where staff hung out at the store in the evening eating snacks and learning how to play and sell all the new games.

The game night took place at the store for four to five hours on a Saturday afternoon during November, the store’s off-season. Players got a ticket every time they played a game and could enter for a drawing of a raffle prize, which had been put together by all of the participating businesses. All the games were on sale but those who played the games received a bigger discount on the games they bought. This year, they had two new businesses join in: a pizza restaurant and a new bar/restaurant, each of which got samples of games for people to play there; players also got a ticket for a discount at those stores.

“The event got the word out that people can buy games here and at the gift store up the street,” said Jones. “The news was out that we have games in Hardwick now, so you don’t have to order them online, you don’t need to buy a checkers board at Rite Aid. It’s been very successful for us.”

When it comes to staff training for selling games, Dickinson said he spends a lot of time thinking about exactly how much he, his wife, and his two part-time staff need to know about the games they are selling.  “We decided that for our staff, if they know the basic terms and a few certain types of games, then that was going to be enough. This way, they could sell games as well as they could maybe sell a book that was another person’s staff pick,” Dickinson said.

He also recommended visiting YouTube to find videos on how to play specific games, which can be helpful for teaching staff. There are also longer videos where people play through the entire game in 45 minutes or so. Game trends that are big at Aaron’s include the store’s seven ongoing Dungeons and Dragons groups, but it is also a challenge to keep up on the latest news about new games, which can be just as important for sales as evergreen, bestselling games like Settlers of Catan, Ticket to Ride, and Pandemic.

For his part, Briseno recommended reaching out to distributors to acquire demo games at a discount, which he said can make a big difference when it comes to improving the customer experience. “We live in a world where we are all live on our phones, and the comments I’ve gotten the most in my restaurant is that people are off their phones interacting with each other, talking to each other, having fun. That is super valuable and it makes people have a positive outlook on the business,” Briseno said.

Also, when people are looking to buy games, said Briseno, they want to see what they are buying, especially since some modern games can be a little pricier than the mass market games people are used to buying from Target and other general retailers. To have a demo and look at what’s inside, to see how they like it and play through, really helps to sell those games in the retail section and actually make a profit.

Dickinson said that while he typically doesn’t carry high-price-point games, he is happy to order them for people, while Briseno said that his top 10 games tend to retail for around $50; though, he said, for families, anything over $20 is bound to create sticker shock.  In terms of distributors, Briseno and Dickinson each use ACD and Alliance, two relatively large distribution companies, as their main suppliers. Each of these usually have demo copies available, although there is a significant minimum for free freight. To combat this, Dickinson said he makes sure to time his orders. On the other hand, Jones, whose store is smaller, said she hasn’t had any big sellers over $30; she also makes sure only to work with distribution companies that let her buy singles of games.

“Since we are small l don’t have a lot of money to invest in huge inventory, so one of the first things we found was buying 12 copies of one game was not feasible for us,” said Jones. “This means we had to really look for places where we could buy single copies or maybe two or three copies of games, so we looked at Continuum Games, which was great that way.”

When it comes to ordering the right product mix for their community, booksellers should remember that the game industry is as vast as the number of genres in books, said Dickinson, “and you can’t keep up with every new game coming out, just like you don’t know every book that comes out.”

One of the biggest differences between the book industry and the board game industry, though, is that “a game can be out of stock for up to eight months at a time, and sellers just have to be ok with the fact that they are not going to have that game,” said Dickinson. According to Dickinson, some companies are comfortable with having their game out of stock for a while, because they believe it builds excitement.

“We complain about how long it takes to get the Michelle Obama book back in,” he said, “but if I have to wait six more months to get Pennsylvania Ticket to Ride back in, then I’ve got a line of people waiting for it when it arrives. It’s just a different mindset. Figure out how you’re going to get your games, what kinds of games you’re going to carry, and then tell folks what other games you can get for them. Just like you’re not going to carry every romance novel or every mystery if that’s not your genre, you may not have it in stock but you can get it for them if they need it.”

Booksellers can also reach out to individual game publishers to find specific games, so if you see a game you like, find out who publishes it.

For more information about GAMA and what they offer their retailer members, booksellers can visit the organization’s website.