Wi14 Education: Do We Need to Talk? Surviving the Political & Cultural Divide With Your Co-Workers

Panelists at the American Booksellers Association’s recent Winter Institute education session “Do We Need to Talk? Surviving the Political & Cultural Divide With Your Co-Workers” discussed how booksellers should navigate personal and professional pressures in today’s divided political climate.

The panel was moderated by Robert DelCampo of the University of New Mexico in Albuquerque, New Mexico, and featured Bradley Graham of Politics and Prose in Washington, D.C.; Amanda Ibarra of Flyleaf Books in Chapel Hill, North Carolina; Lane Jacobson of Paulina Springs Books in Paulina Springs, Oregon; and Angela Maria Spring of Duende District Books in Washington, D.C., and Albuquerque, New Mexico. 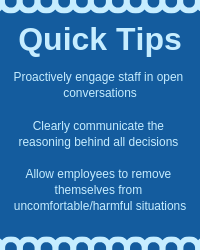 During the summer leading up to the 2016 election, “emotions were running high in Washington, as they were in the rest of the country, over a series of police shootings of unarmed black men in Louisiana and Minnesota,” Graham said. The shootings had given rise to a number of Black Lives Matter protests around the country, and at the same time, he noted, there were the killings of white policemen in Dallas, Texas.

One way Politics and Prose chose to respond to these events was by creating a curated book display; however, he and Spring, who had been working as a manager at P&P at the time, faced some disagreement “over what to call the display,” Graham said. While the store ended up calling the display “Race and Violence in America,” Spring believed the display should simply be called “Black Lives Matter.”

“This was a really important moment in my career as a bookseller and also in my own personal identity,” Spring said, adding that she had been Graham’s employee for years and, before this, they’d never had a conflict. “I was managing a staff that, at the time, I think, had the most people of color that had ever been on the floor staff of P&P. I just felt like I was failing them in some way...It was hard for me as a person of color.”

Graham said he wanted to call the display “Race and Violence in America” out of a commitment to “try to be as balanced as we could be,” which he pledged when he first assumed store ownership seven years ago. “I’ve since shifted,” he said. “In this environment, there often isn’t an ‘other side’ worth presenting or listening to. That may sound harsh to some people, but the lines of what’s right and wrong right now have gotten very clear. In the case of this display, I wasn’t inclined to put up Blue Lives Matter either; there wasn’t an equivalent that I had in mind.”

At Flyleaf Books, the political climate also impacted conversations that were occurring in-store. This was particularly true during the height of the #MeToo movement, when allegations against Junot Díaz, who was then the fiction editor of The Boston Review, were brought forward. Ibarra recalled asking the staff at Flyleaf what they thought of the situation.

“I introduced it because I wanted to hear what everybody thought and what their reactions were,” she said. “That led to a somewhat tense discussion. We were trying to decide whether we would stock his books, and we were split. It got to the point where, out of respect for each other, we decided to take a step back.”

It wasn’t just Díaz who was an issue, Ibarra added, as allegations of sexual misconduct were brought forward against other authors during this time. This led to many individual conversations, she said, that were all discussed on a case-by-case basis. As a bookstore, the staff needed to consider what the potential loss of those sales would cost them in the long run.

“I don’t think we had any big blowout,” added Jacobson, who worked at Flyleaf at the time, “but it was definitely an ongoing conversation of varying degrees of severity.”

Booksellers obviously have a very personal relationship with books, Jacobson commented. “We want to be very proud of the things that we’re selling in the store. It’s a business decision, but you can’t strictly frame it as that,” he said, noting that booksellers can feel emotionally connected to certain books and situations. “It’s important to recognize that even if you have just one staff member that dissents from the group’s opinion, you’re probably going to have some customers who feel that way as well.”

Jacobson said that in his particular situation, he felt he could have been more attentive as a manager at Flyleaf. While he always had an open-door policy with his staff, sometimes “it isn’t good enough,” he said. “Part of being a good manager is proactively engaging your staff on these issues and sometimes pushing them out of their comfort zones to be sure they’re being open and honest with you about how they’re feeling and about the way you’re handling these situations, so that these things don’t fester.”

DelCampo said the culture of independent bookstores as it pertains to handling issues like these is unique because the identity of a bookstore’s owner and employees is completely ingrained in the store itself.

“We talk about having boundaries between your work life and home life, and every industry has a different level of permeability between these boundaries,” DelCampo said. “This is an industry where there really is complete permeability and transparency.”

“[This] can be a tremendous asset to the industry,” he added, noting that when booksellers have an issue with their boss, like in the case of Spring and Graham, they can often opt to have an open discussion about it, rather than fear termination over a disagreement. “But it also increases the necessity for tremendously good communication skills, and probably a structured way to make these [conversations] happen.”

DelCampo recommended that booksellers who are looking for the best ways to tackle these issues in their stores think about it in terms of what is referred to as “organizational justice” in industry psychology. Essentially, he said, “what we do is we look at outcomes and how people feel about decisions that are made.”

“What we know is that distributive justice, which is what the decision/outcome is, is less important than what we call interactional justice and informational justice,” DelCampo said. “What people prefer is to understand the information used to make a decision, and to have that information discussed with them in a way that they understand.”

He also recommended that managers and owners thoroughly explain their reasoning behind any decision that is made to help employees understand the rationale, and Spring and Jacobson noted that booksellers should be given the opportunity to remove themselves from an uncomfortable environment if a decision does not go in their favor. “Even if the decision is particularly contentious,” DelCampo said, “you’ve made it known to yourself what the ramifications will be, and [will be better prepared for] damage control.”