This week, bestselling author Margaret Atwood appeared in conversation with Erin Morgenstern at the 2019 Winter Institute in Albuquerque, where she reflected on her long and prolific career, beginning with her first book signing, for The Edible Woman, at the end of 1969. The event, she said, took place in the men’s sock and underwear section of a department store.

“It was November or December and they were wearing galoshes, and I heard the stampede of galoshes going the other way,” Atwood said, giving the audience a peek at her dry sense of humor. “It was the publicist’s first week on the job. I think she thought it was near an escalator, so people would see me there and buy the book. That is not what happened.”

Like Morgenstern, who will be publishing her second novel, The Starless Sea (Doubleday), in November, Atwood went on to publish her second novel, Surfacing, in 1972, followed by Lady Oracle, Life Before Men, Alias Grace, Oryx and Crake, Cat’s Eye, the MaddAddam Trilogy, and other titles. 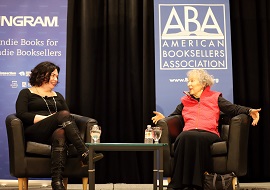 Atwood’s forthcoming book, The Testaments (Nan A. Talese/Doubleday, September), is a sequel to her 1985 title The Handmaid’s Tale, which in 2017 was released as a television series on Hulu. The story features a totalitarian regime that has forced a group of fertile women called “handmaids” to produce children for elite barren couples.

When The Handmaid’s Tale was first published, Atwood said, English readers, having already had a religious civil war in the 17th century, chuckled and called it a “well-done yarn.”

“The Canadians, being nervous by nature,” she continued, “said it couldn’t happen here. And I said probably not because Canada is too diverse, so it would be hard to get a monolith going.  But in the United States, there were two different reactions. Number one: This will never happen here. (Wrong). Number two: How much time have we got?”

At that time, she said, somebody spray-painted a wall in Venice Beach with the words, “The Handmaid’s Tale is already here.”

The 2016 election, Atwood went on, changed the way people viewed not only The Handmaid’s Tale but our world at large.

Today, the iconic image of the silent handmaid dressed in a red cloak and white bonnet, which Atwood said she visualized clearly when she wrote the book, has become a recognizable political symbol used in both popular culture and in protests.

“Nobody can kick you out. You’re not saying anything, you’re not causing a disruption,” Atwood said on why it’s become popular in the context of protests, “and they also can’t say you’re dressed immodestly.”

Atwood noted that the 2016 election results also changed the way people would ultimately view the Hulu series, which was already being filmed at the time. “[The producers] woke up on November 9 and they all said to themselves, we are now in a different show,” she said. “Nothing changed in the show, but the frame changed and the frame around the book has changed.”

That election also influenced how Atwood decided to write the book’s sequel. Though she couldn’t share much about the highly anticipated release, Atwood did tell booksellers that there will be a cover reveal for The Testaments on January 30, and that the book features three narrators and takes place 16 years after the end of The Handmaid’s Tale.

Morgenstern asked Atwood if she always wanted to return to The Handmaid’s Tale, which in addition to an award-winning television series has been adapted into an opera, a ballet, and multiple films; in March, it will be published by Nan A. Talese/Doubleday as a graphic novel hand-illustrated by Renee Nault.

If the election hadn’t resulted in the way it did, she added, “there would be a different way of viewing all of this. It would have been, ‘Look what we avoided.’ It’s not that anymore.”

In spite of the occasional somber note that punctuated Atwood and Morgenstern’s witty and entertaining conversation, Atwood ended the keynote with an optimistic thought: “I think this is very uplifting. We’re all still in this room. There are still books; people are still reading them. And I think part of the uptick in books is because that’s one of the places people go when they feel under political and psychological pressure. It is actually quite helpful to know that people have been through similar things before and have come out of them.”