Wi14 Keynote: Reshma Saujani on How to Be Brave, Not Perfect

Reshma Saujani, whose book Brave, Not Perfect: Fear Less, Fail More, and Live Bolder will be published by the Crown Publishing Group’s Currency imprint on February 5, appeared as a keynote speaker at the American Booksellers Association’s 2019 Winter Institute in Albuquerque, where she discussed the importance of teaching girls to take risks and not fear failure, rather than pursue perfection in all things. 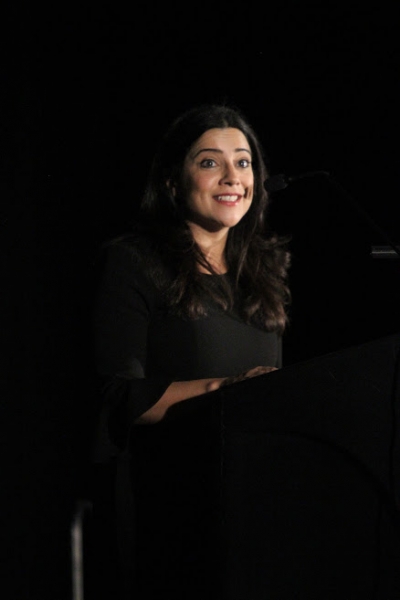 Saujani is the founder and CEO of the nonprofit Girls Who Code, which aims to close the gender gap in STEM fields and encourage girls to explore computer programming; she is also the New York Times bestselling author of the 13-book Girls Who Code series. Inspired by her popular 2016 TED Talk, Saujani’s newest book features girls and women across the U.S. talking about their professional and personal stories of bravery, and provides everyday strategies for taking more risks and avoiding unhealthy perfectionism.

In her keynote speech, Saujani traced the development of her “obsession with being brave,” as she put it. At age 33, Saujani was working a soul-crushing job as a financial services lawyer and wondering why she was so absolutely miserable. In her mind, she had done everything right: attended Harvard’s Kennedy School of Government, gone to Yale Law School, gotten straight As. One day, fed up, Saujani walked into her boss’ office and quit to pursue something she knew in her heart would make her happy: running for Congress. 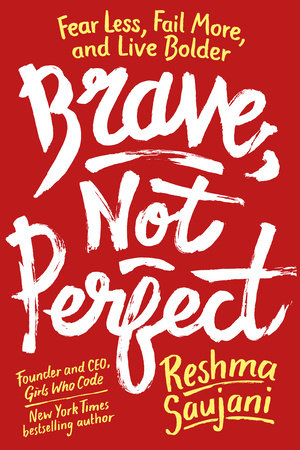 She told booksellers that her 2010 Democratic primary campaign for the 14th Congressional District of New York was the best 10 months of her life. Despite weathering a humiliating primary loss to long-term incumbent Carolyn Maloney, Saujani had finally done what she had pledged to do as a little girl: to serve the country that saved the life of her parents, Indian immigrants who escaped Idi Amin’s Uganda in the 1970s.

“I tell you this story because I was 33 years old, and when I ran for Congress, it was the first time in my life that I had done something that was truly brave,” said Saujani. “And I often ask myself, what took me so long? And what took me so long was that before then I thought that if I tried something and I failed, that failure would break me.”

In learning more about the bookselling industry, Saujani talked to a number of indie booksellers who identify with that same anxious feeling; one bookseller she spoke to lives in such fear of missing an e-mail, she refuses to put up an “out of office” message. “It’s not easy being an indie bookseller today, and this fear of failure looms so large for so many of you,” Saujani said. “And the stakes are high when you’re running up against high rent or Amazon or minimum wage [issues].”

Saujani identified three myths of perfection for her audience of booksellers: one, polished equals perfect; two, once everything is perfect, I’ll be happy; and three, if I’m not perfect, everything will fall apart. When girls are taught to buy into this mode of thinking while growing up, she said, it can have long-ranging negative consequences. While men may feel this same pressure too, Saujani said, women especially suffer because it is a societal, structural problem. The idea that we raise girls to be perfect and we raise boys to be brave was the topic of her TED talk, which has been viewed more than four million times.

In her presentation at Winter Institute, Saujani showed a video in which British psychologists gave a group of boys and a group of girls a glass of salty-tasting lemonade to see if they would be honest in reporting the taste. In the video, the results were as predicted: while the boys volubly expressed their disgust, the girls pretended to enjoy the drink. Saujani attributed this result to our tendency to encourage perfectionism in young girls — in this case, being polite and people-pleasing.

Saujani recently saw this play out in her young son’s swimming class, in that the boys were more likely to be praised for diving into the deep end, while the girls were not encouraged to take those same risks. This kind of instruction, said Saujani, arises from the mistaken cultural belief that girls are too fragile to handle failure or rejection.

“Here is the problem,” said Saujani. “If you’re wired from that age to be perfect and you’re not taught to fail, you become terrified to fail. With men, by the time they are adults, whether they are negotiating a raise or asking someone out on a date, they are literally habituated to take risk after risk after risk.”

“Women are taught to feel like when we are rejected, we are being judged or embarrassed or being told that we got it wrong,” she added. “That trains us to holds ourselves back from anything we aren’t guaranteed to succeed at to avoid pain and humiliation before we even try. We give up before we even try.”

These faulty messages ramp up even more when boys and girls become teenagers, emanating from all sides — from well-meaning adults and teachers, from media messaging, and from their peers via social media. In today’s culture, teen girls are encouraged to perfect themselves, while teen boys are encouraged to explore the world around them.

“All of this coddling and protection is hurting us as women, and we are literally suffering as a result. We are being steered away from using our voices, we’re trained to people-please and to choose activities where we can shine, and we’re always taught to take the straight and narrow,” she said. “Some people may have told you that you were crazy to open an indie bookstore in this day and age, but you did it anyway, you chased your dream anyway. But far too many of us have other dreams, and we have so much anxiety about fulfilling them because we are so scared about what will happen if we fail. And the pressure to do everything perfectly is literally crippling.”

While objectively there has never been a better time to be a woman in society, for many, today’s environment has never felt scarier, Saujani said. Women’s happiness is at an all-time low, and women are twice as likely to be diagnosed with anxiety and depression. And when it comes to the current state of female leadership in this country, said Saujani, Congress is made up of 23 percent women, Fortune 500 boardrooms are 22 percent women, and Fortune 500 CEOs are only 2 percent women.

To solve this deficit, said Saujani, we as a society need to bridge the bravery gap between men and women, which serves to increase the level of inequality in the U.S. This gap is why women can be underprepared to succeed in the workplace, even though they statistically outperform boys in STEM subjects, and 50 percent of those graduating from college today are women. Again, the reason is cultural: getting good grades is not the skill that translates best to the workplace: bravery and risk-taking are, so men tend to have an easier time taking credit for their ideas at work, asking for a raise, and more.

“At a time when we are depending on women to be the breadwinners, we are pushing them out of the industries that will pay them the best and that will help them build the future,” Saujani said. But as CEO of Girls Who Code, she has seen examples of how change is possible, like one girl who created the Rethink app, which monitors cyberbullying in group texts, or another whose father’s cancer prompted her to create an algorithm that determines if a tumor is benign or malignant.

“I learned that in teaching girls to code, I had also taught them how to be brave,” said Saujani; coders need to try lots of different ways around a problem, she explained, which can be frustrating for those expecting instant mastery. “By teaching girls imperfection through coding, by teaching girls failure through coding, it has turned them into superheroes, into the changemakers they thought they could never be.”

Saujani concluded her presentation by inviting all booksellers, male and female, to practice the “brave, not perfect” model themselves. It is never too late to begin being brave, she added. “I think that if we ignite a bravery revolution,” Saujani said, “if we start learning how to use our voice, if we stop people-pleasing, we start telling people what we really think, if we start taking these moments to live life for ourselves and not for others, I really believe that anything and everything is possible.”