The “Black Female Entrepreneurship: Bookselling and Literacy as Resistance” 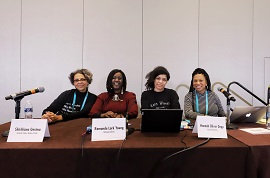 Young shared that she and her husband started MahoganyBooks in their apartment in Alexandria, Virginia, 12 years ago. The business was initially based online, and two years ago, the store opened its physical location in the Anacostia neighborhood of Washington, D.C. “It was important for us to create a space that reflected who we were and that focused on community, culture, and conversation,” she said. “That’s why MahoganyBooks was started — we felt like there was a space needed to make Black books accessible.”

One of the main reasons they opened a store in Anacostia, Young said, was that the access to books in that area was particularly low. “They didn’t have a bookstore. It had been about 20 years. And that community not having books was huge to us, because if you cross over the line, there’s bookstores everywhere in D.C.,” she noted. “But why not this community that works just as hard as everybody else? They deserve access to literature and books, too.”

Depp shared that growing up, she visited Politics & Prose in Washington, D.C., often. “I ended up being a bookseller there and in the middle of my degree, realizing the effect I had on what books were getting shelved, what books were getting sold, what books I was learning about suddenly...I became incredibly interested in the process of bookselling and independent retail,” she said, noting that she began consulting to other bookstores while working full-time as a bookseller at Politics & Prose and WORD Bookstores in Brooklyn and Jersey City.

But she missed her home in Silver Spring, Maryland, which is the fourth most diverse city in America in addition to being a huge immigrant city, Depp added, as well as her home in the Petworth neighborhood of Washington, D.C. At the time, Petworth was also about to lose a bookstore. “I wanted to have a space for those who had long been in that community and were new to that community, and had a lot of questions about what role they were playing in gentrification,” she said.

Gerima shared that Sankofa began in 1998 when she and her husband were looking for a space to produce movies. After finishing and distributing a movie called Sankofa, the two went on to open a store across from Howard University that rented VHS tapes, which eventually became a bookstore, too. “We wanted good Black books and good Black movies to be on the same shelf, so that viewers would think that movies need to be good, too,” she said. “We can expect more from our filmmakers.”

Today, Sankofa stocks more books than movies and has partnered with a café that “names its sandwiches after Black filmmakers from around the world,” Gerima said, noting that the store also hosts many events. “Howard University students come to mingle with each other, to read the books, and also to see movies and have open mics.”

Young said that indies have a special reach in helping local communities. “When we opened our store, we wanted to reflect our values and our sensibilities,” she said, noting that her store focuses on what customers see, hear, and smell when they enter MahoganyBooks.

She also shared an anecdote about a customer who stood in her store and cried. Young’s husband asked him if everything was okay, and the man said, “I’ve never in my life seen this many Black books.” Customers can go online and see books by Black writers, Young said, but “when you walk into a place where you feel heard, where you feel seen, that’s what a physical bookstore can create. I loved working at Barnes & Noble, but I didn’t get that feeling...I had an opportunity to create that feeling for the community I most resonated with.”

Part of what goes into creating that feeling, Depp added, is curation. “I focus on a wide range of marginalized voices in my store, but the point is that I want every person who I had to wrestle to get seen in other places [to be seen],” she said.

Gerima said that she would like Sankofa’s online presence to be stronger, as it would help to market events and sell books. “The in-store presence and atmosphere is so important...I think we enhance that by having our community relationships,” she said, adding that posting to social media helps engage the community.

Black bookstores and Black institutions in general “operate and are committed to a reality that has its own specific characteristics,” she said. “We’re dealing with a post-crack generation... gentrification is attacking us like crazy, the targeting of young people by police is a total reality.”

Those realities often make committing to reading difficult for children, but there are ways bookstores can help, Gerima said, noting her store’s partnership with the Carter G. Woodson Academy of Black Studies at Dunbar High School. “We want students to feel like books are a non-negotiable part of their lives,” she said. “They should feel comfortable coming into the bookstore and know that there are books there that reflect them.”

Young noted that there are studies that show that the self-esteem and confidence of children who see themselves represented in books is impacted positively. And while Depp was often told that her “community would not buy books,” that isn’t the case.

Black bookstores and presses, Gerima added, have been around forever, naming institutions such as Black Classic Press, African World Books, Third World Books, and others.

Edim noted that the origin of Well-Read Black Girl is in political awareness and support, with its goal “to make sure that people know we are here, we exist, and we’re not going anywhere,” she said. “The work that we’re doing reflects our ideologies in a really important and necessary way.”

Young also said that while her store is targeted and focused on the Black community, “these books are not just Black books for Black people.” Said Young, “These books are for everybody. This is American history.”

“We are not a monolith,” Depp added. “You’re going to find different books featured on our shelves. We all have mission statements...and I do feel like my mission is reflected on the books on my shelves.”

The panelists also discussed the legacy their stores have in D.C., in addition to ways their work redefines what Black business can be in D.C. and how to deal with issues such as gentrification.

Gentrification lays lines that tell people to cross or not cross, Gerima said, and the more a store becomes threatened, the more people will show their support. “The Black population in D.C. is decreasing,” she said. “The number of homeless people is increasing. The amount of crime is increasing. So what does that mean for a Black institution?”

For Sankofa, she said, that means people walk through the door and say, “Damn, you’re still here.” Said Gerima, “Sankofa has become a place people want to defend. Historically, you’ll see that phenomenon of pushback. You see the strength in our community and our resistance alongside the pressure, which we have to remember as we go forward. As hard as things get, you can get even stronger.”