Wi15 Keynote: “Bookselling and Liberation: Black Bookstores in America, From the ’60s to the Present”

The 2020 Winter Institute keynote event “Bookselling and Liberation: Black Bookstores in America, from the ’60s to the Present” invited attendees to learn about the operations of Black bookstores in the U.S. throughout history.

Appearing on stage for the keynote were W. Paul Coates of Black Classic Press in Baltimore, Maryland; Shirikiana Aina Gerima of Sankofa Video Books and Cafe in Washington, D.C.; Judy Richardson of Student Nonviolent Coordinating Committee in Atlanta, Georgia; and Nati Kamau-Nataki of Everyone’s Place in Baltimore. The event was moderated by Joshua Clark Davis, author of From Head Shops to Whole Foods: The Rise and Fall of Activist Entrepreneurs (Columbia University Press). 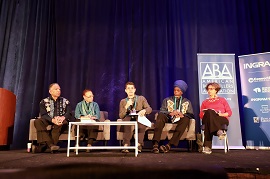 Davis began by sharing a brief history of Black bookstores in the U.S. during the late 1960s, a time of global and national upheaval. In his research, Davis came across a one-page directive from FBI detective J. Edgar Hoover; amidst all that was going on in the world, said Davis, “the ‘menace’ Hoover wanted to warn his colleagues about was Black independent booksellers.”

Hoover went on to encourage the surveillance of Black bookstores. While evidence of this surveillance exists for half a dozen U.S. cities, Davis said, the number is likely higher because official FBI records are not available. Davis was able to uncover FBI records on Paul Coates and his business in Baltimore, in addition to Drum and Spear in Washington, D.C.

“These Black radical bookstores were part of a larger movement,” said Davis, and they emerged from social movements in the ’60s and ’70s, including civil rights, Black power, feminism, environmentalism, and the peace movement.

Black bookstores faced a tremendous amount of legal persecution, but were booming by the end of the 1960s, said Davis. At the start of the decade, there were roughly a dozen Black-owned bookstores in the U.S. By the end of the ’60s that number had risen to about 50, and then to about 75 by the mid-1970s. “These stores promoted African American political education and knowledge of self through journals,” Davis noted. “They lured customers with some of the bestselling titles of Black power of the day, everything from the Autobiography of Malcolm X to Eldridge Cleaver’s Soul on Ice, and lots of chapbooks by poets like Sonia Sanchez and Nikki Giovanni. The stores represented a new generation of Black public spaces and welcomed a wide range of customers from communities, activists, and curious passersby.”

Davis went on to ask the speakers how and why they got into bookselling.

Gerima said that her business, Sankofa Video Books and Cafe, which she owns with her husband, would not exist if it weren’t for Coates of Black Classic Press and Kamau-Nataki of Everyone’s Place, as they were early supporters of her store.

Sankofa began as a place where Gerima and her husband planned to sell the indie films they created, she said, and evolved into a bookstore from there. “We thought it was a fantastic idea to put good literature and good movies together, and then to develop this audience of people who expected high quality for both,” she said. The store is named after the movie she and her husband filmed together just before opening; the store also now has a cafe.

Kamau-Nataki and his wife got into bookselling when they were still students, he shared, and both were impacted by the miseducation in their area and “how it’s connected with [their] powerlessness as a people.” Said Kamau-Nataki, “We thought we could change that by going on the street corners and selling books to young brothers and sisters. That’s how we got into bookselling.”

Richardson, speaking on behalf of the organizers of the Student Nonviolent Coordinating Committee (SNCC), said that she and other organizers had been working in the Southern civil rights movement since the 1960s, and had then moved to D.C. in 1968 to continue that work in other ways.

“All of us who started Drum and Spear Bookstore saw it as an extension of the work we’d been doing in SNCC and the Southern movement,” said Richardson. SNCC began as an organization of young people who started the sit-ins in 1960 on Black campuses around the southern U.S., who were then brought together by Ella Baker.

Said Richardson, “In addition to trying to open up public accommodations for Black people, SNCC had two other main goals in the south during the 1960s: One, voting rights — how do you get Black people registered to vote without getting them killed — and two, educating for liberation.”

The Drum and Spear Bookstore was opened by Charles Cobb in June of 1968. Richardson shared a Washington Post headline from the time, which read, “One of the things this bookstore disproves is that Black people don’t read.”

That was one of the perceptions SNCC was countering, said Richardson, who was asked to help with the store. Back then, there were only a few shelves with a handful of books, but it grew to become “the largest African American bookstore in the country” due to the amount of book fairs and events the store holds, she said, in addition to the “burgeoning Black Studies programs that have opened up at a lot of the universities that could buy from us.”

Coates noted that he came to bookselling from the Black Panther Party, which he had grown disillusioned with due to the fact that many people were “in jail and under charges.” Said Coates, “I was lost and floundering as to what to do with them in jail and what to do with my life.”

Partnered with other ex-Panthers, ex-communists, ex-socialists, and ex-Pan-Africanists, Coates said he tried to put together a program where they could do something in the community. Primarily, he said, he was interested in education. Coates put together the George Jackson Prison Movement — named after George Jackson, who’d educated himself through books before being killed in prison — which was built on the ideas that they could establish a bookstore, they would establish a publishing company that would publish books for that bookstore and other Black bookstores in the country, and they would build a printing company that would print the books to supply to the publisher and bookstores.

“It was supposed to work with people coming out of the jails,” Coates said. “We saw it as a way of resurrecting not only those people, but liberating our community that we control...we didn’t have the resources to do it at the time, so the first step was establishing the bookstore.”

Davis also asked the speakers if there was one aspect of their history they’d like attendees to take away from the session.

Gerima noted that “it’s important to remember the continuum.” The role of bookstores is fundamental to a community’s needs, she said, noting that Sankofa came out of the Civil Rights era of Black Nationalism, and that’s what its core inventory covers.

“Our core is from that era because it represents us, and we’re very eager to share that with young people because it was written with them in mind,” she said. “People who were incredibly oppressed wrote for the next generation. And so, a good bookseller makes sure that the next generation gets access to what was left behind for them.”

Kamau-Nataki noted that “the relevance of the history of our bookstore is only really applicable if I could show another person, in my circumstance and in my area, how to open a bookstore and be successful.”

Everyone’s Place has been in the same neighborhood for 35 years, he added, “and the major activity you notice...is drug use and drug sales. That’s the reality of the neighborhood, but still, none of the young brothers or even older heads come around our bookstore and sell anything.”

That shows the importance of a bookstore in a neighborhood, he said, noting, “As bad as some people may think [the neighborhood] is, the people who you look down are the people that probably respect the bookstore the most.”

Richardson shared a story of a Scholastic sales rep visiting Drum and Spear who expressed not knowing her store “was a Black bookstore” after she identified a title she’d like to purchase. “That meant non-Black bookstores were missing out on gorgeous books,” she said, because they weren’t regularly being recommended. “These books are for everybody.”

And Coates noted that in his 44 years of publishing and bookselling, he’s met great people. “One of the reasons I was able to come up with this platform of publishing and bookselling is because Drum and Spear existed in Washington, D.C., and I was able to look at the model it created for the bookstore and publishing house,” he said, also thanking Publishers Group West, Kamau-Nataki, and Gerima. “Nati operates the best-stocked Black bookstore in the country...and every single day you’ll find people from the African Diaspora passing through [Sankofa]. All over the Black world will pass through that store, and at any given time, you’ll find people delivering presentations and news, information from the Black world that keeps us current.”