Ryan Raffaelli, an assistant professor in the Organizational Behavior Unit at Harvard Business School who examines how innovations transform industries — including bookselling — appeared as a keynote speaker at the American Booksellers Association’s 2020 Winter Institute in Baltimore on Wednesday, January 22.

Raffaelli began researching the resurgence of independent bookstores in 2012. His research process included 258 interviews and focus groups with bookstore owners, publishers, and prominent authors; in-person field visits to dozens of bookstores in 26 states; an analysis of 915 newspaper and trade publication articles that mentioned independent bookselling; and even attending a Paz & Associates course on how to open a bookstore. A white paper with his full findings was distributed at the keynote and is also available online. 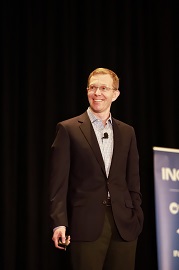 Ryan Raffaelli during his keynote address.

Throughout his career, Raffaelli has looked at many companies that have faced a technological shock where they’ve had to step back and evaluate how they should reinvent when the only options seem to be holding on or letting go. Said Raffaelli, “The challenge for reinvention, particularly in the retail space, is that it requires established organizations to respond to multiple shocks that impact and affect the core business, the identity, the capabilities, and the cultural values of organizations.”

In 1990, he noted, the end of independent bookstores was predicted; booksellers would continue to struggle through the 2000s. But from 2009 to 2018, there was almost a 50 percent growth in member stores in certain areas. Raffaelli tracked the indie resurgence from 2010 onward to see how exactly bookstores were able to bounce back.

Raffaelli noted some key findings that he believes are what have supported the growth of the indie channel:

● Community. This centers on the belief that shopping local is something to be preserved, protected, and valued, and bringing the consumer along on that journey is just as important as telling them about it. In the book industry, community isn’t something that necessarily happens just in the store, but is a national movement that has moved to multiple platforms and channels, both online and in-store.

● Curation. Raffaelli noted that booksellers were using this term well before it became ubiquitous in retail. Hand-selling, and particularly the joy it brings customers, is something that corporate retailers are unable to replicate, he noted. This helps booksellers compete with the algorithms that miss the human connection.

● Convening. Booksellers have been able to exchange ideas and create avenues for conversation that become the cornerstone of communities. Bookstores offer an escape from digital fatigue. They also engage with each other, sharing all their best practices to make the industry stronger as a whole.

Store-level changes can start with an experimentation of old and new practices, and then those practices get attached to the “shop local” identity, which consumers appreciate because it has a value system. Raffaelli also talked about the important role that ABA and the regional trade associations played in cultivating a common identity and shared best practices among booksellers at events like the annual ABA Winter Institute and other regional conferences.

“It doesn’t stop there because you have mechanisms in place in this industry where the ideas get shared through industry conferences like this, and then because of that those practices get diffused back into bookstores, and, potentially, new bookstores open with those practices as their template,” he said. “It’s my belief that these processes have been core to the regeneration over the last 10 years in this sector.”

While margins are thin, living wages are critical, and rent costs keep going up, he noted, there are ways to navigate these challenges. He centered his recommendations around several questions pertaining to the “Three Cs” above, which included:

● How are booksellers communicating the value of community for the next 10 years?

● From a curation perspective, how much are booksellers focusing on the experience they provide consumers rather than simply competing on price and inventory numbers?

● How will you continue to bridge both the physical and digital worlds?

Raffaelli closed his talk by looking forward at industry-specific challenges based on his data as well as ways booksellers can address them:

● Submit to ABACUS. “You must complete your ABACUS surveys,” he told the assembled booksellers. Strong industries are often built on the idea that they share and contribute to the data that helps make sense of how well the industry is doing as a whole. Because of that, industries are able to diffuse practices and trends around that data. Without a strong ABACUS response rate, Raffaelli said the industry will be at risk of the next trend as corporate retailers rethink their strategies and make competitive gains.

● Measure the industry by health and not performance. Performance is what a business does to deliver improved financial results, and health is the business’ ability to renew itself. While it’s a positive trend that the number of indie bookstores has increased by 50 percent in the last 10 years, Raffaelli characterized that as a measure of performance and not health because margins, profitability, and other indexes vary widely in this industry.

○ Additionally, instead of strictly looking at employee retention, booksellers should consider employee commitment. Raffaelli identified this as one of the secret ingredients of the indie resurgence.