At the 2021 Virtual Winter Institute, American Booksellers Association CEO Allison Hill joined futurist Brian David Johnson, author of The Future You: How to Build the Life You Want (HarperOne) for a keynote discussion about the future of bookselling and how booksellers can shape what happens next.

Booksellers can view a recording of this session on the Education Resources page on BookWeb.org.

Johnson kicked off the discussion by explaining that as a futurist, he works with organizations and individuals to look into the future — one to five to 10 years out — to model both positive and negative futures. Then, as an applied futurist, he does something called “backcasting,” which determines the steps one should take to move toward the future they want. This process looks different for every kind of business. 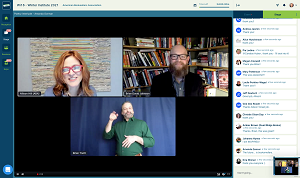 “I have lived my life in independent bookstores,” Johnson said, sharing that in college, he spent all his money for food on books. “I’m a fan of bookstores. But I don’t know your business. This is really important in the work that I do as a futurist — I would never come to you and say, here is your future...I can’t tell you your future, but what I can do, and what I have been doing for the last 25 years, is I’ve been working with individuals and companies to say, well I can give you the tools and the process to think about your future.”

The futurecasting process begins with the idea that the future isn’t set, and that everyone should be an active participant in their future. “It’s not a fixed point on the horizon that we’re all running towards, helpless to do anything about,” Johnson said. “The future is built by people.”

Booksellers should then craft their vision of their future self into a narrative, Johnson said, which can be shared with others to determine the people in their life that will help propel them toward that specific future. Part of this process also includes finding the tools needed to achieve that future, such as technology or organizations, in addition to finding experts who have achieved something similar to their vision.

After doing that work, Johnson said, it’s time to backcast to figure out how to achieve those goals. This can make the future feel far away or too difficult to obtain, but Johnson encouraged booksellers to ask themselves what will get them just part of the way there at first.

“What are the one or two things you can do where you wake up and take the tiniest little action?” Johnson asked. “That tiny little action connects to all the other action that gets you to the future that you want.”

“I love that we’re focused on action,” said Hill. “It’s important to point out that your book is not The Secret. It’s not about envisioning the future, then sitting back and letting things come to you. It’s about taking action, taking steps toward the future that you want to realize.”

When preparing for this talk, Johnson said he talked with booksellers about how tough the past year has been; embracing the hardship of the past is essential to figuring out what’s next. “I talked to booksellers all across the United States...and in that I asked them what they wanted to avoid. What was worrying them?” he noted. “It’s a good place to start, to get those worries out, because then you can say, okay, that’s where you don’t want to be. Where do you want to be?”

Hill said that can sometimes be the hardest part. “It’s easy for me to imagine the future of ABA and say, I want it to be successful, or I want it to help the booksellers,” she noted. “But specifically, what do I want it to be? That process of thinking in terms of specificity is very important.”

In terms of what to keep in mind when planning for the future, Johnson noted that, eventually, there will be an upward economic climb, and part of the planning booksellers should start doing is how they would like to take advantage of that.

Said Johnson, “Figure out what to do with that boom, so when things do start to normalize and we start to plateau, you’ve gotten a little bit closer to that future you want.”

For now, booksellers should focus on one thing: time. “Give yourself time,” said Johnson. “I do a lot of work with the military and the United States Air Force to get the next generation of leaders to pause.”

It isn’t often that leaders take the time to pause in tough times and reflect, he added. “And this is what we push people to do — if you pause and reflect, you actually make better decisions.”