Williams' Book Store to Celebrate a Century of Bookselling 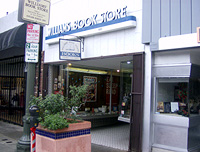 There was hardly a time in Anne Gusha's life when she wasn't either a customer or a bookseller at Williams' Book Store in San Pedro, California. She first walked into the bookstore in 1928, when she was eight years old, and never really left, graduating from customer, to staff, to co-owner. Next month, Anne and her son, Jerry Gusha, who bought the business together in 1980, will celebrate Williams' Book Store's centennial with a weekend-long party, snacks, and author readings.

"We're going to be good to our customers because they've been good to us," said Anne Gusha. During the January 23, 24, and 25 celebration, the store will be offering 25 percent off books and 10 percent off magazines. "We'll have refreshments and drinks, and authors here most of the time. We'll have Angi Ma Wong, who wrote Reggie: My Story (Pacific Heritage Books), about the alligator that got loose in L.A., and we're hoping to get Ray Bradbury."

Gusha, who keeps a full schedule, is 89 years old and doesn't mind telling people her age. "Ten years ago, it would have bothered me," she said. "Now I'm proud to have made it. And I'm active. I'm the chair of the Chamber's Beautification Committee, and my son just got through being president of the San Pedro library. We're both very oriented toward beautification and the community." And between them, Anne and Jerry Gusha offer customers more than a hundred years of bookselling experience.

Anne Gusha recently recalled the store's original owner, E.T. Williams, who ran a bookstore in Wales before moving to London and then to the U.S. In the beginning, Williams didn't approve of her reading taste. "He would ball me out for reading Zane Grey and Kathleen Norris. He told me I should be reading more literature," she explained. In college, Gusha took literature classes while she worked part-time at the bookstore. She abandoned Grey and the Norris romances and gave up bestsellers, too. "Most of them I didn't like," she said. 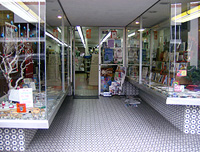 Although Williams' Book Store has moved several times during its 100 years, it has always been in San Pedro, a beach community within Los Angeles, and today proudly proclaims itself L.A.'s oldest new bookstore. In its current 1,400-square-foot location since 1988, the general bookstore features foreign language newspapers and magazines, maps, and travel books, as well as harbor area history and comic books.

Williams' Book Store has had its share of famous customers -- Charles Bukowski was a regular. "Bukowski used to come in all the time," said Gusha. "I wouldn't say he was my favorite author. It wasn't until after he died that his wife told us that he used to come in and sign his books, and we never knew it." Actor Charles Laughton also stopped by, and even took a turn behind the cashwrap. "I had just come back to work after having a baby, and I was in the store alone. Charles Laughton came in the store, saw that I was busy, and helped ring up books."

What helped Williams' Book Store survive the Great Depression, and will help it through the current economic downturn, Gusha believes, is attentiveness to customers' needs. "Customer service is what's kept us going," she said, adding that tough times require more than great personal service. "With all the online business, you have to kind of change the way you've been doing things. I might start stocking book-related things. But I'll always stock books. Reading a book on a computer is not the same thing as holding a book in your hand. But everything has to change -- nothing stays the same." --Karen Schechner